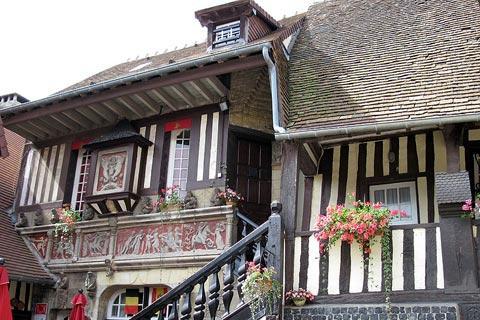 The Normandy town and resort of Dives-sur-Mer is found in the Calvados department of Normandy, just across the Dives estuary from Cabourg and Houlgate.

The town is best known for being the place where William the Conqueror set off for his conquest of England in 1066, although it is now hard to imagine a great fleet setting off from the quiet little fishing port at Dives-sur-Mer.

There is now a modern pleasure boat harbour at Port Guillame, from where you can take pleasure or fishing boat trips, and a daily market where you can buy fresh fish. 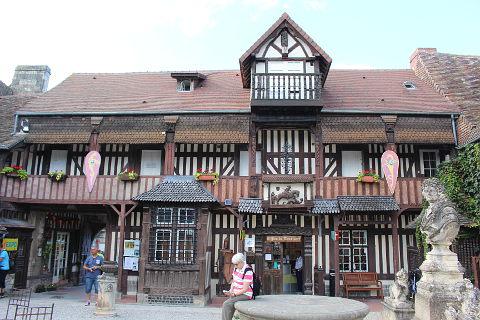 On the other side of the main road (I nearly drove straight past it) is the most interesting part of Dives-sur-Mer for visitors - the sector called the 'Village of William the Conqueror'. This charming quarter is now a magnet for artists and artisans and with picturesque and often ornately decorated medieval half-timbered houses - or 19th century recreations of medieval style houses in some cases, when much of the centre was created, around the original 'auberge of the Royal Sword'.

Visitors to the auberge inlcude Henry IV and Marie de Médicis. At the end of the 19th century Monsieur Le Rémois, a rich art lover, arrived and set too decorating the houses with wooden sculptures and the courtyard with vases and busts from the 17 and 18th centuries.

I was totally unprepared to find this charming medieval centre on the other side of the discreet stone gateway you pass through to enter. It is very touristy now but a treat to visit nontheless.

The 14th century market hall is the other main notable monument and still used for the Saturday market in Dives-sur-Mer. This a substantial half-timbered building with incredible carpentry work in the roof. This is held up by 66 wooden pillars each on a stone base to protect them from damp. You might not notice when you visit, but the market hall was actually open-sided until quite late in the 20th century, when the walls were constructed using the traditional methods for a half-timbered building.

Also on the market square you can see the 17th century Maison de Bois Hibout, a substantial stone manor house on five levels.

The Church of Notre Dame was originally a small roman church built in the 11th century but was largely replaced in the 14th century by a grander gothic style church. Highlights of the church include the carved stone sculptures around the entrance and the stained glass windows.

The origins of the church relate a legend that in the year 1001 local fishermen found a statue of Christ in their fishing nets, that started to bleed when the wood was chopped. The statue was without a cross, but then a cross was discovered in the sea three years later that perfectly fitted the statue. The miraculous statue and cross were placed in a chapel at the church which became a popular pilgrimage destination. Unfortunately the statue went missing during the Wars of Religion and the church no longer attracted pilgrims.

Also in Dives-sur-Mer you can see the Maison Bleue, an unusual garden featuring a remarkable number of mosaics and decorated objects and structures by an artist called Da Costa. There are also several grand 19th century villas to admire in the older part of Dives-sur-Mer. Our favourite is the Maison Les Bossettes at 26 rue du Port, a substantial brick villa very reminiscent of the villas in the ville d'hiver in Arcachon. 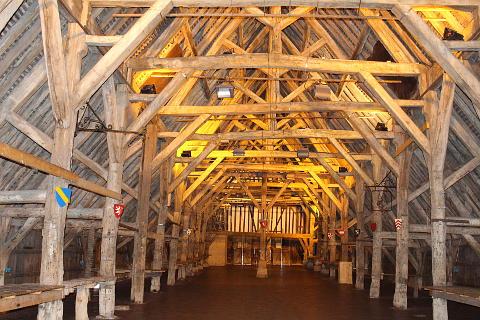 There are several good beaches close to Dives-sur-Mer, including those at Cabourg and Houlgate, just a little way to the north, and elsewhere along the Normandy Cote Fleurie.

We also recommend you take an excursion to visit Deauville, about 20 kilometres north-east of Dives-sur-Mer and an interesting resort with an excellent beach and promenade.

See more of the popular Normandy beaches and resorts

Map of Dives-sur-Mer and places nearby

Visit near Dives-sur-Mer with France This Way reviews

Plan your visit to Dives-sur-Mer, Calvados

A seasonal market is held in Dives-sur-Mer on Tuesday. (Markets are held in the morning unless stated.)