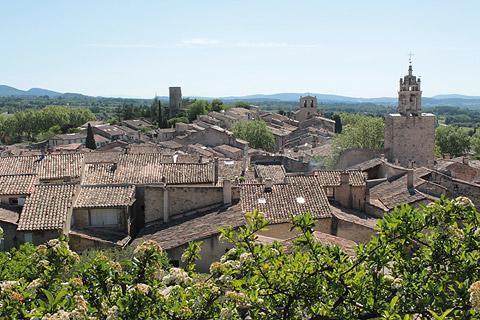 Cucuron is a small village between Lourmarin and Ansouis in the southern part of the Luberon regional natural park, to the south-east of the Vaucluse department in Provence, France. A very attractive traditional fortified Provencal village, Cucuron is also surrounded by the exceptional scenery of the Luberon, and stands below the remains of a 14th century castle.

From the 15th century to the 17th century Cucuron was a busy town with 3000 inhabitants, but this ended with an outbreak of the black death in 1720 that killed more than 1000 villagers and caused irreperable damage to the economy of the town.

France This Way comment: quite different from the typical 'beautiful villages of Provence', we enjoyed exploring the historic monuments, the pretty town centre and the large pond and recommend you find time to visit Cucuron when in the southern Luberon.

Your visit to Cucuron will start by passing through one of the three substantial gateways through the fortifications by which the old town can be entered. These fortifications and the castle tower dominate the layout of the village: the centre of the village is between the donjon Saint-Michel to the west and the round Tour Sus Pous to the east. 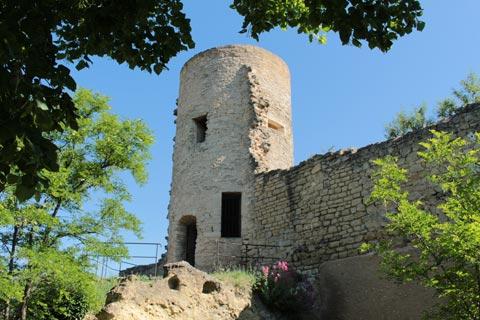 Although neither of the towers is outstanding as a monument, both of them are interesting to see and offer impressive views across the rooftops of the village and the surrounding countryside, so we suggest you start your visit at one and finish at the other, while exploring the village in between!

The donjon Saint-Michel is the castle keep from the 14th century castle around which Cucuron developed, and the Tour Sus Pous was part of the defensive walls that protected the village in the 16th century. At that time Cucuron had three different series of defensive ramparts, but the earlier walls have largely disappeared over the centuries.

On the Montee du Chateau Vieux just below the Tour Sus-Pous you can see the remains of an ancient glacière, a stone building that is partly underground and was used to store ice in medieval times. In truth it looks rather like any other derelict building  - we had passed it once without noticing it - but it is interesting to know the story!

The centre of the village is in Place Maurice Taron, about halfway between the two towers, and the surrounding streets. As well as the typical village houses you will notice some are particularly interesting such as the Hotel Bérard de Roure on Rue de la Mairie, the Maison des Consuls on Rue de l'Eglise with its statue of the Virgin and child in a niche and the Maison de la Reine Jeanne also with a statue and situates around the gateway just west of the Donjon Saint-Michel.

Other highlights of note in Cucuron include the decorative clock tower topped by an ornate bell housing, the 13th century Church of Notre-Dame-de-Beaulieu and a couple of small chapels. There is also an oil mill dating back to the 16th century and you will notice several traditional stone fountains and washhouses as you stroll through the village streets exploring the center of Cucuron.

Just outside the northern side of the village fortifications in Place de l'Etang you can see a man-made pond (built in the 19th century to replace an earlier natural pond) surrounded by shady trees and cafes. This is often the liveliest place in Cucuron, and the colourful houses next to the pond are pretty. 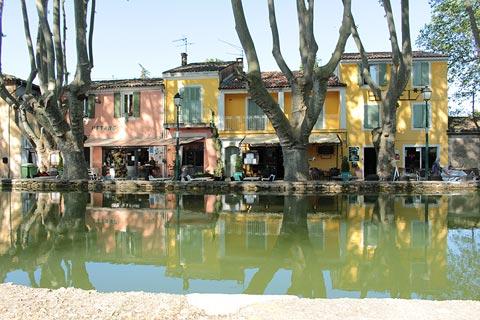 For a reminder that the location at Cucuron was occupied as far back as prehistoric times you can visit the Museum Marc-Deydier in the Hotel des Bouliers, an attractive 18th century townhouse in Cucuron, to see some of the local archaeological finds, including artefacts from both the roman and neolithic periods.

Head a little way north of the village to see the Chapel of l'Ermitage (also called the Chapel of Notre-Dame-de-Beauvoir), in a picturesque setting on the side of the hills. The village of Vaugines nearby has a chapel which will be familiar to lovers of the film 'Manon des Sources', the sequel to Jean de Florette.

Garden enthusiasts will want to visit the gardens of the Pavillon de Galon, a contemporary interpretation of classical French gardens that is listed as a 'remarkable garden' in France and features some very interesting planting structures and combinations.

The whole area is a delight to visit, with the Provencal scenery providing a magnificent backdrop to the ancient villages such as Lourmarin, Lacoste and Bonnieux, among others very close to Cucuron.

Map of Cucuron and places nearby

Visit near Cucuron with France This Way reviews

Plan your visit to Cucuron, Vaucluse

The French version of this page is at Cucuron (Francais)