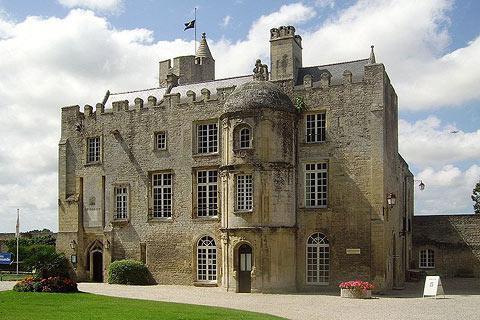 The village of Creully is to the north-east of the Calvados department of Normandy, between Caen and Bayeux.

Although it is best known for Creully Castle, the town itself has a couple of buildings of interest and merits a visit. The most important monuments include the 12th century Church of Saint Martin (although later modified) in the  romanesque style, and the historic 'halls' - buildings with stone arcades on the first floor dating as far back as the 13th-17th centuries (now incorporated in hotels and shops).

You can also see a 17th century mill building below the castle ramparts, and the 18th century building that once housed the gendarmerie. 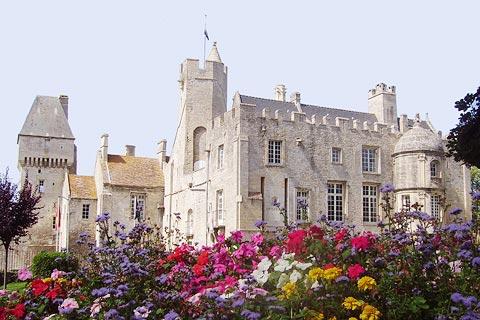 In the centre of Creully village, the castle was originally built in the 11th century as a grand manor house, and it was later during the 14th century and the Hundred Years War that the building was fortified to become a defensive castle - at various times during the war it was held by both the English and the French, and each added further modifications and defences, including the two towers.

After the end of the Hundred Years War the castle was in part demolished, then rebuilt in the second half of the 15th century* - from which time on it had a more peaceful existence, and certain defences were removed eg the ditch around the outside of the castle, while enhancements were made to make it more comfortable for living in.

* It is said that Louis XI was jealous of the owners, and in 1461 ordered that the castle should be demolished. 10 years later when the same king received a warm reception here he gave them permission to rebuild the castle. Difficult times!

As a result of these centuries of activity and change Creully castle today features architecture from a variety of epochs: for example the square tower is from the 14th century and had a military purpose, and the large windows and round tower in the main facade are renaissance style additions from the 17th century.

The castle also contains a small 'radio Museum' dedicated to the fact that the BBC established their first radio station in France after the D-day landings in the tower of Creully castle. 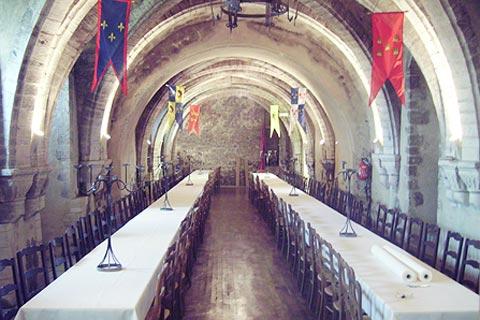 Chateau de Creully is now used for various events such as conferences and weddings. The castle is open to visitors, 6 euros entrance, but only in July and August, on tuesdays to Fridays, from 10.30-12.30 and 14.30-17.30 (and also on French Journées de Patrimoine).

Map of Creully and places nearby

Visit near Creully with France This Way reviews

Plan your visit to Creully, Calvados

The French version of this page is at Creully (Francais)