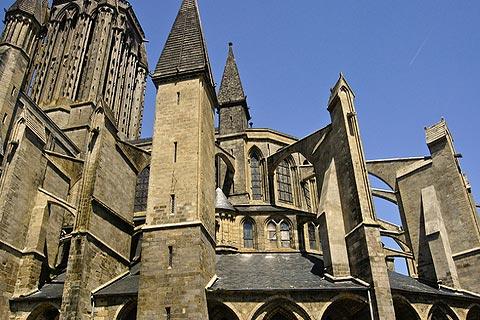 Coutances is found in the Manche department of Normandy, to the south of the Cotentin peninsula, 45 kilometres north of Mont-Saint-Michel and 65 kilometres south of Cherbourg.

The town suffered severe damage during the Second World War, but has recovered remarkably well and is an interesting town to explore. While the cathedral is the principal attraction in Coutances allow time to discover the other attractions.

There is one principal attraction, that has dominated the town for more than 1000 years - the Cathedral of Notre Dame. Towering above both Coutances town and the surrounding countryside, the original cathedral was built in the 11th century in the roman style - although the current cathedral is predominantly a 13th century rebuild in the gothic style. 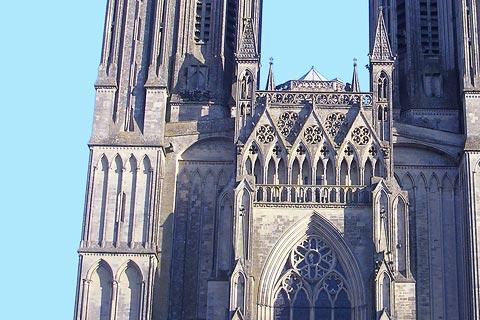 In design, the cathedral has a elaborately decorated facade with two substantial towers to the front, a separate lantern tower above the transept, and the sides of the cathedral feature extensive buttresses - typical of the gothic style, these buttresses are structural elements that allowed the walls to be much higher than in earlier churches, and also enabled the side walls to include windows.

Inside Coutances Cathedral the highlight is the view into the inside of the lantern tower, with a dome above the octagonal structure that features 16 decorative stone arches. There are also some notable stained glass windows, dating from as early as the 13th century.

If possible visit the cathedral during summer evenings when a sound and light show makes the most of this dramatic building.

There are various other sights of interest in the town that you will discover during your explorations of Coutances including two important churches: the Church of Saint Peter (14th century) and the Church of Saint Nicholas. The church of Saint-Nicholas is a simple roman style church now used for exhibitions that provides an interesting contrast to the grandeur of the cathedral.

You will also enjoy a stroll in the streets around the Hotel-Dieu (ancient hospital) which include the 17th century brick cloisters of the augustines. If you visit during spring or summer be sure to visit the public botanical gardens next to the cathedral in Coutances. These date back to the 17th century and each year numerous flower beds are planted in the gardens, as well as being nicely lit in the evening.

The Museum Quesnel-Morinière is a museum in an attractive 18th century building, and features many paintings and objects of art, mostly 'realist' type paintings from the 17th - 19th centuries. 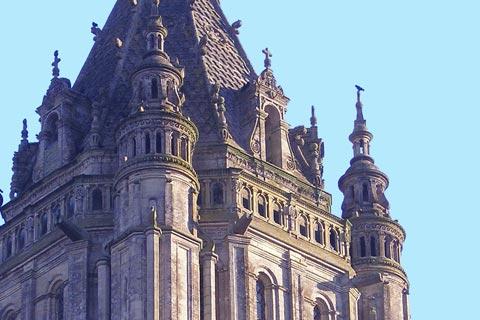 Another religious monument of interest nearby is Hambye Abbey, about 20 kilometres south-east of Coutances. As well as the abbey church, there is an ensemble of monastic buildings in an attrctive countryside setting. To the north-west you will also enjoy a visit to Lessay Abbey, an imposing abbey built in the 11th century.

There are various small towns and villages along the coast to the west of Coutances, including Donville-les-Bains and the popular resort at Granville to the south-west towards Mont-Saint-Michel and Blainville-sur-Mer, Gouville and Agon-Coutainville to the west of here.

Map of Coutances and places nearby

Visit near Coutances with France This Way reviews

Coutances is classified as a listed town of Art and History

Plan your visit to Coutances, Manche

Regular market(s) are held in Coutances each Thursday & Saturday. (Markets are held in the morning unless stated.)

The French version of this page is at Coutances (Francais)