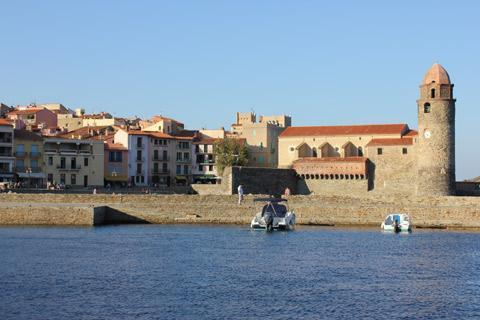 Collioure is a seaside resort on the Languedoc coast, just north of the border with Spain and on the 'Vermeille Coast'. Collioure has been a trading port since 673 and the village began to develop more fully in the 10th century.

Between 1276 and 1344 it was a summer residence for the court of Majorca. Later in the 13th century it was visited by crusaders ranging from the Knights Templars to the Dominicans. Though Collioure spent some time as a Spanish town it was French in the mid 17th century and at this time Vauban added to the defenses of Colliure. Collioure began to attract the artistic community including such renowned artists as Matisse and Derain in the early 20th century.

France This Way comment: Collioure is certainly the most attractive town on this stretch of the Mediterranean coast and is definitely not to be missed. It also feels slightly out of place: you feel as if you are in the heart of Provence rather than close to the Spanish border! 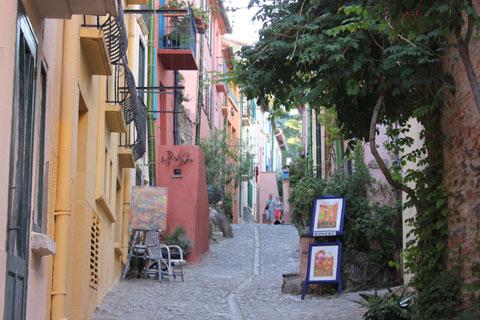 Collioure is now a popular destination with tourists and has a lively town centre with some interesting historical monuments and a popular local beach. With the castle and church creating an impressive backdrop, the beach and harbour are among the most scenic in Languedoc-Roussillon.

Start your visit by walking along the sea-front: there are the wonderful sights of the castle and the church of Notre Dame des Anges to admire and as you wander along the Boulevard du Boramar between the two there are lots of lovely seaside bars and restaurants to tempt you.

Head uphill into the historic centre of the town and the narrow streets are charming, the houses are painted in lovely pastel shades with painted shutters and many are bedecked with trailing bougainvillea and vibrant blue plumbagos.

Out of season the market days are particularly nice days to visit the town: these are on Wednesday and Saturday mornings. But it is useful to remember that in peak season it is always difficult to find a parking space in Collioure ... and even harder on market days!

The Church of Notre-Dame-des-Anges stands on a small peninsula in the sea. The belltower of the church was the town lighthouse in medieval times, with a church then built next to it in the 17th century.

Later, when the harbour was no longer used as a port, the lighthouse was incorporated as the church belltower. The domed cupola (in an Italian style) was added early in the 19th century. The interior of the church has a huge carved wooden altarpiece covered in gold leaf.

The Royal Castle of Collioure, Le Chateau Royal, dominates the seafront at the southern end of the harbour. The site has had a castle since as early as the 7th century, but the building we see today was constructed in the 13th century, with additions until the 17th century.

Once occupied by the templars, the castle then became a royal household for the Kings of Majorca (Collioure was not yet part of France at this time) before being transformed into an important Spanish border fortress at the end of the 15th century.

In the 17th century the French military engineer Vauban added further substantial fortifications, resulting in the castle that we see today. These extensive works required a substantial increase in space, and much of the original medieval town of Collioure was destroyed in 1671 to make way for the expanded castle. 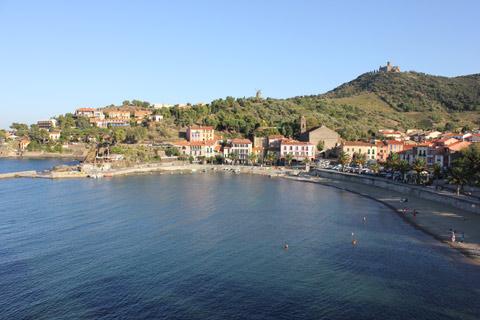 Le Moré is the old fishing village and the narrow cobbled streets and pretty pastel-painted houses are a pleasure to explore.

Above the town is Fort Miradou, built in the 15th century, destroyed and rebuilt by Vauban. It is now occupied by the army and not open to the public. Further out of town facing the sea are these two fortresses built in the 18th century - Fort Carré and Fort Rond.

Le Couvent et le Cloitre des Dominicains is on the southern edge of town: the monastery was built in the 13th century. In recent years the cloister has had a chequered history. It became the home of a co-operative wine seller but was sold in an illegal art sale to the Atlantic town of Anglet. When this was discovered it was bought back in 1992 and rebuilt in the gardens of the Modern Art Mueum.

Another way to explore the town is to pick up a leaflet with the 'path of fauvism' which leads you around 20 sites in the village where Henri Matisse and André Derain painted whilst staying in Collioure. At each of these places there is a reproduction of the painting so that you can compare the painting with the scene in the painting.

Matisse and Derain were not the only painters to spend time in Collioure: Picasso, Dufy, Marquet and many others also painted here and Collioure remains an artists town with around thirty different artists currently living and painting in the town.

The Museum of Modern Art (Musée Peské) in Collioure contains many modern and contemporary works including works by Cocteau, Descossy and  Pignon. The museum is on the Route de Port Vendres and charges only a small sum for entry.

Fans of Patrick O'Brien's sea-faring novels will be interested to know that he wrote almost all of his books whilst living in Collioure. He lived here from 1949 untill his death in 2000 (apart from a couple of winters in Dublin where he died) and is buried in Collioure.

Anchovies have been a one of Collioure's key industries for centuries. Because of the importance of anchovies in the local commerce and the local cuisine Collioure has been awarded the 'site remarquable du gout', or' award of culinary excellence'. The anchovies are prepared in lots of different ways and you can sample them in various different shops in Collioure.

After exploring the town return you can to the seafront to try one of the seafood restaurants along the waterfront in Collioure - their anchovies are especially recommended. 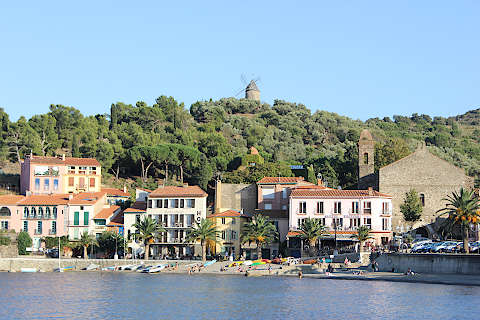 To visit near Collioure

A popular local site is the 13th century Madeloc Tower that stands at an altitude of 650 metres on the hill directly behind Collioure, and has lovely views down across the town and coastline. There are several other forts along the headlands around the town that are also of interest, such as Fort Saint Elme to the south and the Massane Tower and Fort Carré towards the north.

The oldest windmill in the region, built in the 14th century and recently fully restored, is the Moulin de la Cortina a little to the south of Collioure. This has been transformed into a mill for making oil.

The Ermitage de Notre Dame de Consolation is a pleasant four kilometres walk from Collioure. The chapel dates from the 15th century.

Further inland the vineyards and mountains of the region offer innumerable activities and scenic highlights. See also more of the popular resorts and beaches in Languedoc.

Map of Collioure and places nearby

Visit near Collioure with France This Way reviews

Plan your visit to Collioure, Pyrenees-Orientales

Regular market(s) are held in Collioure each Wednesday & Sunday. (Markets are held in the morning unless stated.)

The French version of this page is at Collioure (Francais)