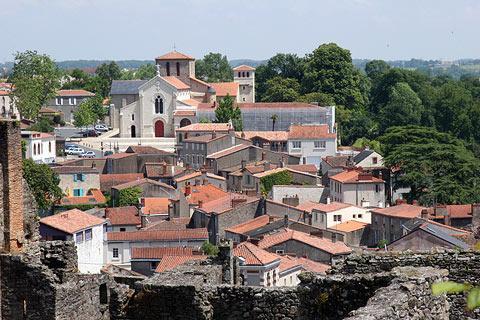 The small town of Clisson is in the Loire-Atlantique department of western France, about 25 kilometres to the south-east of the department capital, Nantes and on the banks of the river Sèvre and the river Moine which converge in the town.

Unusually for this region of France, Clisson is well known for the amount of architecture that is in a style more usually found in the Tuscany region of Italy. This is a result of extensive rebuilding in the style after the end of the War of Vendee towards the end of the 18th century.

France This Way comment: although the town is not in one of the most visited regions of France, Clisson is certainly worth a visit when you are in the vicinity. It is a pleasant town to explore, with several sites and places of interest including the Chateau de Clisson and various other historic monuments as well as the general pleasure of admiring the riverside setting and bridges, strolling along the narrow streets and enjoying the ambiance of this pleasant town.

Start your visit with a walk along the riverside: from here you have nice views that include the castle and main church and help you get your bearings in Clisson.

The arched bridge across the Sèvre river just below the castle and called the Pont de la Vallée was built from granite in the 18th century to replace an earlier bridge that had collapsed. Another interesting bridge crosses the river Moine in Clisson - the pont Saint-Antoine is a stone bridge built in the 15th century. The monumental stone viaduct across the Moine river was built in the 19th century.

The Chateau de Clisson dominates the town centre from a raised position above the Sèvre river. The castle dates from the 13th to 15th centuries and although significant parts of the castle are in ruins there remains an impressive amount of the medieval castle still to be seen and visited.

Originally quite a simple medieval fort built to protect the Duchy of Brittany, it was in the 15th century that the castle was transformed by Francois II into a more substantial fortress.

During the 16th and early 17th centuries the castle at Clisson was in part converted into a more comfortable residence, and further additions were made to the buildings. However by the end of the 17th century the castle had become abandoned and had started to become derelict.

The castle was further damaged during the time of the revolution and the War of Vendée and neglected from that time (the end of the 18th century), and it is only quite recently that efforts have started to preserve and restore the castle.

During a visit you can see part of the original donjon and gateway as well as a substantial part of the main living accommodation (the logis) and various of the towers and fortified walls. In all there is a lot to see, and many features of interest.

The other monument that dominates the skyline in Clisson is the Church of Notre-Dame. At first sight the church gives the appearance at first glance of being quite old, and the church that originally stood here was built in the 15th century, but the current church was only built at the second half of the 19th century.

Other religious monuments in Clisson include the modest Church of the Trinity, originally built as a benedictine priory; the Templars Chapel, built in the roman style in the 12th century and originally part of a group of buildings used by the templars; and the 12th century Church of Saint-Jacques.

Another notable structure in Clisson is the substantial market hall which has impressive exposed carpentry work. The hall has held the weekly market in Clisson each Friday since the 15th century and this is the best time of week to visit the town, if possible. 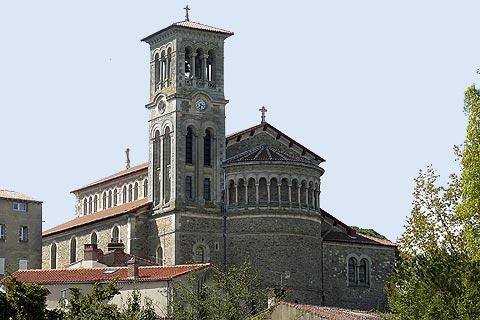 The famous muscadet wine is produced here as part of the Muscadet Sèvre-et-Maine region.

Clisson is known to fans of Heavy Metal music because of the annual music festival held here. Called Hellfest, the festival takes place for three days in the second half of June each year and features many of the most famous Metal rock bands.

The town of Nantes, one of the most important towns in France, is about 30 kilometres north-west of Clisson and a pleasure to explore.

Map of Clisson and places nearby

Visit near Clisson with France This Way reviews

Plan your visit to Clisson, Loire-Atlantique

Regular market(s) are held in Clisson each Friday. (Markets are held in the morning unless stated.)

The French version of this page is at Clisson (Francais)