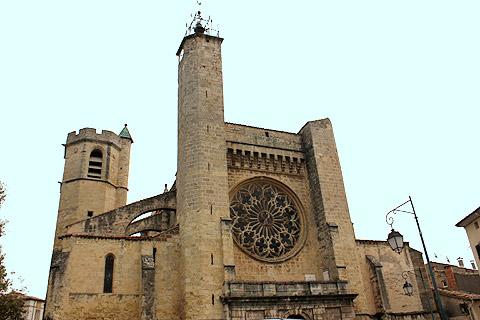 Clermont-l'Herault is 48km from the vibrant city of Montpellier and 40km from the sea. Although it is much smaller than Montpellier it is the capital of the Languedoc Roussillon region.

The centre of town is dominated by its large church. Saint Pauls church was begun in the 12th century and completed in the 14th. It is built in Gothic style and has a huge rose window in its front facade.

There is also a chapel, 'Les Penitents' which is built in southern Gothic style and is now home to a cultural centre for Clermont-l'Herault.

The town centre is pleasant rather than remarkable with a reasonable smattering of bars and restaurants. It is not really a tourist destination in itself but is a useful base for exploring the Cirque de Moureze and the Lac du Salagou nearby.

Above the town are the remains of the town's 12th century Feudal castle. It is one of the best preserved of its time in the Languedoc area. The Guilhem tower, a donjon, was also a key part of the town's defences as were the ramparts, parts of which still exist along with several fortified gateways.

The town's war memorial caused some controversy when it was errected. Its sculpture by Paul Dardé shows a soldier, dead from the war, with a nude female figure, thought to depict a cabaret dancer, watching over him. Some explain this as having a pacifist significance.

Eighty per cent of the olive oil production in the Herault department is produced in the mill at Clermont l'Herault. If you wish to learn a bit more about the production of olive oil so vital to the local economy you can visit the 'Maison de l'Olivier' on Avenue Wilson. You also get a chance to buy some of the delicious local olive oil.

The beautiful Cirque de Moureze with its strange and wonderful rock formations is just 8km to the west of Clermont l'Herault. Huge limestone dolomites are scattered throughout this lovely landscape.

Also nearby is the Lac du Salagou with its strange red soil around the edges of the 750 hectare lake. It even has a 'ghost' village - . abandoned as it was supposed to be flooded along with several other villages when the valley bottom was flooded, but this one, Celles, escaped the water.

Villeneuvette is a village which was built to house the workers of the factory creating sheets. (For Clermont l’Herault and the local area sheet making was a key industry.) Above the gateway as you enter the village is a huge sign announcing ‘Honneur au travail’ (Honour in Work)!

Map of Clermont-l'Herault and places nearby

Visit near Clermont-l'Herault with France This Way reviews

Plan your visit to Clermont-l'Herault, Herault

The French version of this page is at Clermont-l'Herault (Francais)