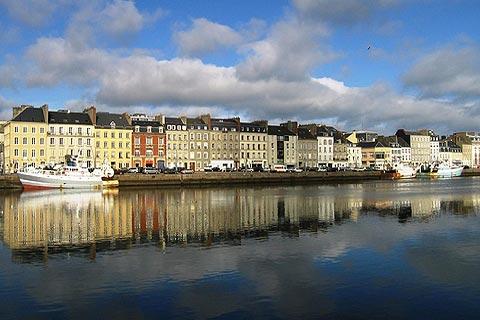 Cherbourg, at the northern tip of the Cotentin peninsula in the Manche department of Normandy, is best known as a port town and arrival point for cross-channel ferries from the UK. But don't overlook Cherbourg as a destination - the town itself also deserves investigation...

Cherbourg, a city of museums, castles and churches

Cherbourg is well known for its museums and religious monuments, but also has a port area to explore and several monuments in the historic centre. Start a visit here with a stroll along the port next to the imposing 18th century townhouses until you reach the Basilica of the Trinity.

France This Way comment: while it is true that Cherbourg is not a major tourist destination, it is worth a visit if you have some time to spare before your ferry departure...and the wide range of restaurants make it a good place to stop for lunch.

According to tradition the Basilica of the Holy Trinity was built by Saint Ereptiole in 435 and destroyed by the Normans in 841. It was rebuilt and reconstructed in various ways over the centuries but then largely destroyed during World War II. The church was rebuilt after the war, keeping the flamboyant gothic style.

The building is 46 meters long and 28 metres wide and has three naves with four large side chapels. The tower, built in the first half of the 19th century, is over 20 metres high. Inside the basilica you can see paintings such as "The Visit of the Holy Women at the tomb of Jesus" by Flemish painter Gaspard Crayer (1582-1669), and the “Adoration of the Shepherds” by Philippe de La Hire (1640-1718). 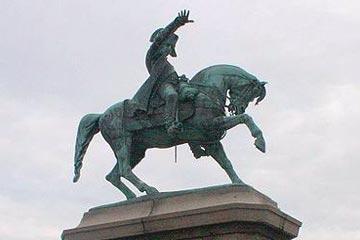 After the basilica you can head away from the port to explore the pedestrianised historic centre of Cherbourg which includes the market halls and some imposing stone buildings.

Your visit can continue at one of the most prestigious cultural institutions in the city, the Museum Thomas-Henry (1776-1836). The Museum was founded in 1831 by a donation of more than 160 paintings by Henry, commissioner of the Royal Museums, and today has a collection of 300 paintings by French, Italian and Dutch artists from the Middle Ages to the present.

It is a vast and beautiful church, of ogival shape, decorated with stained glass and mosaics, and the treasury of the Church has a ciborium and reliquaries, alabaster statues depicting the Virgin and St. Augustine (354-430); also many paintings by artists of the 19th century such as “The Empress Voeu de Mathilde” by M.me de Beaudrap.

In Cherbourg and nearby you can enjoy the typical cuisine of Normandy. You can taste various local dishes such as the roasted scallops and, in general, various dishes fish, such as mussels, fish soup and the famous "tartiflette au Camembert", and the “filet de porc aux pommes et au Calvados”. If you eat a bit too much, you may want to sip a bit of the famous Calvados, a liqueur made of apples and aged for two years in wooden casks.

Another building worthy of mention is the famous "Cité de la Mer" (City of the Sea), which is a vast tourist building started in 1928 and updated in recent years. Among the curiosities it includes the so-called “Ocean Pole”, with several very deep aquariums (more than 10 metres), and the “Submarine Pole”, where you can admire the “Redoutable”, a huge submarine very popular with visitors due to its war time associations.

To conclude with another visit to a museum in Cherbourg, visit the Fort of Roul, built under Napoleon III (1808-1873) on the Montagne du Roule to defend the harbour and the best place to enjoy views across the harbour and port of Cherbourg.

Today the fort is home to the Liberation Museum, which contains many memories of the World War II relating to the people of Cherbourg, with photographs and documents of the period, also accompanied by audiovisual material, which tell the occupation of the fort by the Germans and the Allied struggles for the liberation. 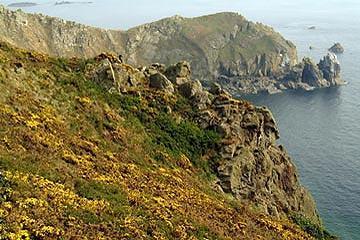 Places to visit near Cherbourg

In the surrounding region there are also charming places to visit such as Tourlaville Castle, very old and rebuilt under the reign of Henry IV by Jean II de Ravalet (1549-1625), with four large rooms and a large staircase with a magnificent flight of iron. On the outside, the towers of various shapes (octagonal and round) are particularly noteworthy.

Some of the most attractive scenery here can be seen on the coast of Cap Hague.

Another destination we suggest you visit is the village of Barfleur, on the Cotentin peninsula east of Cherbourg and listed among the most beautiful villages in France.

Map of Cherbourg and places nearby

Visit near Cherbourg with France This Way reviews

Cherbourg is classified as a village in bloom (ville fleurie) 4*

Plan your visit to Cherbourg, Manche

The French version of this page is at Cherbourg (Francais)