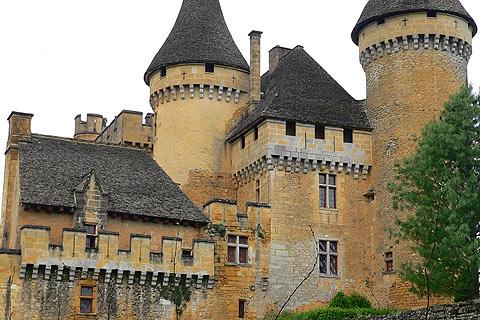 The Chateau de Puymartin is between Sarlat and Les Eyzies in the centre of the Perigord Noir region of the Dordogne department. Like many of the castles in the region, the chateau played its key role during the Hundred Years War, and then later in the Wars of Religion.

A village once stood around the castle but is no longer in existence.

The castle at Puymartin was originally built in the late 13th century, although significant reconstruction work took place in the 15th century after the Hundred Years war and a long period of abandon had left the castle in poor condition.

After changing hands several times across the centuries, firstly between the English and the French, and later between the Protestants of Sarlat and the Catholics, the castle was again left damaged by the trials of the wars of Religion.

Legend tells us that the ghost of a young lady dressed in white sometimes appears in the castle. She is the ghost of Thérèse de Saint-Clar, locked up in a small room in the castle for 15 years by her husband after he surprised her together with her lover (who was himself executed).

She was never to leave the room before her death, food being passed through a trapdoor in the ceiling until the end of her life.

The castle suffered its last great dispute in the 17th century  - as part of a family disagreement over inheritance, when Jean de Saint-Clar and his sister Suzanne spent a mere 40 years arguing over whose castle it was - Suzanne eventually took control.

By the 18th century the castle was again abandoned and falling into disrepair. The family of the current owners took control of the castle in the 19th century and once again started the long process of restoration - a process that also included quite substantial modifications to the appearance of Chateau du Puymartin.

The first thing that strikes you about the castle when you visit is the impressive location - although quite hidden in the Perigordian forest, Puymartin is situated on a steep hill with commanding views over the countryside.

Despite the many changes made to the castle over the centuries, you still feel that you are in the presence of a medieval castle, with its towers, strong defensive walls and a substantial main building, around a central courtyard.

Inside Puymartin, there are some lovely rooms and furnishings to be seen - above all the spiral staircase, a bedroom decorated with several fine Aubusson tapestries, and the meditation room with its paintings (in black and white) of scenes from mythology, and painted in the middle of the 17th century. The mythology theme is also continued in a large salon with large tapestries telling the story of Helen of Troy.

The castle is open for visits from April to November.

Map of Chateau de Puymartin and places nearby

Visit near Chateau de Puymartin with France This Way reviews