Saumur chateau sits on a raised rocky area above the Loire River and the town of Saumur in the Maine-et-Loire department (historically the Anjou region). Always an impressive sight, the château de Saumur is even more beautiful when lit up during the evening.

France This Way comment: some of the collections on display are rather specialised and there is less to see in Chateau de Saumur than most castles in the region, but if you are staying nearby and would like to see the beautiful views from the castle you will still enjoy a visit...and entrance does not cost as much as most castles!

In contrast to many castles of the Loire, Saumur castle does not have rooms furnished in period style but is rather a museum with a wide range of different items displayed in its rooms. The views cross the town and river from the castle are another major attraction of a visit. 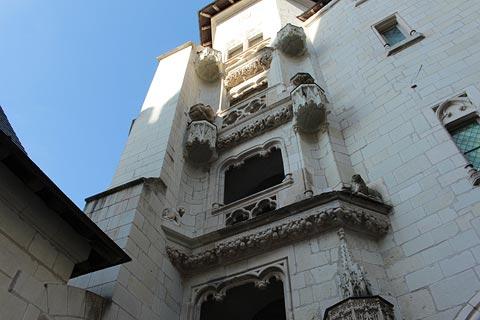 History of the Chateau de Saumur

The Château de Saumur was originally constructed as a fortified stronghold in 962 close to a benedictine abbey. The castle was rebuilt by the English King Kenry II in 1068 after the original fortress, along with the abbey, had burned down.

In the early 13th century Saumur returned to the hands of the French, under King Philippe II, and it was his son King Louis IX (Saint Louis) who was responsible for the castle's rebirth - among other major works he added defensive walls and four round towers around the castle.

A significant amount of fortifications were added around 1589 after the Protestant King Henri IV (of France and Navarre) gave the castle as a gift to Duplessis-Mornay, then just 32 years later the castle was converted into an army barracks.

Under the rule of Napoleon Bonaparte, from 1808 until 1814 the castle was used as a prison then for most of the remainder of the 19th century the Chateau de Saumur was used as a storage depot for weapons. Since that time the castle has been used as a museum, with an interruption from 2001-2008 after a major part of the ramparts collapsed.

Your visit starts in the main courtyard and includes several rooms on the ground floor and first floor. The courtyard originally had buildings on all sides but the west wing collapsed in the 17th century. Around the courtyard you can see the well that kept the Chateau de Saumur supplied with water for 600 years, an imposing renaissance style staircase and the room where justice was served.

An underground room is also accessed by a staircase from the courtyard, and is underneath the courtyard. This is a large room where provisions were kept cool.

The rooms on the 1st floor are more grand, in particular the rooms that were added and furnished by Louis I in the 14th century in the north wing. You can also see the oratory, the King's bedroom and other bedrooms as well as enjoying the lovely views across Saumur from the gardens.

The belvedere with its views across the town and Loire river is also reached from a doorway at this level, although this part of the castle is only accessible with a guide and a supplement of three euros is charged (usual entrance costs around seven euros).

The chateau also contains a museum with collections of furniture, porcelain and tapestries among the most important, on display on the first floor in the castle, as well as a substantial collection of items related to equestrian activities on display in the ancient abbatiale. The museum has been established in the castle since 1912, when the collection became too large for the room in the Town Hall where it was previously exhibited. 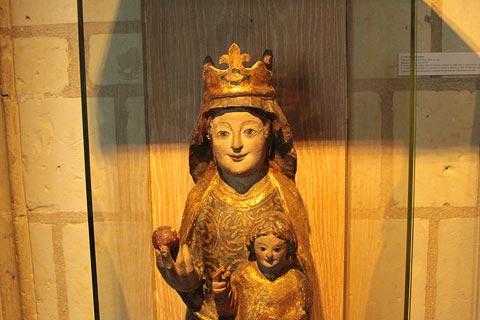 Closed from early November to end March, except school holidays

As well as the castle there are several other sites of interest in the town: see the Saumur guide for details or discover more Loire Valley castles.

Other places of interest in the vicinity include the villages of Candes-Saint-Martin and Montsoreau on the Loire river to the east of Saumur, and the Abbey of Fontevraud.

See more castles in France. You can find more travel ideas in the Maine-et-Loire guide and the Pays de la Loire guide.

Map of Chateau de Saumur and places nearby

Visit near Chateau de Saumur with France This Way reviews