The Chateau du Lude, next to the Loir and near Le Maine, La Touraine and l'Anjou, is the first of the Loire's chateaux that you reach when arriving from the north - it is a historic seat and also a living, family country-house. Built as a strategic place to defend Anjou, Barbe Bleue regained the Chateau du Lude in a triumphant fight against the English during the Hundred Years War.

France This Way comment: the Chateau du Lude is impressive with it's architectural ornaments and styles, and the extensive gardens, and the chateau is a real testimony to six centuries of French architecture.

Since the 10th century, this fortress has been protected and made more and more beautiful by its owners, and has been in the hands of the same family for the last 250 years. Nowadays, this chateau is still inhabited, animated and protected by the De Nicolay's family.

Since the Daillon family were associates of François 1st as well as the Italian and French Renaissance, this vast residence has adapted to its time and saw visits by Henri IV and Louis XIII. The original medieval fortress, built to defend Anjou, has been added to over the centuries and now each facade is an example of a different era of French architecture.

In 1457 Jehan de Daillon, chamberlain to Louis XI aquired the castle and his descendents employed Italian artists to convert the fortress into a residence. Defensive slit-windows were opened up into sculpted, mullioned windows letting in lots of light.

Although the Daillon dynasty came to an end in 1685, the castle survived and was fully restored at the end of the 17th century by its owner, Joseph Julien Duvalaer, a member of the East India Company. He left the property to his niece the Marquise de la Vieuville, who built the West Wing which is a lovely example of Classical French architecture.

It was at the end of the Classical period (as you can see in the eastern wing towards the Loir), and the disappearance of the Marquise de Vieuville, that the castle entered, by succession, into ownership by the family of Talhouët, who made transformations in the 19th century.

Inside the château there are some very lavishly decorated rooms and there is a ‘Cabinet of Paintings’, which is an Italian-style studiolo (a type of painted room) which is the only one in a French château and is very interesting to see. The old vaulted kitchens in the basement are also very impressive.

The landscaping of the park and gardens began in the 17th century, when the old fortress gave way to the large terrace lined with a long and elegant balustrade, opening the view to the countryside and overlooking the Loir.

The low gardens that once held the vegetable gardens slowly followed the evolution of the fashion of the gardens, giving way to large romantic French gardens, of which the most notable are due to the landscape gardener Edouard André at the end of the 19th century. It contains flower beds and ponds, completed by large roses and shrubs with scented flowers against the wall. This very orderly look contrasts with the opposite bank, converted into an "agricultural park" with majestic perspectives.

The park was planted in English, purple beech offering a beautiful perspective to the castle. The garden of the spring, on the edge of the park, characterizes the development of a romantic garden in the 19th century. In a rock decoration, the spring is buried under a grotto surrounded by a setting of perennials and bushes with winter and spring blooms.

Finally, the Garden of the Spur was created with the Louis XVI wing in the 18th century. It was redesigned in 1997. The walls of the old fortifications are highlighted by hedges of yew trees. They house a rose garden dedicated mainly to Chinese roses, while a labyrinth of boxwood occupies the triangle of the former defensive spur. Recent developments have been undertaken in the park, such as the botanical walk created under the direction of botanist Jacky Pousse.

A large vegetable garden is spread over three levels, where collections of flowers, fruits and vegetables surround the greenhouses and the orangery. A private part of the garden, the vegetable garden is however open one weekend per month and on request. Its production is intended for family consumption, but also for the preparation of jams prepared in the old vaulted kitchens of the 15th century.

Just like the kitchens, the stables, the underground areas as well as the wheat attic with its wooden framework constitute very evocative places of the life of another time. 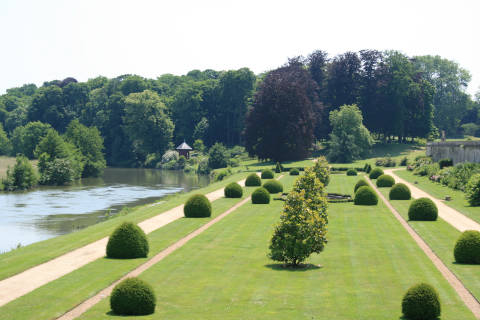 Le Lude is a fine example of French architecture. From the Middle Ages to the 18th century, different styles can be seen in its construction, and in the salons, kitchens and outbuildings.

Chateau du Lude is surrounded by lovely gardens, and you’re invited to stroll through the French-style gardens and discover the rose garden, the “parc romantique”, and the vegetable garden (the vegetable garden is only open on special days and by request for groups).

Open from the 1st of april to the 30th of september

See more castles in France. You can find more travel ideas in the Sarthe guide and the Pays de la Loire guide.

Map of Chateau du Lude and places nearby

Visit near Chateau du Lude with France This Way reviews