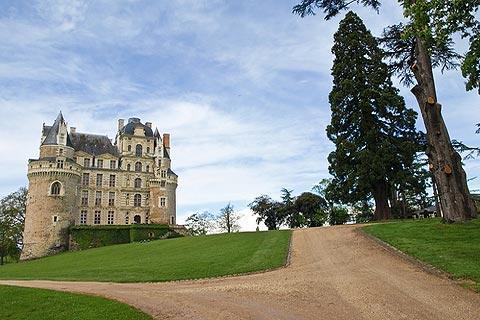 Chateau Brissac is situated a few kilometres south-east of Angers in the Maine-et-Loire department, in the Loire Valley of France.

The Chateau de Brissac is an imposing castle, with the towers from the original medieval building standing either side of a facade decorated in the renaissance and baroque styles. The grandeur of the castle is enhanced further by the large stone pedestal on which it stands.

Although a castle has stood here since the 11th century, the current construction dates from the rebuilding of Brissac castle in the 15th century by one of the ministers to King Charles VII. The castle then remained in the hands of noble families for the next 100 years.

During the Wars of Religion that ravaged much of France in the latter part of the 16th century Brissac castle was severely damaged during a siege by King Henry IV, only being saved from total demolition when King Henry gave the castle to Charles II of Cossé - along with the necessary funds to rebuild it.

Seized from the family during the revolution, the castle suffered substantial damage and was left abandoned for about 50 years. However, by the middle of the 19th century the castle, now back in the hands of the same family, started undergoing extensive renovations. The work continued, and now 150 years later, the family have opened Chateau de Brissac to the public (guided tours only).

The first thing that attracts your attention when you visit is the sheer height of the castle - at seven stories high Brissac is the tallest castle in France.

The architectural style of the castle facade reflects the renaissance and baroque architecture that was used during the reconstruction, as clearly seen in the decorative stonework of the front of the castle. The round towers incorporated in the building are part of the earlier medieval castle at the same location.

Brissac castle has more than 200 rooms and your visit includes some very impressively furnished rooms such as the Grand Gallery with its ornate ceiling and Aubusson tapestries, the dining room, and bedrooms containing authentic period furnishings. It also includes wine tasting of wines produced on the family vineyard.

Outside, the castle is surrounded by extensive parklands that can also be explored during your visit. In the grounds you can see the mausoleum where the Dukes of Brissac were buried.

Open April to October, admission price was 9 euros when we visited.

To stay in the Chateau during your visit please see Chateau de Brissac: bookings.

The castle is a popular location for local events such as hot air balloons and motor car meetings, for events in the castle such as weddings and parties in the splendour of the historic rooms, and as an upmarket chambre d'hote. Chateau de Brissac is also well known as being home to the Val de Loire festival, in a theatre created in the castle in the 19th century.

The town of Angers is a short distance north of here and is very rewardng to visit: in particular we enjoyed visiting the castle in Angers to see the Apocalypse Tapestry.

See more castles in France. You can find more travel ideas in the Maine-et-Loire guide and the Pays de la Loire guide.

Map of Chateau de Brissac and places nearby

Visit near Chateau de Brissac with France This Way reviews