Château de Commarque is located 15 kilometres north of Sarlat and close to Les Eyzies, in the centre of the Dordogne department. It sits on a rocky outcrop in the quiet valley of the Beune river, a tributary of the Vézère river and part of the same UNESCO protected region.

Something of an an enigma among castles in the Dordogne department, the Chateau de Commarque is less renovated than most of the castles in the region: most of the important castles here were transformed into more comfortable accommodation in the 16th and 17th centuries, and have been renovated and maintained since that time.

Meanwhile the Chateau de Commarque was abandoned and lost in the forest, and is situated in a quiet and long abandoned valley where the silt, debris and neglect of the centuries virtually swallowed the castle, and it is only in recent years that it has been 'rediscovered'...

As a result Commarque is a good chance to see how the castle and surrounding buildings were in the 15th century - although most of the buildings here are in ruins, they are substantial enough to easily understand the original layout of the site - and to have plenty to look at! 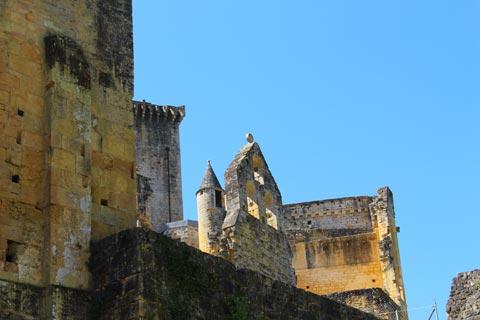 History of the chateau de Commarque

As you approach the castle you can see various prehistoric shelters and tunnels carved into the rock, and other traces of troglodyte settlement, providing evidence that this place has been inhabited for a very long time.You will notice that in several places you can se the roof line of the troglodtye houses, now at ground level. This is because several metres of silt has been deposited over the centuries, so most of the troglodyte buildings are concealed underground.

The lower parts of the chateau at Commarque are also hewn into the rock on which it sits: the main castle dates in part from the 12th century, at which time it was the base for the abbots from Sarlat. This first castle was built of wood - hence there is no trace remaining today - and protected important trade routes that passed through the valley.

The castle later got sold to the Beynac family and during the 13th and 14th centuries the castle was rebuilt in stone and expanded in size. Around the main building several other defensive towers and logis were built by other local noble families such as the Commarques, the Gondrix and the Cendrieux.

The fortunes changed for chateau de Commarque during the Wars of Religion and eventually it fell into a state of abandon, and the tales of the templars and local piracy in the castle passed into local legend. The Chateau de Commarque itself was little known in the region and its inaccessible location in a tree lined valley led to it slowly becoming buried in silt and dirt over the centuries.

Towards the end of the 20th century the Commarque family re-bought the castle, and the slow process of uncovering its mysteries started to take place: under the watchful guardianship of Hubert de Commarque, the owner for the last 50 years, the undergrowth and two-three metres of soil that covered the castle have been removed and the castle revealed once more.

It is a fascinating place that has been exposed; the main tower of the Chateau de Commarque forms the highlight and is surrounded by other 15th century buildings. Within the castle there are sufficient remains to understand the layout of the original structure, with the large donjon (tower) and the building that contained the main living quarters still structurally intact, and the walls of several of the other buildings still standing.

Note that the emphasis throughout the renovation work has been on preserving the buildings as they now are, rather than to rebuild them in the original style. As a result, very few buildings have roofs - although the chapel has a lovely stone roof - and many walls are missing.

The buildings around the main tower are interesting and you can see the ruins of several houses, a bread oven and a small chapel. Inside the tower there are various rooms with large fireplaces and an impressive spiral staircase that leads to the top of the tower, with a small viewing platform from where you have lovely views across the surrounding countryside.

Below the main tower there is a large area of troglodyte rooms carved into the rock which have been furnished with typical items and give an insight into what it must have been like to live in these caves - more comfortable than you might think! You can also walk around the outside of the castle in the parkland to get nice views of the castle and to see further evidence of troglodyte settlements. 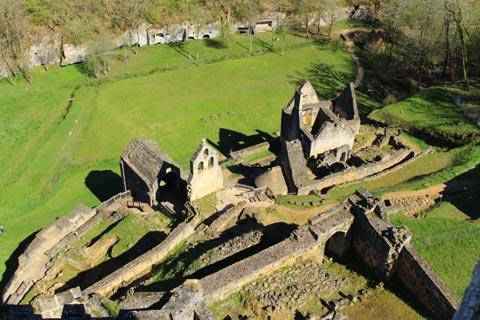 The parking is about 600 metres from the castle, to help preserve the quiet environment: it is a very pleasant walk through the woods to reach the castle, and parking for disabled is available much closer if needed.

Note: the castle you can see across the valley from Commarque is the Chateau de Laussel, a castle in private ownership and closed to the public.

There are many Dordogne castles and other prehistoric sites in this part of the Dordogne department including the caves at Font de Gaume and the prehistoric site at La Roque-Saint-Christophe as well as others in the Vezere valley around Les Eyzies. Close to the Chateau de Commarque At the Cabanes du Breuil you can see a recreation of an ancient village.

Map of Chateau de Commarque and places nearby

Visit near Chateau de Commarque with France This Way reviews