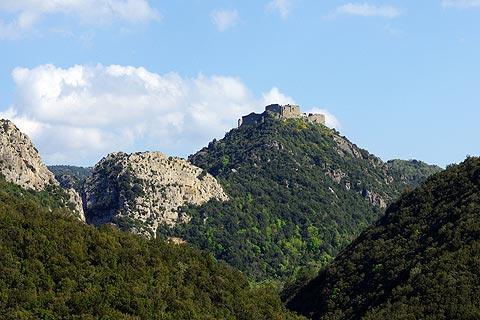 The Château de Termes is one of the famous 'cathar castles' of southern France, situated near Termes village in the Aude department of the Languedoc-Roussillon region. The castle, now in ruins, circles the top of a hill and dates from around the 12th century.

History of the Château de Termes

Until 1210 the Château de Termes was owned by the local lord, Raymond de Termes. Raymond sided with the cathars and as a result the castle was besieged as part of the crusade against the cathars in 1210. After a long siege that lasted several months the water in the castle was running out and sickness was rife.

Those in the castle tried to escape one night but were captured and most were killed. The castle fell into Royal ownership in 1228. Raymond de Termes himself survived and even managed to regain control of the castle for a while after the death of Simon de Montfort but the castle soon fell back in the hands of the King and Raymond was taken to prison in Carcassonne.

The cathar battle was not yet over for the de Termes family: see the Château d'Aguilar for details of the life and castle of Olivier de Termes, Raymond's son.

The Château de Termes continued to have a military function because it was on the border with Spain. It was reinforced and fortified during the 13th century and played a defensive role until almost the time of the signing of the Treaty of the Pyrenees in 1659, at which time the border with Spain moved south and the threat of attack disappeared.

The poor state of Termes Castle today is in large part due to a deliberate decision to destroy it, after it became established in the middle of the 17th century as a base for a band of brigands to terrorise the region, and a local stonemason was paid to use gunpowder to destroy the castle.

The castle is a short walk from the village of Termes, on a hilltop at an altitude of 470 metres. Despite the efforts to demolish the Château de Termes there is a significant amount of the original walls still to be seen and local conservation groups have also made substantial efforts in recent years to preserve and make the most of the castle for visitors.

There are also lovely views from the castle which extend far across the surrounding hills.

The Château de Termes is open every day from April to October, and weekends, bank holidays and school holidays in March and November. Entrance costs 4 euros for an adult and 2 euros for a child up to 15 years old.

Termes itself is also a pleasant village to explore while the Gorges de Termenet are an impressive natural scenic highlight here. To the north, the village of Lagrasse is one of our favourites in the region.

You can also discover more of the best known French cathar castles while you are in the region: the Chateau de Peyrepertuse and the Chateau de Queribus are the most visited and just a short distance south of the Chateau de Termes.

Map of Chateau de Termes and places nearby

Visit near Chateau de Termes with France This Way reviews