The Chateau de Harcourt is a castle with medieval origins, in the village of Harcourt and about halfway between Lisieux and Evreux.

Note: there are at least four castles in France that share the same name, in the departments of Calvados, Eure, Vienne and Vosges. Here we are visiting the Chateau d'Harcourt in the centre-north of the Eure department.

France This Way comment: the combination of the castle at Harcourt and the surrounding arboretum and park together provide a very pleasant excursion 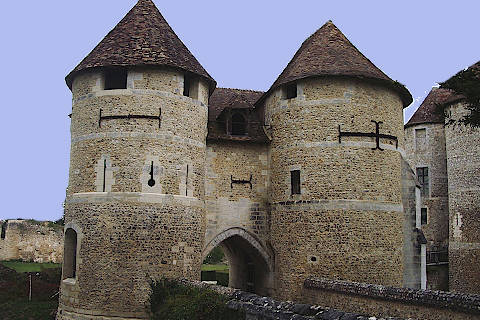 History of the Chateau d'Harcourt

The Chateau de Harcourt has its origins in the 12th century, and quite unusually for castles in this region it has retained a great deal of its original structure and layout. A chateau has stood here since the 11th century, but the original castle, built of wood, was entirely replaced by the stone structure.

The castle had a stone tower, built on a raised area of earth and surrounded by a ditch. This was extended in the 13th century, with the building of a five-sided castle at Harcourt with five towers and the addition of a fortified wall around the castle which had 12 towers: clearly it was altogether a much more fortified building than the earlier castle.

The Hundred Years War in the 15th century saw the Chateau de Harcourt pass 30 years under the control of the English, which ended in 1449 when they were driven from the castle by the local lords. During the 16th century the castle played an important role in the Wars of Religion, and was also severely damaged during these wars. In the following century the castle was largely abandoned, having lost all military use.

At the end of the 17th century the castle was bought and renovated to provide comfortable living accommodation surrounded by gardens. This work involved substantial changes to the building: three of the five sides of the castle were removed, and large windows added, so that sufficient light entered the building. The upper part of the donjon was also removed, and the interior underwent a substantal transformation, including the addition of a monumental staircase.

The building through which the castle is entered, called the châtelet, also underwent substantial changes and the two round towers that dominate the building were not added until the 18th century, although the rectangular building that forms part of the chatelet dates from the 13th - 15th centuries. As with the castle, the chatelet was transformed in the 17th century, for example with the addition of the roof.

Visiting the Harcourt castle today, you can still see a substantial part of the defensive walls, the courtyard (basse-cour), the châtelet and the main castle. The castle is largely unfurnished, but you can appreciate the different styles of the medieval parts with their sone walls and the renovated rooms with, for example, wood panelling and parquet floors.

The arboretum at Harcourt, next to the castle and entered as part of the same visit, is a large park that covers almost 11 hectares (25 acres) and includes about 500 different species of trees and bushes. There is a further 90 hectares of forest adjacent to the arboretum.

The arboretum is one of the oldest in France, having been created at the beginning of the 19th century, very pleasant to explore, and the highlight of a visit for most visitors to the Domaine d'Harcourt: the visit to the castle does not take very long, but you will want to spend at least an hour or two exploring the park and arboretum.

Various activities are also organised by the Chateau d'Harcourt, including an Escape Room in the castle, a 'treasure hunt' for children and occasional medieval re-enactments in the grounds. 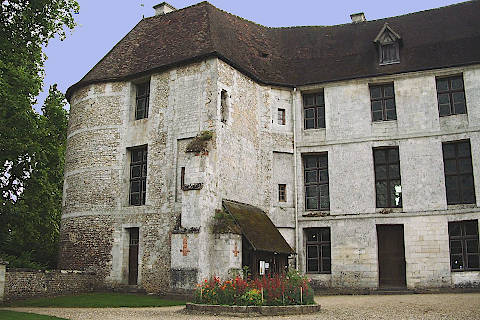 The lovely photo of the drawbridge and castle entrance at the top of this page is by Jacky Delville and subject to copyright.

In the centre of Harcourt village you can see the pretty church of Saint-Ouen, next to a very charming medieval building in colombage, that was once the market hall and since the middle of the 19th century has been used as the town hall for the village.

Not far from Harcourt you can visit the pretty village of Le Bec-Hellouin, classified as one of the "most beautiful villages in France".

See more castles in France. You can find more travel ideas in the Eure guide and the Normandy guide.

Map of Chateau de Harcourt and places nearby

Visit near Chateau de Harcourt with France This Way reviews