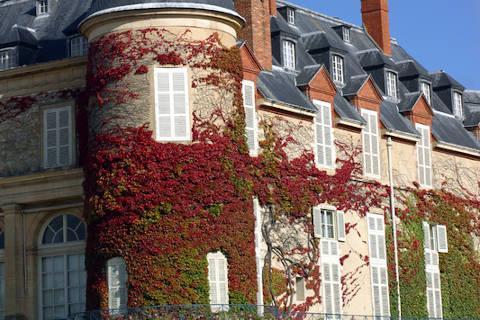 The Chateau de Rambouillet is an important castle surrounded by the Forest of Yvelines and situated in the Yvelines department (region Île-de-France) about 50 kilometres south-west of Paris.

Both the castle itself and the dairy are listed as National Monuments of France.

France This Way comment: unusually among the historical castles of France, Rambouillet plays a role as important now as it did in the past - it is now the summer residence for French presidents, and frequent host to heads of state from other countries.

Dating from the 14th century, the Chateau de Rambouillet was originally a 'simple' manor house. It was converted to a castle with the addition of a moat and fortifictions in 1374, then sold to the Angennes family in 1384 - they continued to own the Chateau de Ramboillet until 1699.

This castle was substantially destroyed during the Hundred Years war, around 1425, and subsequently rebuilt. During the following decades the Angennes continued to embellish the castle and bought a large amount of land around the property and it became a popular centre for hunting.

Because of this, the castle gained importance as an occasional royal residence - King Francois I came here to go hunting during the first half of the 16th century, and it was also here that he died in 1547. During the 16th and 17th centuries, work continued to improve the castle, to create formal gardens and to acquire more land around the property. 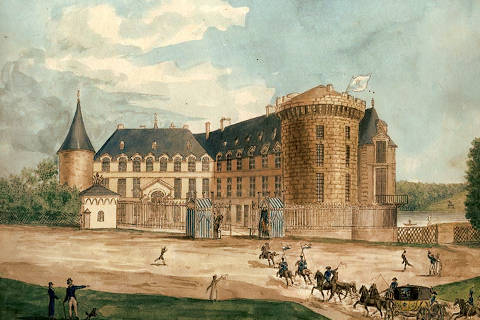 It was in 1783 that the Chateau de Rambouillet passed to Royal ownership, when Louis XVI bought it from his cousin to use as a base for his hunting expeditions. He converted the original stables into accommodation for staff and built new stables for 500 horses: we can only imagine that his hunting parties were quite substantial affairs!

The wife of the King, Marie-Antoinette, thought the chateau very outdated, so King Francois I carried out major works of improvement and updating in an attempt to please his wife.

After the revolution the castle was abandoned for a few years, but soon found a new use when Napoleon I developed plans for the property. Both Napoleon I and Napoleon III, as well as King Charles X (the King of France during the brief period that the monarchy were restored in France in the early 19th century) came here to go hunting, and King Charles abdicated while at the castle.

The Chateau de Rambouillet continued to be a much loved destination for the Presidents of France in the decades that followed, and by the end of the 19th century it had become their official summer residence. General de Gaulle frequently held important receptions at the castle, and more recent engagements have included the G6 meetings of leading industrialised nations, Kosovo peace agreement discussions, and state visits by Boris Yeltsin and Nelson Mandela.

The castle that we see today in part retains a medieval defensive form with towers in each corner and the Francois I tower the main medieval building (and named for the King who died in the tower), although the castle has been very extensively altered during the following centuries including a substantial extension in the 18th century and the removal of the east wing of the castle.

In recent years, the exterior of the castle has also been completely refurbished.

The extensive gardens and parkland that surround the castle were laid out in several stages over the centuries, principally during the 17th century. Beyond the gardens, the Chateau de Ramboullet is surrounded by 200 square kilometres of land, much of it covered by ancient forests.

Although there are many rooms in the castle that can not be visited because they are stll in use for official purposes, your visit does include two important rooms - the dining room (salle a manger) and the Marble Hall (salle des marbres)

You will also visit the Queen's Dairy (laiterie de la reine) and the Cottage of Shells (chaumière aux coquillages) in the ground of Chateau de Rambouillet. The interior of the Cottage of Shells is inlaid with patterns created with shells and is very pretty, and the interior of the dairy was created by the most illustrious artists of the time and has several impressive artworks and rooms to see.

Note: the Chateau de Rambouillet is open for visits almost every day of the year but always closed on Tuesday and alwys closed for lunch from 12.00 - 13.30. The visit to the inside of the castle does not take long and costs around 10 euros, so you will probably want to visit if you also want to spend time exploring the park and gardens. 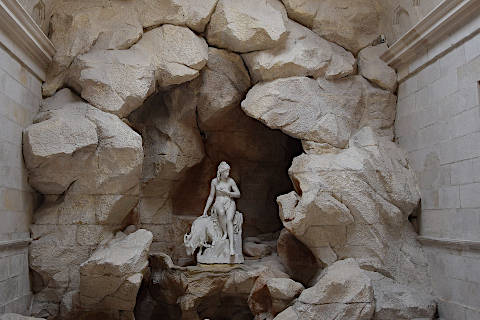 In this part of France you are well placed to visit other important monuments including the Palace of Versailles and the cathedral of Chartres. Of course, Paris is also close to here and has many important sites and attractions: see the Paris guide.

See more castles in France. You can find more travel ideas in the Paris region guide.

Map of Chateau de Rambouillet and places nearby

Visit near Chateau de Rambouillet with France This Way reviews