The Chateau de Losse is a very pretty castle in the Dordogne department of south-west France near to Montignac.

France This Way comment: as well as being a charming castle, the Chateau de Losse is set in grounds that have been very attractively gardened, so a visit is very enjoyable.

The Chateau de Losse began life as a fortress in the 11th century when the Losse family came to the Dordogne department from Flanders. In the 16th century Jean II de Losse added a beautiful hall built in the Renaissance style that was hugely popular at the time. This is the main residential part of the castle and is open for guided visits. 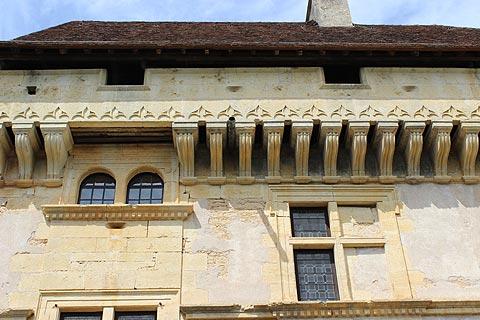 Surrounding the castle there are huge defensive walls and a number of defensive towers. You enter the castle across a moat and through a large fortified gatehouse: this is the largest of its kind in the whole of France.

Once through the gatehouse there is a large courtyard with the Renaissance hall in front and to the left you can follow a path leading to some of the lovely gardens of the castle.

The guided visit of the buildings leads you through the various rooms of the castle, all decorated in 16th century style and giving you an insight into the castle as Jean II de Losse would have known it. In the basement there is an arms room with some of the weapons available in the 16th century. In this room you can also admire the vaulted ceiling which is not only decorative but provides the strength to support the stone floor of the floor above.

The dining room, salon and bedroom can all be visited and there is some beautiful furniture in marquetry to be seen, which was very popular at that time.

A huge terrace looks out over the River Vezere which runs along the edge of the chateau de Losse. The river is often dotted by canoes in the summer.

The gardens of the Chateau de Losse

The castle has some lovely gardens. There is a lovely pathway towards one of the towers and each side of the path has clipped box in a kind of crenellated pattern - very fitting for a castle! Inside the box hedging is filled with catmint and growing up the walls behind are lots of white roses.

Below this area near the stables is a large formal area with clipped box edging a square pattern and inside balls of clipped lavender and santolina. A water rill along the centre leads to a water fountain on one edge.

Outside of the moated area there is a bamboo maize and also attractive formal gardens with long borders of purple flowers. You can also wander through the castle moats (now dry) and get an impression of the scale of the huge defensive walls towering above you.

There is a picnic area for picnics at chateau de Losee and there is a tea room in the 'Jardin de la Princess'. 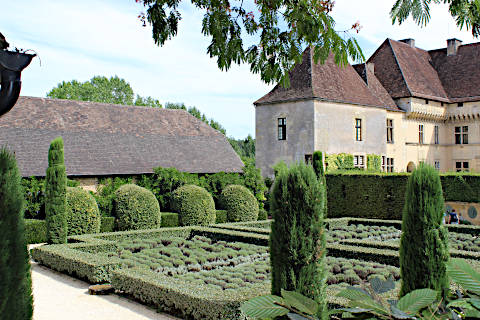 The Chateau de Losse is very close to the pretty riverside town of Montignac and the famous Lascaux caves.

Map of Chateau de Losse and places nearby

Visit near Chateau de Losse with France This Way reviews