The Chateau de Lanquais is in the southern part of the Dordogne department (so south of the river). To reach the castle you can cross the river at St-Capraise-de-Lalinde or Couze-et-Saint-Front.

France This Way comment: the Chateau de Lanquais is less part of the tourist circuit than many of the castles along the Dordogne river, but is a castle with an interesting history and mix of architectural styles so merits a detour if you are nearby and want to visit a castle, although it is not restored to the standard of the more visited castles in the region. 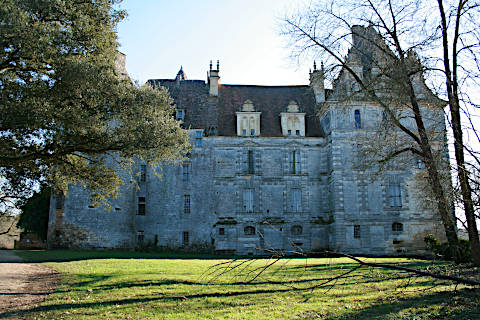 The two parts of Chateau de Lanquais are quite different in appearance and can be clearly distinguished. (You can see this clearly in the photo below, with the clear transition between the medieval style on the left and the renaissance style on the right.)

The part of the building that was the original, defensive and fortified, castle dates from the 14th century, and mostly comprises the round tower and the adjoining hexagonal stair tower. The building was then much expanded in the latter part of the 16th century, to add parts that offered more comfortable living accommodation using the renaissance style - and in particular copying many features from the Louvre.

Because of this similarity with the architecture of the Louvre, the Chateau de Lanquais is sometimes referred to as the 'unfinished Louvre of Perigord', although that description might raise your expectations of a visit a bit too high...

Inside the chateau you can visit various salons, apartments and bedrooms as well as the kitchens and the storage caves below the castle. The interior is impressively furnished with magnificent chimney places and period furniture, although many parts can not be visited because they are rented out as holiday accommodation.

The castle is surrounded by park and trees rather than French style gardens, with glimpses through the trees down to the river and Lanquais plan d'eau (leisure area) below. It is possible to walk around the circumference of the Chateau de Lanquais by following a small track. 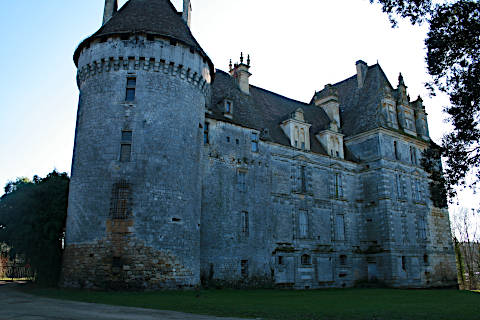 After visiting the castle you can pass a few minutes exploring the village of Lanquais, which has a sprinkling of interesting medieval buildings. Among these is a stone building with a very large roof between the castle and the village - this is an ancient barn now used for occasional concerts.

There are several villages with historic centres that you can visit near the Chateau de Lanquais, including Molieres and Issigeac, and the town of Bergerac is to the north-west of here.

Map of Chateau de Lanquais and places nearby

Visit near Chateau de Lanquais with France This Way reviews