Langeais castle is in the centre of the small town of Langeais, a short distance to the west of Tours and in one of the most visited parts of the Loire Valley.

France This Way comment: although Langeais castle is not one of the most important castles to visit in the Loire Valley if your time is limited, it is certainly worth a visit if you have the time and are nearby.

The Chateau de Langeais, like many in the Loire Valley, combines the dual roles of defensive fortifications and comfortable living - you can appreciate the former as you arrive at the castle with its high walls and towers - while the interior of the castle is furnished rather as a comfortable place to live. It combines the medieval style, with large towers and a drawbridge, with renaissance elements such as elegant stone windows. 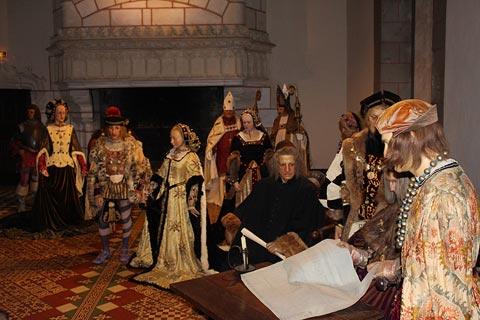 There has been a castle in Langeais since 994, and in the grounds of the current castle you can still see part of the original castle keep: in fact, this is the oldest castle keep still in existence in France. Much expanded during the following century, the Chateau de Langeais suffered very badly during the Hundred Years War which is why there is little to see of the original structure.

The main castle that we visit today was built in the grounds of the older castle in 1465, under the orders of Louis XI. It played an important role in the divisions between England and France that continued until 1532, at which stage Brittany was definitively restored to France.

One of the most important events to occur in the Chateau de Langeais took place in 1491, when King Charles VIII of France married Anne of Brittany here. This was an important marriage because it brought together the opposing families of the royals of France and the royals of Brittany.

Since this 'peace treaty' was the reason for the marriage, it was also agreed that Anne would marry Louis XII of France if King Charles died before a surviving male heir was born, which she did in 1499.

This was a complicated history, since Anne was already married before marrying King Charles - a marriage the French deemed unsuitable and which was subsequently annulled, and King Louis was already married when Charles died, so this marriage also had to be annulled so that Anne could marry Louis. You can see a recreation of the wedding ceremony in one of the rooms of the castle.

After the end of the struggles between Brittany and France, and especially following the French revolution, the castle slowly fell into disuse and abandon.

After a long period of neglect, the castle was much restored towards the end of the 19th century. On the death of the owner/restorer Jacques Siegfried in 1904 Langeais passed to the Institut de France, who still retain ownership.

It is thanks to the efforts of M. Siegfried, and the ongoing efforts of the Institut de France, that the castle is now held in such high regard as a renovation and recreation of a 15th century castle - both in the building itself and in the meticulous attention to detail with the interior furnishings.

You enter the castle in the centre of Langeais across a fully functional drawbridge - it is lowered at opening time and raised at closing time - and and enter the living accommodation in the main courtyard. There are lots of attractive renaissance style windows in the walls on this side of the castle walls.

There are 15 rooms in Château de Langeais that have been furnished in the style of the 15th century, including salons, bedrooms and a dining room. These include a great deal of attractive furnishings with tapestries and fireplaces among the highlights and are interesting to see. You can also follow a walk around the parapet.

Outside the Chateau de Langeais you can also enjoy the nicely maintained gardens, mostly in the French or medieval styles, although these gardens are quite small, and lovely views across the Loire river.

Behind the remaining wall from the 10th century donjon you can see a recreation of the scaffold that would have been used to build the castle. You can also climb the scaffold to see the view of the main castle: this is perhaps the best view of the castle so not to be missed!

Continue exploring the castle park which has a viewpoint across Langeais bridge as well as various structures to entertain your children such as a large treehouse. 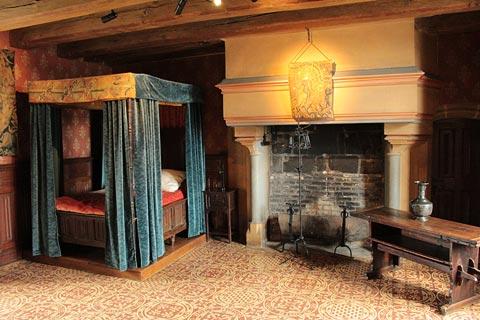 Several of the most visited castles of the Loire valley are close by including Azay-le-Rideau castle and Villandry castle.

Map of Chateau de Langeais and places nearby

Visit near Chateau de Langeais with France This Way reviews