Josselin castle is in the centre of the town of Josselin, in the Morbihan department of Brittany about 70 kilometres west of Rennes, next to the Oust River.

Perhaps the most remarkable feature of the chateau is that the Rohan family have owned the chateau for more than 500 years, including twice when enemies of the family ordered large parts of the castle to be demolished, and having rebuilt the chateau after each of these major events.

France This Way comment: the Chateau de Josselin is interesting because it has important architecture from the renaissance period as well as the 12th century 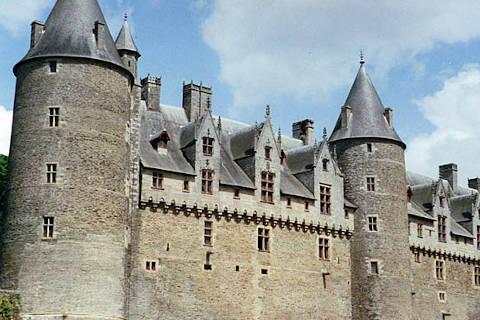 Although there has been a castle in this location since the first half of the 11th century the original castle was destroyed by King Henry II in 1168 when the English were trying to claim Brittany as their territory. Construction of the current castle started around 1173.

The castle was substantially reinforced in 1370, when several defensive towers were added, and also the living accommodations were much extended. In 1488 the castle was taken from Jean II of Rohan in 1488 and partly demolished by the Duke of Brittany, Francois II, because the Rohan family supported the French.

The daughter of Francois II gave the castle back to Jean II, and at the end of the 15th century substantial rebuilding and modifications took place with the addition of a large wing for residential use in the form of a renaissance style refurbishment. Because of this, the castle has a different style according to which side you are looking at with fortified defensive towers facing the river and a decorative facade facing the interior area.

In the 17th century the Rohan family moved to Pontivy, as part of the religious wars that took place in France at this time, when Henry II of Rohan led the protestants against the King. As a result of this involvement, Cardinal Richelieu ordered a substantial part of the chateau to be destroyed in 1629 and the castle keep and three of the nine towers were destroyed. The reneaissance part of the castle was left intact.

For the next 200 years the chateau de Josselin fell into neglect, although it was used as a prison in the 18th century, and further sections were demolished including two large towers. The 'rebirth' of Josselin castle dates from 1835 when major renovation and rebuilding work was started by the Duke of Rohan. This work continued for almost a century, and the castle was opened to the public in 1930.

The interior of the castle is very finely furnished, as part of a large scale project that took place towards the end of the 19th century. The most imposing of the four rooms that are open to the public are the Dining Room and the Drawing Room. The interior of the chateau has furnishings from the 17th to 19th century, with the grand fireplaces being a particular feature.

Many rooms in the castle are not open to the public, because it is still the private residence of the Rohan family, and photos are not permitted inside Josselin castle.

Outside the castle there are impressive gardens including the French formal style garden, an English parkland style garden with lovely views of the river, and the recent addition of the Rose Garden.

The castle is also visited for the extensive Doll's Museum in the adjacent stables. 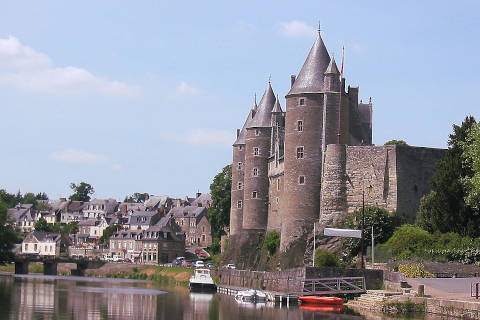 Of course, you will also want to explore the historic centre of Josselin while you are here. Close to Josselin you can visit the historic towns of Pontivy and Vannes.

See more castles in France. You can find more travel ideas in the Morbihan guide and the Brttany guide.

Map of Chateau de Josselin and places nearby

Visit near Chateau de Josselin with France This Way reviews