To the west of Azay-le-Rideau at Rigny-Ussé, the Chateau d'Usse is a lovely castle in the pretty surroundings of the Chinon forest and next to the Loire river, between Villandry and Chinon.

France This Way comment: Chateau d'Ussé is a true 'picture-postcard' castle, with circular turrets and chimneys ensuring it lives up to its claim to be the inspration for the castle of Sleeping Beauty.

The chateau d'Usse was built in the 15th century on the site of an earlier 11th century defensive castle. It was extensively modified in the 17th century, and it was at this stage that all historic defensive capabilities were definitively lost, as the northern side of the castle was cleared away to open up the fine views across the terraces and river and to create the courtyard that is now at the centre of the castle. 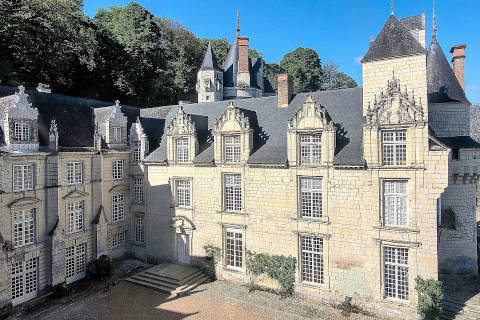 The chateau d'Usse is a substantial chateau, on a raised platform above the immaculate terraced gardens and with views across the Loire countryside. Because of the extended period over which the castle was built you see both medieval and renassance styles at the castle, as well as the classical style of the 17th century wing.

Inside the castle you can see many of the rooms decorated in period furniture and with life size 'dummies' wearing the clothes of the period - these are a good method to keep younger visitors interested as you visit the castle. The castle makes a great deal of being the apparent inspiration for the castle in Sleeping Beauty, and exhibits in the upper part of the castle retell the story.

The rooms include the Salle des Gardes (this was the entrance to the castle when it was built in the 15th century) with a ceiling painted in marble effect; the Salon Vauban with a desk of ebony, made in the 16th century and decorated with lapis-lazuli; an impressive gallery with 18th century tapestries long the walls, the original kitchens and a 17th century staircase with a wrought iron balcony.

You can also see several less important rooms and the large attic, wth impressive carpentry work in the style of an 'upturned boat'.

The extensive park that surrounds the castle is also very picturesque, and her you can see many of the associated buildings such as the chapel, the stables with their collection of carriages and some troglodyte caves as you follow the path around the Chateau d'Ussé.

There is an area of formal gardens in the French style, and an extensive park with mature trees to explore.

The chapel, very close to the main castle, is one of the highlights of a visit and has a very ornate facade contains some fascinating objects including the beautiful carved wood in the choir section. 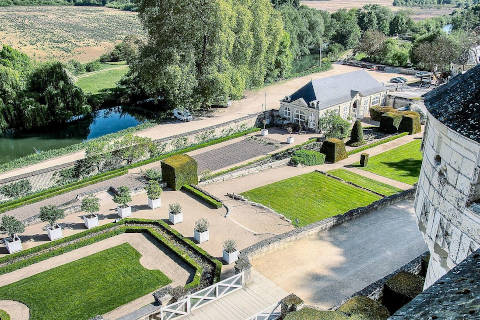 Map of Chateau d'Ussé and places nearby

Visit near Chateau d'Ussé with France This Way reviews

The French version of this page is at Chateau d'Ussé (Francais)