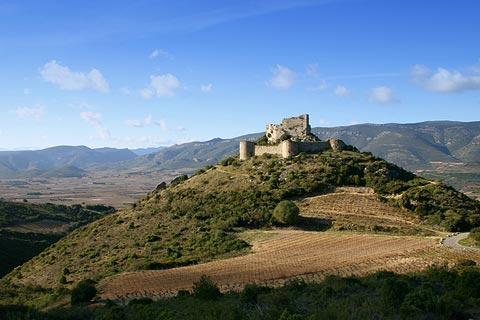 The Château d'Aguilar is one of the famous 'cathar castles' of southern France, situated in Tuchan in the Aude department of the Languedoc-Roussillon region.

The hill the castle is on is less 'dramatic' than some of the cathar castles, being really quite a small hill of 96 metres altitude rather than a craggy mountain ridge, so is perhaps less 'typical' of what you expect to see when you visit a cathar castle.

The castle dates from quite an extended period, partly built perhaps as early as the 12th century (or even earlier) but with subsequent works carried out over the following two centuries. 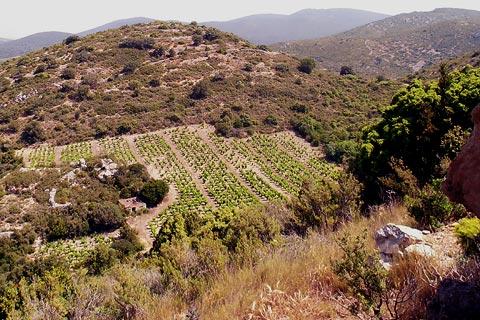 There are several stories about the early history of Château d'Aguilar and the de Termes family, often inconsistent with each other and usually with no supporting documentation. Here we have tried to put together the most probable among them...

It seems that around the end of the 11th century or early 12th century a local Lord and cathar called Raymond de Termes owned the lands here, which included the Château de Termes. This was seized by Simon de Montfort in 1210 as part of the crusade against the cathars, and Raymond de Termes was imprisoned in Carcassonne.

His son, Olivier de Termes, was then deprived of his castle here in 1215 and the Château d'Aguilar also passed under the control of the King. Olivier de Termes was part of an unsuccessful revolt against the crusaders and siege of Carcassonne in 1240 under Viscount Trencavel as part of which he temporarily reclaimed the castle.

The castle was again seized by the King who kept it until 1250 when it was returned again to Olivier of Termes: by 1245 he had converted to Catholicism and regained favour with the King due to his achievements as a crusader. He spent most of the remainder of his life on crusades to the Holy Land.

By 1262 the Chateau d'Aguilar was again under royal control, this time having been sold freely rather than captured, and played a role as one of the castles that defended France from incursions into France by Aragon and the Spanish to the south.

As part of this role the castle was also substantially fortified. These additional fortifications included an extra defensive wall built around the entire castle. However the castle was still captured in 1525 until it returned to the King of France in 1544 after a peace treaty was signed.

The castle's defensive role against the Spanish was maintained until the Treaty of the Pyrenees was signed in 1659, after which the castle fell progressively to ruin. 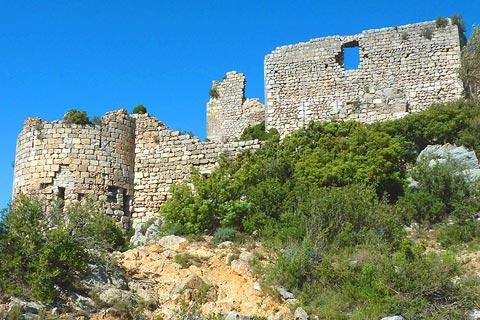 At the Château d'Aguilar today you can still see the two rings of defensive walls, which are roughly hexagonal in shape, and the outside wall incorporating several semi-circular towers. The castle buildings within the walls are largely fallen into ruin.

Despite the relatively low altitude you also have extensive views and attractive views across the Tuchan plain, the vineyards and the hills of the surrounding region.

The castle is open from the middle of April to the end of October, admission price 3.50 euros for adults and 1.50 euros for children up to 15 years old.

You can discover more of the best known cathar castles of France close to Chateau d'Aguilar. Best known among these, and only a short distance to the west of here, are the Chateau de Queribus and the Chateau de Peyrepertuse.

Your visit to this region will certainly also include a visit to the town of Narbonne on the Mediterranean coast, and we also recommend you travel a little further to visit the remarkable historic town of Carcassonne.

Map of Chateau d'Aguilar and places nearby

Visit near Chateau d'Aguilar with France This Way reviews

The French version of this page is at Chateau d'Aguilar (Francais)