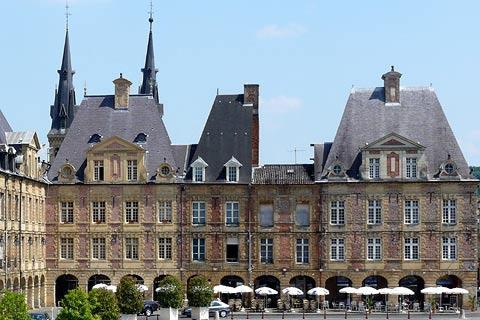 Charleville-Mezières is an important town in the Champagne-Ardenne region of northern France, and also the prefecture town for the Ardennes department. Although it is not a major French tourist destination you will find a great deal to enjoy in the town when you visit including several imposing historical monuments.

The achievement of the town is particularly impressive when you realise that more than half of Charleville was destroyed in bombing at the end of the First World War, and a great deal of reconstruction was required in the following decades.

A visit to Charleville will start in the Place Ducale, one of the largest and most impressive squares in France.

Covering about 10,000 square metres, the Place Ducale was laid out in the early 17th century and still retains the original design and buildings, with imposing townhouses above arcades at ground floor all around the square that follow a remarkably unified style typical of the 17th century (although many of the steep tiled roofs needed replacing after WWI).

The Town Hall in Charleville is also a substantial building, with a belfry and clocktower, two towers and an ornately decorated facade in the neo-gothic style. What you might not realise at first glance is that the building was only built after the First World and completed in 1930.

The most important religious monument to see in Charleville-Mezieres is the Basilica of Notre Dame d'Esperance. Building on the basilica started in 1499 and finished more than 125 years later, much of the building in the flamboyant gothic style.

Despite a colourful history including substantial fire damage in 1682 and also damage with the allied bombardments at the end of the first World War, the church remains essentially intact (or reconstructed as the original), except for the stained glass windows that had been destroyed and were replaced between 1956 and 1979 - these windows are notable attractions in their own right and by a reputed artist called René Durrbach, and successfully combine modern designs and colours with the church itself.

You will also see the 16th century Church of Saint Lié of Mohon in Charleville-Mezières, above all interesting for the facade with its decorative renaissance style entrance, octagonal towers and the decorative balcony and arches at first floor level.

Another notable building in Charleville is a 17th century mill, with a very imposing facade in a neo-classical style that incorporates four large columns. The building is now home to a museum dedicated to Arthur Rimbaud, the well known 19th century French poet who was born in the town.

A short distance north of the centre of Charleville-Mezieres you can visit the Terraltitude Adventure Park, for activities such as accrobranche, free-jump, bungee jump, the longest zip-wire in Europe and many others.

A few kilometres south-east of the town centre, the Fort des Ayvelles was built in the 1870s after the Franco-Prussian war and played a role (unsuccessfully) in the French defences in 1914. As well as visiting the fort, you can alse explore the park that surrounds the structure.

Map of Charleville-Mezieres and places nearby

Visit near Charleville-Mezieres with France This Way reviews

Plan your visit to Charleville-Mezieres, Ardennes

The French version of this page is at Charleville-Mezieres (Francais)