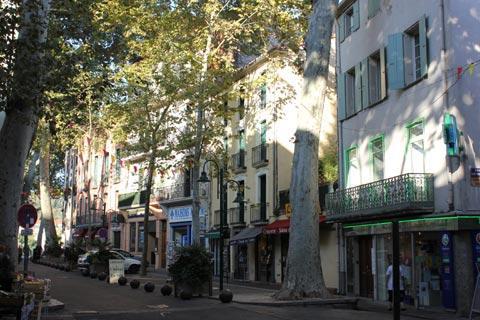 If I was pressed, I would have to say that much of the architecture in the western Pyrénées region is not especially remarkable, and some of the towns are less than attractive. To compensate, they have built Céret! Céret is a lovely little town, with cafes and art shops, shady trees and a lot of character, based around narrow streets between the small open squares, and with parts of the old town walls still standing.

The most surprising highlight in the town is the 'Museum of Modern Art' - with works by Picasso, Chagall, Dufy and Dali, so we suggest you start your visit there, or at least keep it high on your list for after you have explored the town!

The collection began with pictures donated by artists who had painted in Ceret and then between 1950 and 1957 the collection was given a huge boost by the donation of a collection of 28 pieces of ceramic art by Picasso and 14 sketches, drawn in Collioure, by Matisse. The museum now has an important collection of modern art works and is well worth a visit. 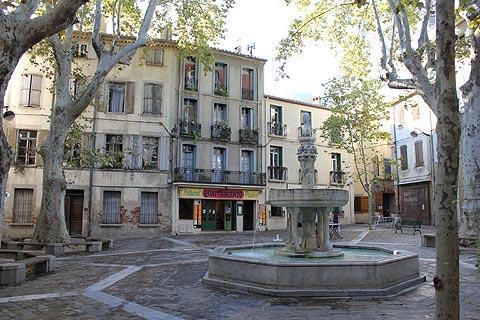 In fact, both Matisse and Picasso lived in the town, giving rise to its claim to artistic fame. They were not the only artists who flocked to the town and many famous names of the 20th century spent some time in Ceret or the surrounding area. In 1950 two artists, Pierre Brune and Franck Burty Haviland open the art gallery.

There is a walk around the town called the 'Chemins Sublimé' which highlights some of the buildings in Ceret that were painted by the likes of Picasso, Dufy and Soutine and next to the buildings are reproductions of the paintings themselves. You can pick up a map from the tourist office.

As well as its links to some of the worlds most famous artists Ceret has some interesting buildings such as Les Capucins, a lovely ancient convent on the edge of town. It was built in the 16th century and in 1932 was bought by Franck Burty Haviland who came to live here. He invited various famous artists of the 20th century to stay with him at Capucins. It is privately owned and unfortunately cannot be visited.

One of the most striking parts of the town is the Place Picasso and the Arcades. These are the parts that remain of the original ramparts, though they are restored having been destroyed several times in the history of Ceret.

La Porte de la France is another part of the old ramparts and one of the original gateways into the town. Two main entrances to the town were built - this one to enter from France and the Porte d'Espagne to enter from the Spanish side. Next to the Porte de la France is a remarkable house with an ornate facade in an italien style which dates back to the 19th century. La Tour d'Espagne is also part of the interesting ensemble on the Place Picasso. La Porte d'Espagne was the entrance to the town, through the ramparts, from the Spanish side.

La Place des Neuf Jets was built during the reign of the kings of Majorca, who played an important role in the turbulent past of this area of France. As its name suggests there is a fountain with nine jets sat the middle of this charming square.

The 17th century hospital of St Pierre now known as La Capelleta is home to an exhibition of local contemporary art. 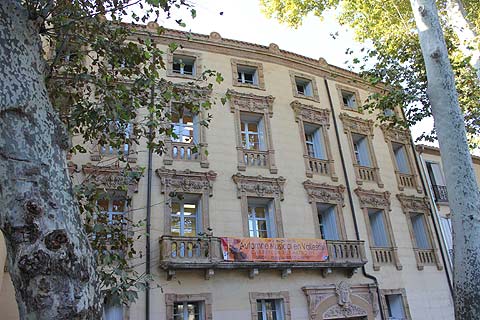 Ceret also has a lovely 14th century stone bridge across the river Tech. It is a single arch of 45 metres, quite remarkable for a medieval construction. It is called the devil's bridge (le pont du diable) because, legend has it, the devil built it in a single night!

Along the coast east of Ceret are several long flat sandy beaches and the Côte Vermeille, the last few kilometres of coast before reaching Spain. On the whole the coastal towns are pleasant rather than lovely and over-development has damaged the towns quite substantially, although Collioure is wonderful and retains its charm of earlier times.

Keep following the coast road for some good views, with the mountains one way and the sea the other.

Walking and cycling are of course important in the Pyrenees. On a fine day the roads can be as congested with cyclists as cars! Ask at the local tourist office for information about walks in the region. We stayed in a cottage about 20 kilometres inland from Perpignan, midway between Céret and Queribus. Perfect location, and ideal for walking, cycling, and the obligatory trips to the beach with the children.

Map of Ceret and places nearby

Visit near Ceret with France This Way reviews

Plan your visit to Ceret, Pyrenees-Orientales

Regular market(s) are held in Ceret each Saturday. (Markets are held in the morning unless stated.)

The French version of this page is at Ceret (Francais)