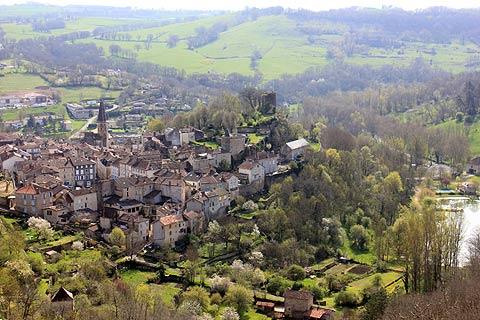 Caylus is found in the south-east of the Tarn-et-Garonne department in the Midi-Pyrennes region.  It sits in a lovely location winding up a hill with views over the surrounding countryside.

At the heart of Caylus is the main square with its 16th century Market Hall. Surrounding the hall with its deep roof and stone pillars are some lovely arcaded townhouses all around the square. Of particular interest is the 'King's House' on one edge of the square as it was here that King Louis XIII stayed whilst organising the siege of nearby Saint-Antonin-Noble-Val. 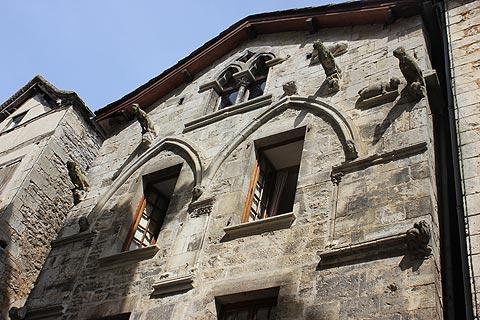 Lower down in Caylus make sure you look out for the House of Wolves. This 14th century house is so-called for the four sculptures of wolf-like animals sticking out from the upper storey. This building is a classified historic monument. Further along the street is the Maison Ravaisson, dating from the 18th century and which was the home of the French philosopher Felix Ravaisson.

Near to the 'House of Wolves' is the 14th century church of St Jean-Baptiste. The church is an attractive enough building but it is the inside which is really worth visiting. It contains the most beautiful stained glass in the department and is home to a magnificent wooden sculpture of Christ by the contemporary sculpter Ossip Zadkine.

Originating from Russia, Zadkine came to live in Caylus in a house next to the church with Renaissance door and windows for a period of time before the war (being Jewish he was forced to take exile in the USA during the war). After the war, remembering his stay in Caylus he made the magnificent sculpture of Christ that you can see in the church today. Given its contemporary look this was not without some opposition originally but happily the curé won and the statue was installed.

As well as 'Le Christ de Zadkine' there are some wonderful paintings in the church.

If you keep winding uphill in Caylus you will pass an attractive modern chateau which was built in the 18th century and renovated and transformed in the 20th century. The route then winds its way gradually uphill to the ruins of a 12th century castle. Not much remains of the castle but from its terrace you get some good views over the Labarthe wood and a little lake. 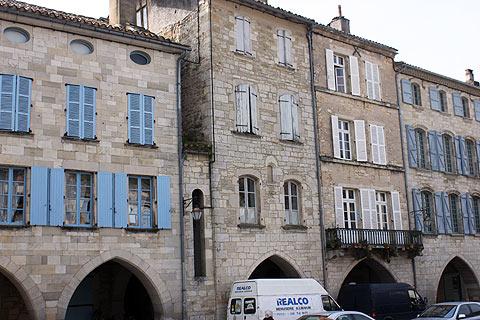 Before leaving Caylus be sure to visit the old 'lavoir' or washhouse built in 1923. This is a very attractive and ornate metal structure and unlike any lavoirs that I have seen elsewhere.

There is also a small artificial lake on the edge of which there is an eco museum displaying fauna and flora from the region. A visit to the museum is free.

Caylus is just 9 kilometres from the attractive town of Saint-Antonin-Noble-Val, a lovely small town with a medieval centre and definitely not to be missed if you are in the area, and 17 kilometres from Najac, classified as one of the most beautiful villages of France.

Map of Caylus and places nearby

Visit near Caylus with France This Way reviews

Plan your visit to Caylus, Tarn-et-Garonne

The French version of this page is at Caylus (Francais)