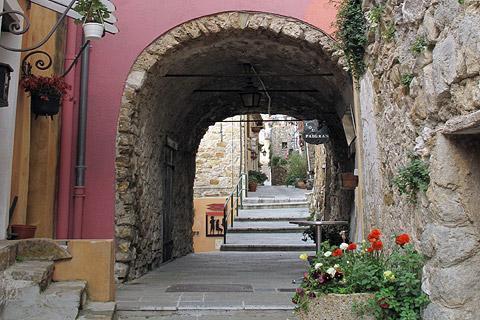 Castellar is a small village in the hills to the north of Menton, a short distance east of Sainte-Agnes. While most perched villages are on the side of a steep hill, Castellar is along a high ridge so you get great views from both sides of the village.

France This Way comment: Castellar is not a major destination but merits a stroll when you are passing: visitors will usually explore the village while touring the perched villages in the southern Alpes-Maritimes department such as Sainte-Agnes, Gorbio and Peille

One of the first highlights of a visit is the view of Castellar from the road if you go beyond the village towards the north-east, along the Chemin des Ganges de Saint-Paul, with the village stretched out along a hilltop and steep hills behind as a dramatic backdrop. 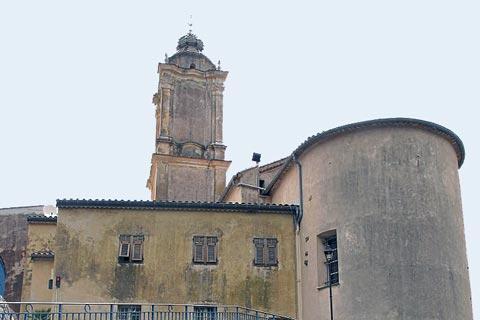 The parking is on the east side of Castellar. Inside the village it is easy to explore: there are four roads that are parallel to each other, and most of the sites of interest are along these roads. One of them, Rue Arson, is pedestrianised.

The layout of Castellar is more organised than most medieval villages. This is because the original village was in a very inhospitable location to escape pirate attacks, and when these ceased to be a problem the entire village was transferred after 1435 to this new location.

The centre of Castellar is quite picturesque with numerous small features to discover such as vaulted passages, fountains and staircases It doesn't take very long to visit, so we recommend you stroll along each of the four streets in the centre.

The most important monument in the village is the Church of Saint-Pierre, to the north of the centre. The church has stood here as long as the village although the church we see today includes an orange and yellow belltower in the baroque style that was added in the 18th century as well as substantial renovation work carried out in the 19th century after a fire damaged the building: hence the church is now in the neoclassical style.

Across the road from the church you can see the Palais des Comtes de Vintimille, although it is in rather poor condition.

Another noteworthy monument in Castellar is the Palais Lascaris. This building also has its origins in the 15th century, although it was rebuilt in the 17th century after being damaged in an earthquake. The most interesting part of the palace is the entrance, which is surmounted by a small tower and a dome that has been covered with colourful tiles.

Other religious monuments in Castellar include:

You will also see two towers that remain from the ramparts that once protected the village, one in Rue Arson and one in the square next to the town hall (now a restaurant), a gateway through the ramparts, and a traditional washhouse.

You can follow the road out of Castellar towards the north to see the ancient oil mill. 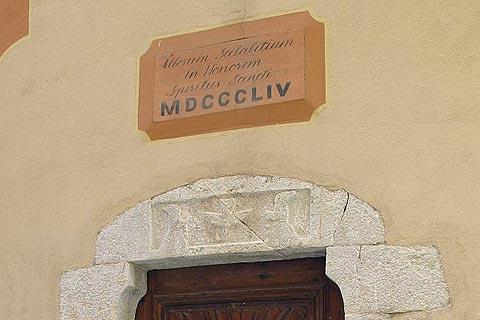 About one hour walk from the village you can see the ruins of the original village, now called Vieux Castellar.

Other villages you will enjoy visiting near Castellar include Sainte-Agnes and Gorbio. On the coast south of here, the town of Menton is a very lovely port town on the border with Italy.

Map of Castellar and places nearby

Visit near Castellar with France This Way reviews

Plan your visit to Castellar, Alpes-Maritimes

The French version of this page is at Castellar (Francais)