The small town of Cassel is in the very north of France, a few kilometres south of Dunkirk and Calais and close to Saint-Omer. In the region known as Flanders, several small hills can be seen on the otherwise flat plains, and the highest of these hills is at Cassel.

Cassel is proud of its attractions that have led to the village being listed as a 'town of art and history' and that in 2018 helped the village win the annual 'Village préféré des Francais' competition (a competition on television voted for by viewers). It is a pleasant town to explore. 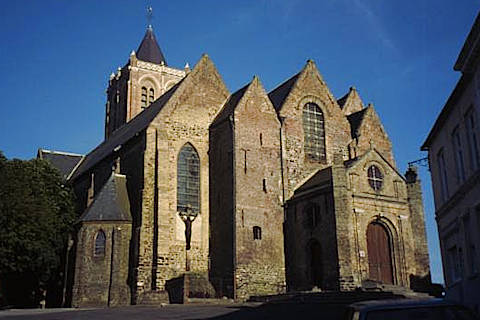 The centre of Cassel is centred around a large square, which is surrounded by several smaller streets. The main religious building in Cassel is the Collegiale Notre-Dame de la Crypte church, with a square tower and three naves, at one end of the large square.

Although the church has 10th century origins it has been modified and rebuilt many times over the centuries. Inside the church the principal work is the statue of Notre Dame de le Crypte in a niche next to the altar, as well as several paintings from the 18th century.

Marshall Foch addressed the church each day with prayers from next to this 16th century statue during the First World War and the statue is said to have saved the town from the bombardments that destroyed much of Flanders. You will also see a statue of Marshall Foch on a horse in the town near the Moulin.

Another religious building in Cassel is the Chapel of the Jesuits with a baroque style facade and built in the 17th century.

One of the most attractive buildings in the town centre is now the Museum of Flanders. Called the Hôtel de la Noble Cour, this building was built in the 16th century and originally used as a law court. The building has renaissance style decorations in the facade and the museum contains a selection of artworks - paintings, engravings and sculptures - by artists of the region.

At the top of Mont Cassel, as the hill in the village is called, you are at an altitude of 176 metres. Here at the summit there is a public garden and the photos you often see of the view across the Flanders plain from Cassel are taken from Mont Cassel. The garden is nicely maintained and includes various smaller gardens to explore: a kitchen garden, a traditional French garden, a contemporary garden...

The windmill in Cassel is a reminder of the history of the village: because of its raised position Cassel was well placed to have mills to prepare flour. At one time there were more than 20 windmills here, but now only one remains and this is a replacement of a 16th century windmill that was destroyed by fire in 1911. 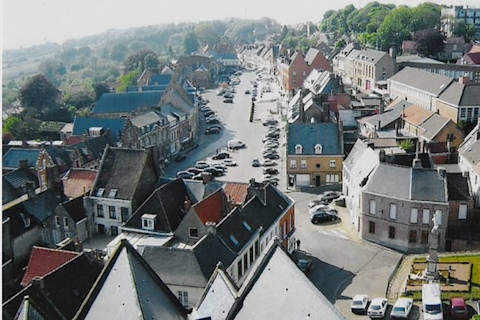 Not far from Cassel you will enjoy a promenade around the small town of Esquelbecq, and around 20 kilometres from here there are several buildings of interest in Saint-Omer.

Map of Cassel and places nearby

Visit near Cassel with France This Way reviews

Plan your visit to Cassel, Nord

The French version of this page is at Cassel (Francais)