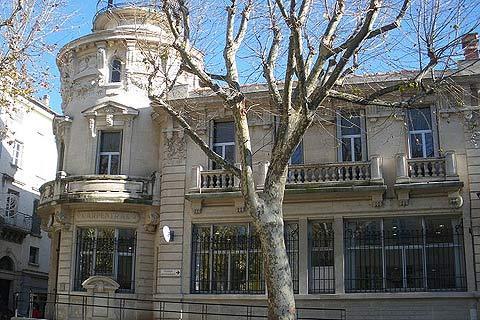 Carpentras is an important regional town north-east of Avignon and towards the centre of the Vaucluse department of Provence. A bustling local town, Carpentras has much of interest to explore in its old centre - recognised in the town's official listing as a 'town of art and history'. 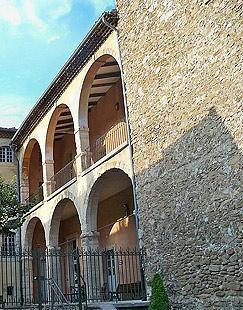 The site of Carpentras has been occupied since antiquity, first by a tribe of gauls then, from the 2nd century BC, by the Romans for who it was at the centre of an important trade route.

In the 14th century the city became an important centre for the Popes, driven out if Italy who established themselves in Avignon and Carpentras.

The popes also gained a reputation for providing a safe haven for the Jews, who were persecuted in much of France - Carpentras was at this time a separate region, not part of France - and a large Jewish population settled here, including the building of a synagogue which is the oldest in France and can be visited in the town.

Despite this relative freedom the Jews were still subject to increasing suppression over the centuries, forced to wear clothes that separately identified them, to live in a part of the town which was closed off each evening, and only permitted to carry on a limited number of trades such as money lending and horse trading.

The town remained wealthy for the following centuries and it was only in 1791 that the 'County' around Avignon and Carpentras was incorporated into the French republic. it was also at this time that Jews throughout France became entitled to the same rights as everyone else, and the jewish community here largely dispersed elsewhere. 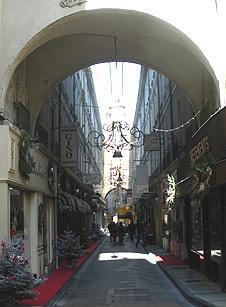 Your visit will focus in the streets at the heart of Carpentras, where shops and impressive townhouses line open squares containing shady trees and numerous babbling fountains, and of course plenty of cafes where you can sit and watch the world go by.

To discover the architectural highlights in Carpentras, pass first through the entrance at Porte d'Orange, the 14th century square tower that once formed part of the town's defences, on the northern edge of the historic centre. The remainder of the ramparts, which once included more than 20 towers and four entrance gates, were destroyed in the 19th century to make way for the expansion of the town.

In the town itself you will discover the gothic-baroque style Cathedral of Saint Siffrein, completed in 1531 and containing some notable decorative artwork such as the 15th century stained glass windows. The cathedral was built in gothic style during the 15th century for Pope Benoit XII, the last of the popes to be based in Avignon.

See also the very grand 18th century baroque Hotel Dieu (with an interesting recreation of an 18th century pharmacists); and the 17th century Episcopal Palace (which became the Palais de Justice after Carpentras was incorporated into France at the end of the 18th century).

The Bureau des Postes, with its decorative round tower, was built in the early 20th century, while the Town Hall dates from the 17th century although it gained its more 'classical' appearance during conversion in the 18th century. 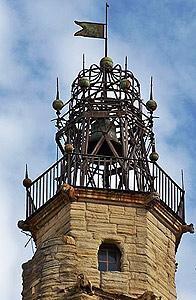 Other notable monuments include the 17th century 'Charity' building, where shelter was provided to the poor of the town and which is now the Carpentras Music School and cultural centre and the 19th century Passage Boyer, a covered street that is now a centre for shopping in the old town.

One of the oldest remains in Carpentras is the 'Roman Arch' in the Place d'Inguimbert, a small reminder of the long history of the town and with statues of two prisoners on the side of the arch. The Synagogue provides another reminder of times gone by - it has a 'recent' 18th century baroque-style interior, but actually dates from the 14th century and is the oldest (functioning) synagogue in France.

On the edge of Carpentras stands a substantial aquaduct. Built in the early 17th century to replace a medieval version, the aquaduct is more than 600 metres long and consists of a long series of large arches.

Market day in Carpentras is Friday, a good day to visit and see the town at its liveliest. The market is held in the Place de l'Hôtel de Ville, which was the centre of the old Jewish community until the 19th century, when the houses were cleared away to make way for this large open square.

You will discover numerous villages and towns of interest in this region as well as some lovely scenery. Our favourites include the historic centre of Avignon with the imposing Pope's Palace, as well as the villages of Gordes and Fontaine-de-Vaucluse, both a short distance to the south-east of Carpentras.

Map of Carpentras and places nearby

Visit near Carpentras with France This Way reviews

Carpentras is classified as a listed town of Art and History

Plan your visit to Carpentras, Vaucluse

A seasonal market is held in Carpentras on Friday. (Markets are held in the morning unless stated.)

The French version of this page is at Carpentras (Francais)