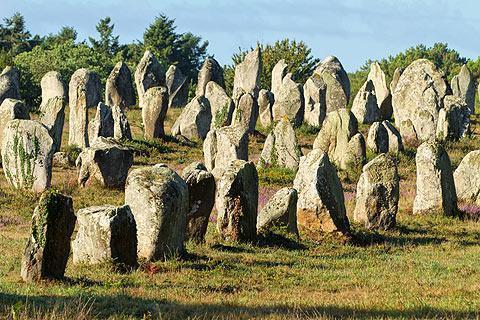 Carnac is found on the Morbihan coast of south-east Brittany. It is one of the most important megalithic sites in Europe, known for the very high number of impressive prehistoric monuments found in the vicinity, and is situated on the Crach River, west of the small port of Vannes.

The ancient monuments feature numerous standing stones - at least 3000 are still standing - and various dolmens and menhirs and other ancient artefacts. The monuments were erected over a period of more than a thousand years, starting with neolithic man (another great prehistoric site, Stonehenge, was also constructed over a period of 1500 years, not 'all in one go' as you might expect).

France This Way comment: a large number of the alignments around Carnac are now protected and surrounded by fencing that limits access, which is a shame but necessary if they are to be preserved.

A tourist excursion though the monuments of Carnac could begin with the 'mound of Saint-Michel' - a mound over 100 meters long, 35 wide and 10 metres high which protects several graves inside, where artefacts have been found dating back to 3500 BC. 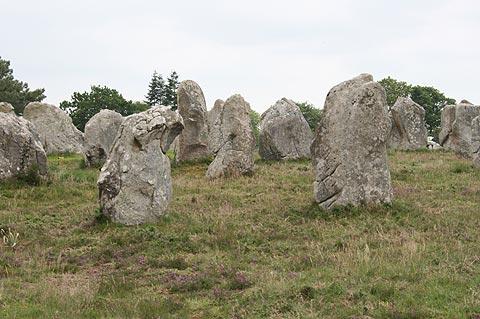 Not far away you can see the famous alignment of 'Le Menech', preceded by an oval cromlech over 100 meters in diameter and surrounded by 70 stones of one meter in height - the alignment of Le Menech heads toward the north-east, with eleven parallel lines monoliths. A Cromlech oval with a diameter of 90 meters, and close by the avenues of stone (1099 of them) are found along with a large dolmen.

An area of 240 meters divides it from the second alignment called 'Kermario', (the "place of the dead"), which continues in the same direction with 10 parallel rows over a width of 100 meters and a length of over one kilometre, with over 1000 tall menhirs.

Towards the north a giant menhir stands, known as the Giant Manius and to the south there is the Kerkado mound, which marks the beginning of the next alignment of Kerlescan, meaning the 'place of cremation'. This consists of more than 10 parallel rows of nearly 500 stones with different heights over a width of 140 meters followed by a semicircular cromlech approximately delimited by 40 monoliths.

To the south is the so-called "Petit Menech", formed by about 100 stones. In total, there are almost 3,000 menhirs, but excavations have identified certain alignments now no longer visible, such as one that followed the followed the Crach River from Sainte-Barbe and Plouharuel.

To the northwest of Carnac the Kerzerho alignments (at Erdeven) are still visible, and composed of rows more than two kilometers long and over 1000 menhirs.

Another fascinating megalith is east of Carnac, in the town of Locmariaquer, where there are the remains of a giant menhir - known as 'The Grand Menhir Brisé', because it broke into four parts after falling to the ground in the 18th century. We can only guess how the priests of the megalithic culture could construct such a megalith: more than 20 meters high and weighing over 200 tons and which, before raising, needed to be moved and taken to the right place.

Although it is a quiet town with limited tourist attractions, there is more to Carnac than prehistory and the town itself deserves to be explored.

In the town centre you can visit the Church of Saint-Cornely (1639), in Renaissance-style with three naves and a beautiful facade with attractive portico. Inside there are the statues of the Saints and several paintings of religious subjects attributed to Dupont, depicting "The Assumption of the Virgin" and the "Descent from the Cross." Next to the church there is a beautiful fountain dating from the seventeenth century.

In various local restaurants you can sample the Breton cuisine, the "crepes" and, of course, many dishes based on fish; seafood and shellfish fresh from local waters: oysters, clams, snails, and crab, perhaps with a bottle of Muscadet.

There is also a substantial Museum of prehistory in the town. 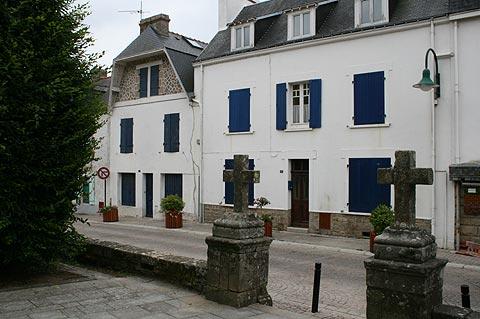 Other information and places to visit near Carnac

The Brittany coast here is very attractive - Carnac Plage just south of the town is a popular holiday and seaside resort with about two miles of beach. The beaches are very attractive, and inviting for long walks on the waterfront.

Map of Carnac and places nearby

Visit near Carnac with France This Way reviews

Plan your visit to Carnac, Morbihan

Regular market(s) are held in Carnac each Wednesday & Sunday. (Markets are held in the morning unless stated.)

The French version of this page is at Carnac (Francais)