Candes-Saint-Martin is a village ten kilometres to the south-east of Saumur in the Indre-et-Loire department of the Centre (Loire Valley) region, and within the Regional Natural Park Loire-Anjou-Touraine. The village sits on the banks of the Vienne River at the confluence with the Loire River, on a small hill with beautiful views across the surrounding countryside, and is listed among the most beautiful villages of France.

Saint-Martin, who gave his name to the village, arrived here secretly towards the end of the 4th century, destroyed a pagan temple already here (although some remains of the earlier building can still be seen) and converted the residents to Christianity. When he died in the village he was laid to rest in what is now one of the chapels in the church.

France This Way comment: Candes-Saint-Martin is a small village, but the charming church and the proximity to the village of Montoreau together make this a very worthwhile destination as you exploire the Loire Valley.

The best way to approach Candes-Saint-Martin is by walking from the neighbouring village of Montsoreau, although of course parking is available in both of these villages. 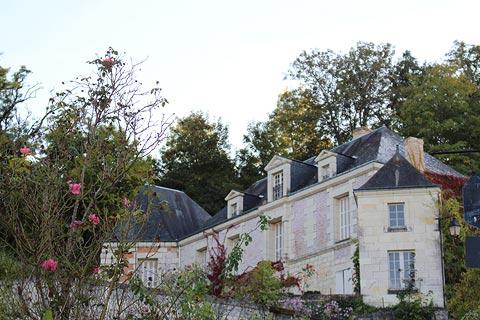 The main part of the village lies between the church and the Vienne River, and has an attractive old centre with some pretty streets and houses to explore and admire.

The highlight in Candes-Saint-Martin is the fortified collegiale church and the chapel Saint Martin, which dominates the village. The current church was built in the 12th and 13th centuries in the gothic style, and most of the fortifications were added in the 15th century. Several further modifications were made over the centuries but the nave and facade still retain the impressive decorative style.

The church is still an important pilgrim destination and is especially known for the many statues that decorate its facade, and for the stained glass windows tracing the story of the relics of Saint Martin. When I visited taped choral music was playing and added to the atmosphere inside. See collegiate church of Candes-Saint-Martin for details.

Most of the houses in Candes-Saint-Martin are built in the lovely white stone of the area and have grey slate rooves. The slightly austere look of the houses is softened by the fine detail in some of the stonework, and the plants springing up from every available spare bit of ground add a welcome touch of colour.

Other notable buildings in the village include the castle of the archbishops of Tours, in part dating from the 15th century, and the Hotel de la Prévoté: both behind the church. There are also some imposing 15th century townhouses and above the village there are some troglodyte cave dwellings built in the cliff.

After exploring the village you can walk along the Chemin du Panorama to the viewpoint above Candes-Saint-Martin. This gives you a great view of what is a particularly beautiful stretch of the River Loire at its confluence with the Vienne river. You can also see the first Nuclear Power station built in France (1957) 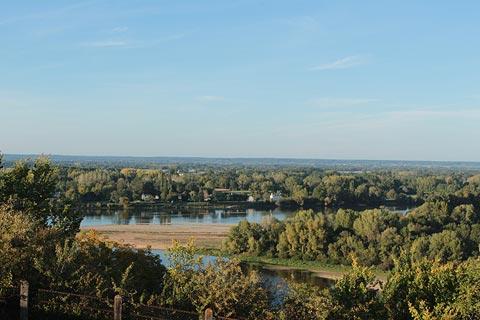 The walk from Candes-Saint-Martin to Montsoreau is very popular and pretty. Both villages are classified as most beautiful villages of France and one really merges into the other: the walk between the two is easy and this is much the best way to visit the two villages, rather than driving between the two.

The Abbey Fontevraud is a short distance to the south of here and not to be missed, and the small town of Chinon to the east of Candes-Saint-Martin has a lovely historic centre and an imposing castle.

Map of Candes-Saint-Martin and places nearby

Visit near Candes-Saint-Martin with France This Way reviews

Candes-Saint-Martin has received the following tourist classifications: one of the most beautiful village in France (plus beau villages);

Plan your visit to Candes-Saint-Martin, Indre-et-Loire