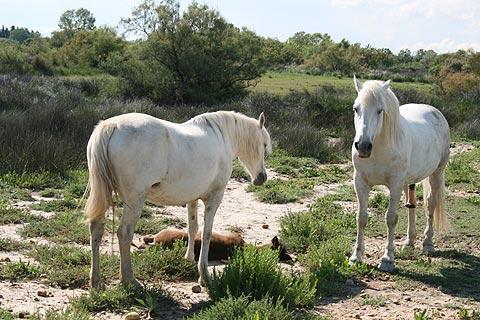 The Camargue is a Regional Natural Park, centred around the Rhone Delta on the border between Provence and Languedoc-Roussillon in the south of France. Covering more than 900 square kilometres to the south of Arles it is a large, flat area of marshes, fields, salt-flats and lakes, and the largest river delta in Europe.

Whichever direction you arrive from the Camargue is a surprising contrast, with its landscape quite unlike anywhere else in the south of France...

The Camargue Regional Natural Park is also home to an astonishing range of wildlife, including semi-wild bulls and the renowned Camargue horses, and many hundreds of species of birds. Other wildlife includes wild boars, badgers, flamingos, tree frogs and water snakes. The region is also reputed to have more than 40 species of mosquitoes, which can cause difficulties for visitors for most of the year except the winter. 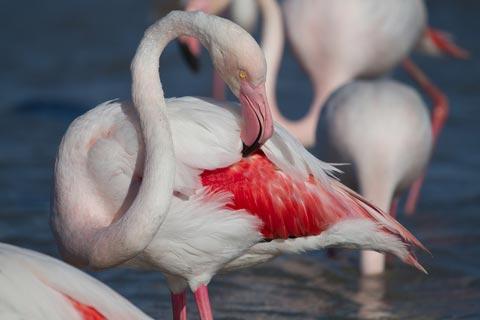 The Camargue region is the only breeding ground for flamingoes in France, with very large flocks nesting around the Etang du Fangassier, as well as being a major French rice production area, in particular around the Etang de Vaccares, the largest of the many lakes here and in the centre of the Camargue.

France This Way comment: you will see little from your car when you explore the Camargue except for the occasional small group of camargue horses and some birds - to enjoy the region you need to leave the road and explore a little! There are various marked trails in the region, to help you best see the flora and fauna.

You will certainly want to start your visit at the Information centre for the park at Mas du Pont de Rousty, on the D570 south-west of Arles towards Albaron. Here you can learn about the various walking and cycling trails, and the best places to see the natural environment, as well as activities at the time of your visit. A museum at Mas du Pont de Rousty also provides a useful introduction to the flora and fauna that you can see in the Camargue. Notable highlights include:

Of course, no visitor will want to come here without seeing the famous wild horses of the region. The semi-wild bulls of the Camargue are also fascinating to see, both in the wild and in local events. The local cowboys control the herds, with the bulls being used in local bullfights and also as a local speciality in the restaurants here.

The bulls also feature in a local sport where the young men have to grab something called a cockade from between the horns of the bull and escape unscathed - quite a feat and I have to say I'm rather surprised their mothers allow it(!), frankly it looks very dangerous but of course avoids the harm to the bull so is popular to watch among those who object to bullfighting. 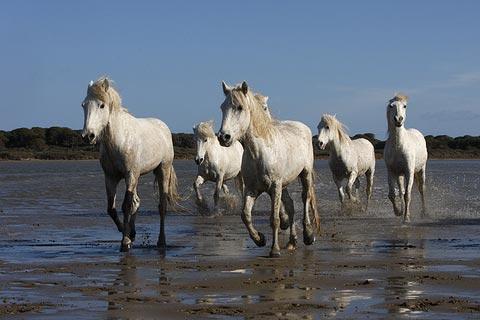 Intrepid visitors and horse enthusiasts also have the possibility to ride the famous horses, visit the ranches of the Camargue, and learn more about the breeding and training of these famous horses.

A particular architectural feature to look out for as you explore is the small simple whitewashed cottages of the guardians of the Camargue - the 'cowboys' who look after the horses and bulls that roam in semi-liberty here.

I have to admit that I have never quite seen the attraction in looking at salt flats, but they are found in various places around the coast of France so I don't always have the choice! In the Camargue the principal salt producing area is around Salin-de-Giraud where enormous salt drying areas can be seen, and their 'not of this world' appearance does have a certain artistic charm.

Other activities in the Camargue

The Camargue Natural Parc and the coast here together offer a large choice of activities to visitors. These include horseback riding, mountain biking, bull fights in Sainte-Maries de la Mer, various water sports, and for those with energy at the end of the day there are also theatres, nightclubs and other spectacles. 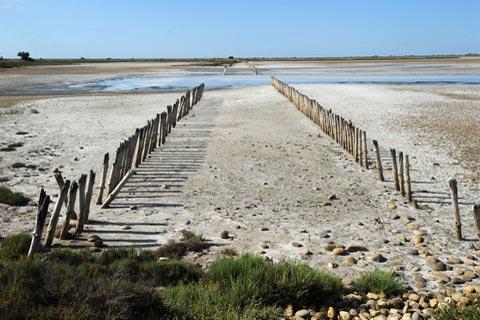 There are no substantial towns within the Camargue Natural Park itself so to explore the Camargue, your best starting point is Arles, found at the northern edge of the region, or Sainte Maries de la Mer on the southern coast.

An alternative base is Aigues-Mortes, to the east of the Natural Park, while a further option, if you want to combine the nature exploring with a seaside resort, is to stay at La Grande-Motte, along the coast to the west.

Map of Camargue and places nearby

Visit near Camargue with France This Way reviews

Camargue is classified as a recommended detour town (plus beau detour)

Plan your visit to Camargue, Bouches-du-Rhone

The French version of this page is at Camargue (Francais)