The cloisters of the abbey at Cadouin are in the centre of the village of Cadouin, in the south part of the Dordogne department.

Explore the cloisters of Cadouin abbey

France This Way comment: the cloisters at Cadouin are one of the most beautiful we have seen in France, especially in the season when you can also see flowers in the centre of the cloisters.

When you enter, there is a small museum that contains various religious artefacts from the church, including a replica of the shroud that once attracted thousands of pilgrims to visit each year. 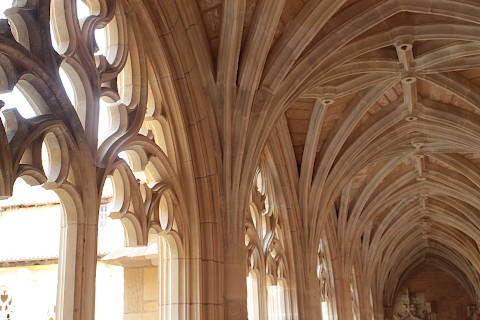 Although Cadouin abbey church next door was built in the 12th century, the cloisters date from the end of the 15th century: they were rebuilt after damage caused during the Hundred Years War. A large scale renovation project also took place in the second half of the 19th century.

There are galleries on all four sides of the cloister, which encloses a nicely maintained garden. The galleries are separated from the garden by a series of arches which include decorative stonework, and the arches of the roofs of the galleries are stone rib vaults.

When you visit you will have a detailed guide that explains each of these statues (or you can hire an audio guide). Among the most interesting are "The Confession" in the north gallery and "Lazarus and the Rich Man" in the east gallery. There is also a fresco in one of the galleries.

Although the cloisters we see today in Cadouin abbey were built in the 15th century, there are still several traces of the earlier 12th century cloister to be seen. These include the stone seats set in the wall of the north gallery, once used by the Abbot and the reader, and the door that leads to the monks' dormitory.

You will think the cloister is impressive today: it is hard to imagine what it must have been like before the damage caused after the revolution, at which time all the statues and more than 60 keystones were removed. It must have been quite a remarkable sight!

Entrance to the cloisters costs about seven euros. Slightly expensive in my opinion but still well worth paying when you visit. 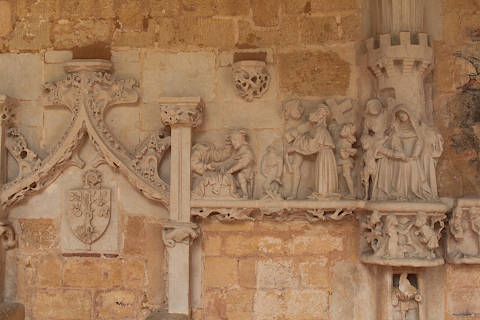 You will want to visit Cadouin abbey and explore the village of Cadouin while you are here. Another abbey of interest, although only a limited amount of ruins now remain, is just a few kilometres from here at Saint-Avit-Senieur.

Map of Cadouin abbey cloisters and places nearby

Visit near Cadouin abbey cloisters with France This Way reviews