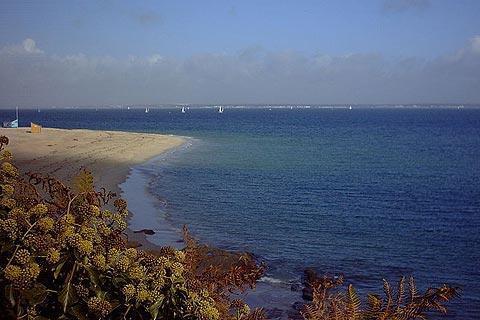 Ile de Groix is situated off the Finistere coast of southern Brittany, just south of Lorient. The island is  seven kilometres by three kilometres, making it the second largest Brittany island after Belle-Ile-en-Mer.

The historic development of Groix, and in particular its main town and the region around Port-Tudy, was due to tuna fishing. Nowadays tourism has largely taken the role, although an active fishing fleet still operates from Port Trudy.

Unlike some of the islands off the coast of Brittany, Ile-de-Groix is also large enough to have several small villages and hamlets away from the main port, each with its own appeal, so there is quite a lot to see here. In the main town on the island take a look at the steeple on the 18th century church - rather unusually it is topped by a tuna to indicate wind direction!

There are many attractive old fishermen's cottages to be seen, many of the little houses painted in bright colours, and the island also has several small chapels, two lighthouses, and a good number of public washhouses that you will come across as you explore.

The highlight of the island for beach lovers is the Plage des Grands Sables at the eastern end of the island. One particular unusual feature of this beach is that it is convex - a result of the unusual ocean currents that arrive from the top of the island to the north-west, and the south of the island.

Other beaches can also be found, such as the small beach at Locmaria to the south-east and the Plage des sables Rouges at the far eastern end of the Ile-de-Groix.

The south-west coast is very different in character, with cliffs and craggy rocks instead of quiet beaches, and has perhaps the scenic highlight of the island, the Trou d'Enfer, a dramatic break in the cliffs with stunning views. Head towards the coast around the Port of Saint-Nicolas Port and around towards the Pointe de Pen-Men at the western end of the island for this and other great coastal scenery.

The most popular highlights on Ile-de-Groix are the town, beaches, coast path and countryside but there are also various other attractions of interest.

There is a small museum dedicated to the the island in Port-Tudy - the Ecomuseum of the Ile-de-Groix - which covers a wide span of history starting from prehistoric finds on the island and then looking at agriculture and fishing in particular. The highlight is the 1950s lifeboat which looks curiously like something from a children's picture book!

As you explore Ile-de-Groix you will also discover various monuments bearing tribute to the long history of the island including prehistoric dolmen, several small chapels, the lighthouse at Pen Men (only open to the public on Journées de Patrimoine) and several ancient washhouses and lavoirs. Individually these are perhaps not the most important monuments you have ever seen but they taken together they add interest and a sense of history to your visit.

Getting to Ile de Groix

Ferries to the island start from Lorient, and the crossing takes about 45 minutes. If you are lucky enough to be arriving here on your own boat, the pleasure port called Port Tudy is near the main town and has enough space for about 300 boats.

Map of Ile de Groix and places nearby

Visit near Ile de Groix with France This Way reviews