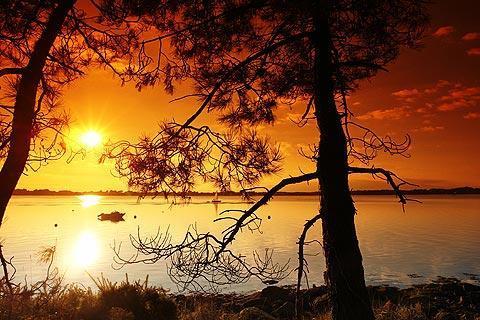 The Morbihan Gulf is an area of sea that extends 20 kilometres inland from the Bay of Quiberon, in the south of the Morbihan department of Brittany. The gulf is entered through an opening between two peninsulas to the west of the Gulf, with Locmariaquer towards the tip of the northern peninsula and Arzon on the southern peninsula.

It is interesting to know that the Morbihan Gulf is actually a very recent development, in geological terms, having been formed by falling sea levels about 3000 years ago. This event has given rise to numerous different natural environments here including oysterbeds, sand dunes, mud-flats and pine forests.

The towns and villages around the edges of the Morbihan Gulf are a popular destination with visitors and the bay itself contains numerous small islands, some of which can be visited, and is a haven for wildlife, especially birds.

Towns, villages and resorts on the Gulf of Morbihan

The most important towns around the coast of the Morbihan Gulf are Vannes to the north-east and Auray to the north-west.

Both towns are a few kilometres away from the gulf itself, but certainly should be visited during your stay - Vannes has an exceptional old town and is one of our favourite towns in Brittany while the port area at Auray - called Saint-Goustan - is also very picturesque.

On the edges of the gulf itself there are several small harbour towns and resorts. Among the most popular with visitors are the Locmariaquer peninsula, where you can see the the prehistoric megaliths of Locmariaquer, and including Cra'ch (to the north) and Saint-Philibert.

On the southern edge of the Morbihan Gulf the Rhuys peninsula leads to Port Navalo and Port de Crouesty, small ports at the tip of the peninsula next to Arzon where you can follow a coastal path with some lovely views.

Other places of interest around the Gulf of Morbihan include Saint-Gildas-de-Rhuys on the southern edge of this peninsula and Sarzeau towards the east.

No visit would be complete without taking a boat trip across the gulf or to visit at least one of the islands. The two largest islands in the Morbihan Gulf are the Ile d'Arz and the Ile aux Moines. Both of these islands are easy to reach by boat and can be visited and explored, and are very popular day trips with visitors - but they do get rather busy during the summer.

You can also see both of these islands from the mainland - one of the best views is from the promontory on the northern shores of the bay at Pointe d'Arradon.

The third island that can be reached by the public is the Ile de Gavrinis, a tiny island reached by boat from Larmor-Baden on the north-west coast of the Morbihan gulf. Despite its small size the Ile de Gavrinis is particularly interesting to visitors because of the Cairn de Gavrinis, certainly one of the most fascinating neolithic monuments in Brittany. The cairn is seven metres high and 50 metres across and contains an ancient tomb with numerous carved rocks, typically with swirly patterns and sunrays among the carvings.

As with one or two of the caves in the Dordogne where you can see the original prehistoric cave paintings, the carvings in the Cairn de Gavrinis succeed in reminding you that you really are walking in the exact footsteps of your ancestors: in our opinion a very special experience.

As well as visiting the islands, a boat trip is also the best way to appreciate the bay itself. During the trip you will see other islands that are now submerged, some spookily still with prehistoric monuments still half-visible. Boats to explore the Gulf of Morbihan depart from many of the towns around the gulf including Vannes, Port de Crouesty, Auray and Locmariaquer.

In truth there are no important beaches within the Morbihan Gulf itself. You can find a small beach at Locmariaquer but for family friendly swimming and beaches it is preferable to head to Carnac Plage or to the longer beaches of the Atlantic Coast further west.

Note that in certain places the character and appearance of the Morbihan Gulf is very different according to the tides, and some areas that are very picturesque at high tide can become large areas of mud flats at low tide.

Map of Morbihan gulf and places nearby

Visit near Morbihan gulf with France This Way reviews

The French version of this page is at Morbihan gulf (Francais)