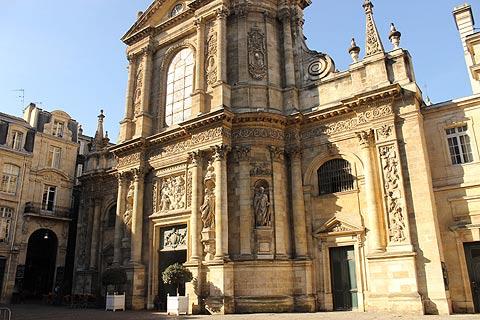 Guided tour of the highlights in Bordeaux old town

The following is a photo guide to Bordeaux's beautiful and historic centre.

Bordeaux is one of France’s most beautiful cities and one of our personal favourites.

Its historic centre boasts 1,810 hectares which are classed as a World Heritage Site. This area lies in a crescent along the left bank of the Garonne river.

A map of the centre can be picked up at the tourist office. From here head to the Place Comedie. 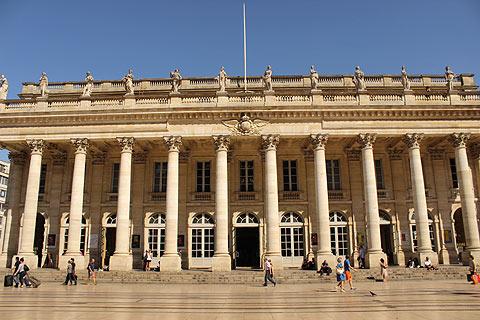 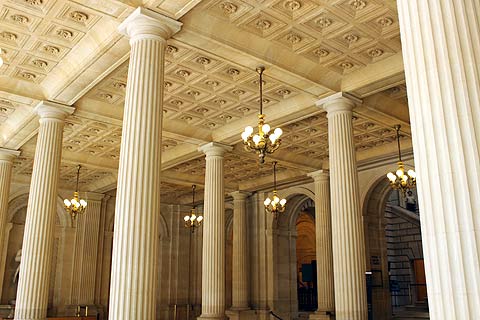 Here you can admire the stunning Grand Theatre, Bordeaux’s opera house. This was built in the late 18th century and has a neoclassical facade with 12 Corinthian columns topped by 12 statues representing the nine muses and the goddesses Juno, Minerva and Venus.

You can wander into the lobby for free and admire the stone staircase, doric columns and statues. To see inside the theatre itself you can either take a guided visit or go and see one of the many excellent performances put on by the theatre. 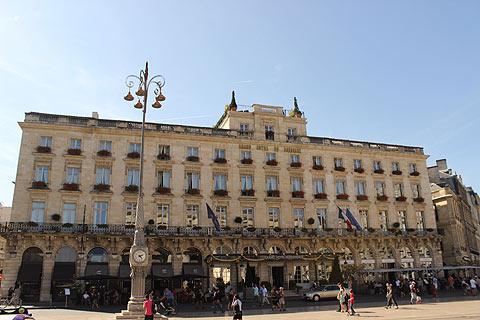 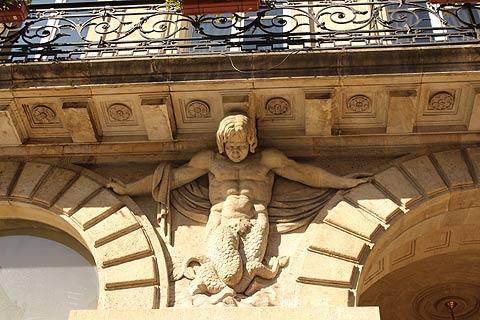 Opposite the theatre is the splendid Hotel Acquart, also called the Grand Hotel. Another magnificent neoclassical building. Take a look at the two statues holding up the elegant balcony on the side of the hotel. 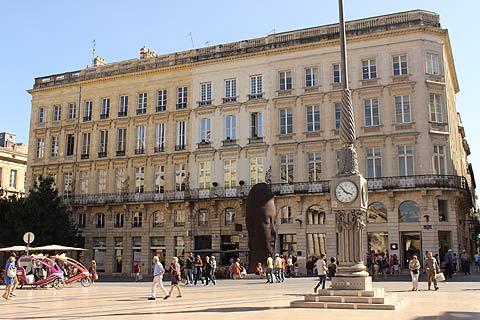 From the Place Comedie head down the Cours du Chapeau Rouge, a large classical boulevard which has recently received the addition of a huge bronze statue of a head by Jaume Plensa. Bordeaux is hoping to finance the permanent acquisition of this statue, currently on loan. 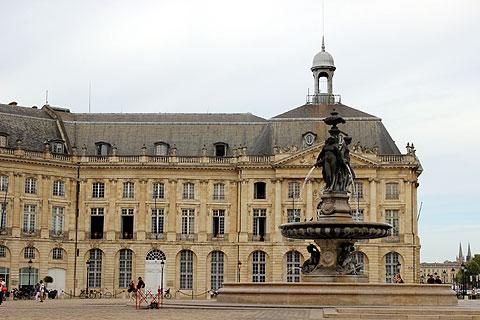 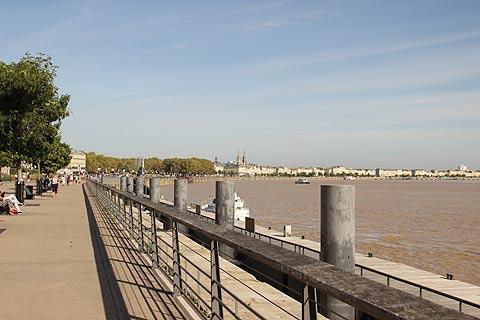 One of Bordeaux’s iconic sites is the glorious Place de la Bourse with its view over the river and the hugely popular ‘Miroir d’eau’ which was part of the very successful riverfront development project. The Place de la Bourse has at its centre the fountain of the three graces.

At one side is the Hotel des Fermes where goods arriving at the port were recorded. It is now a Customs and Excise Museum.

Opposite is the Palais de la Bourse, once an important trade centre. You can visit the Palace to see the interior covered courtyard, the “Golden Room” and the Grand Staircase.

Be sure to cross over to the river side to enjoy a view of the “golden crescent” in front of you. It is particularly recommended to see this first thing in the morning as the early morning sunlight lights up the buildings of the crescent. From here you can also enjoy a view of the “miroir d’eau’ and of the lively riverside walk along the quais of the river Garonne. 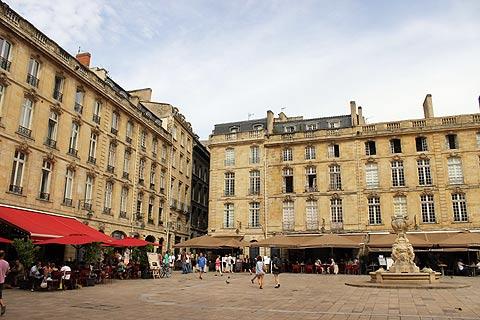 Away from the large classical boulevards and the river discover the narrow streets of a different and more intimate Bordeaux. These narrow streets are filled with interesting boutiques and small cafés. Head for the Place du Parlement, a lively square with a central fountain. This is a popular spot to stop for lunch or dinner and the square and streets surrounding the square are packed with welcoming restaurants.

Nearby the Place Saint Pierre is home to the Eglise St Pierre built in the 15th and 16th century. This area is home to some of the oldest buildings in central Bordeaux. 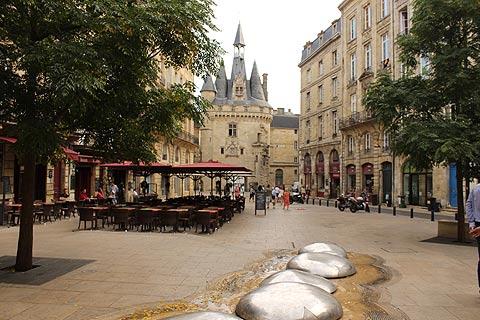 A short distance from here is one of Bordeaux’s most intriguing sights - the Porte Cailhau. This defensive gateway built in the 15-16th centuries resembles a small Disney castle with its spires and stone decorations. You can go inside to the first floor for free and for a small price go up to the second floor for views over the Place du Palais and a look at the inside of the spires. A very similar building is nearby on the Cours Victor Hugo.

This is the Grosse Cloche and this huge bell-tower has a similar Disney -like style. It was built earlier than the Porte Cailhau and dates back to the 13-15th centuries.Originally it was part of the town hall. Instead of the usual weather vane topped by a cock this one has a leopard - part of the Guyenne coat of arms of which Bordeaux was the capital. It also has an astronomical clock built in 1759. 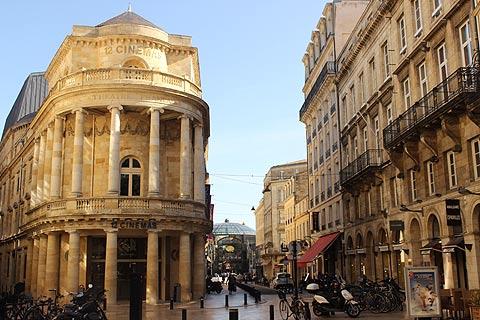 North of the cathedral and back close to the Grand Theatre is the interesting round glass 'Marcheé des Grands Hommes, an attractive indoor market and small shopping centre. In the rouds radiating out from here you can see both the charming Eglise Notre Dame and the attractive ancient theatre which is now a multi-screen cinema.

Be sure to sample some of Bordeaux's delicious specialities such as their colorfull macaroons - a favourite with our eldest daughter!! 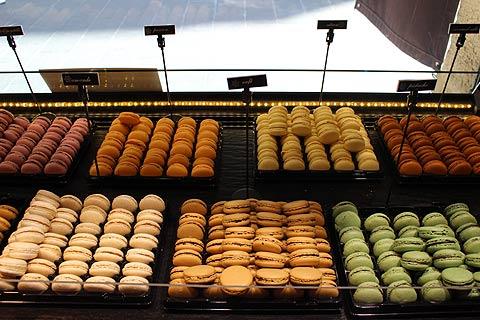 See also the main Bordeaux guide for other highlights in the town...