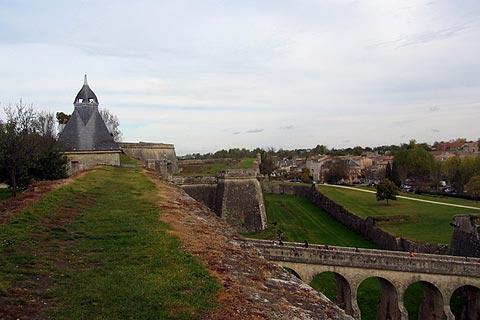 Situated on the eastern side of the Gironde estuary north of Bordeaux, Blaye is best known for its Citadel and for the red wine produced in the surrounding region. With 4,700 inhabitants, Blaye is a small town, but has a long history of military and strategic significance.

According to legend Blaye is the final resting place of the Count Roland of Blaye, nephew of Charlemagne and hero of Le Chanson de Roland. Unfortunately, the Basilique Saint-Romain where he was said to be buried suffered damage in the Wars of Religion and was later completely destroyed during the building of the Citadel.

Most visits to Blaye start with a visit to the citadel. The Citadel is a military complex designed by Sébastien Le Prestre de Vauban, the famous French military engineer, and was constructed between 1685 and 1689. Built with the goal of protecting Blaye, the Citadel, together with the Fort Paté and the Fort Médoc on the western side of the Gironde estuary, was able to control the flow of river traffic.

It is free to enter the Citadel and explore its village streets and ramparts, and this is the most interesting part of the town even if tourism is now a rather prominent part of a visit.

From the top of the Citadel, there is a good view of the estuary and the two forts. Within its walls, visitors can pay to take guided tours of the Abbaye Saint Romain or to enter or take a tour of the Musée d’Archéologie et d’Histoire de Blaye and the old prison in the same building. Tours are also available of the Citadel and its underground passageways and can be organised through Blaye Office de Tourisme.

In 2008, the Citadel of Blaye and the city walls were added to the list of UNESCO World Heritage Sites along with other fortifications designed by 17th century military engineer Vauban.

Also in Blaye you can see the ruins of the Château des Rudel, a 12th medieval century castle. It was mostly destroyed in the Wars of Religion by Calvinists, although there have been recent efforts to preserve what is left.

The region around Blaye is celebrated for Côtes de Blaye, the red wine made in the nearby vineyards along the eastern Gironde (the more famous wines of Medoc are made in the vineyards to the west of the estuary). To taste and discover these wines, visitors can go to the Maison du Vin on the Cours Vauban or to the Cellier des Vignerons in the Citadel. Each spring, the Printemps des Vins wine tasting and sale is held inside the Citadel of Blaye.

There is a market in the town every Wednesday and Saturday where visitors can buy local produce, including asparagus of Blayais. The soil in the Blaye region is particularly good for growing asparagus and the gourmet vegetable can be bought from March to May. Blaye’s pralines, fish from the Gironde, and fruit are also notable local products.

There are no trains to Blaye, but it is accessible by bus and by car. Once in Blaye it is easy to see all of the attractions on foot.

If you are here to explore the Cotes de Blaye wine region you will be interested to know that there is also a ferry across the Gironde estuary from Blaye to the village of Lamarque, which is between Pauillac and Margaux in the heart of the Medoc wine region.

One of our favourite cities in France is Bordeaux, just a short journey south of Blaye and an unmissable part of your trip to the region. Villages that we recommend you visit include Saint-Emilion, one of the loveliest villages in France and now a UNESCO listed heritage site, and Talmont-sur-Gironde to the north with a lovely roman style church on a headland overlooking the estuary.

Map of Blaye and places nearby

Visit near Blaye with France This Way reviews

Plan your visit to Blaye, Gironde

Regular market(s) are held in Blaye each Wednesday & Saturday. (Markets are held in the morning unless stated.)

The French version of this page is at Blaye (Francais)