Beauport Abbey near Paimpol in northern Brittany, is a beautiful abbey which has been made even more attractive by the thoughtful planting of various gardens in and around the ruins of the abbey.

The Abbey sits on the edge of the Bay of Paimpol just a few kilometers from the harbour town of Paimpol.

Explore the gardens of Beauport Abbey

France This Way comment: The evocative ruins of Beauport Abbey on the edge of the sea and surrounded by pretty gardens provide a charming interlude from the beaches and resorts along the coast. 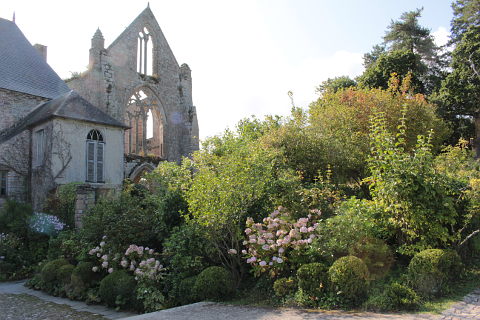 Paimpol Abbey was created in 1202 by the Prémonté Order. It was a monastery for six centuries until its dissolution during the French Revolution. It then was used for various different purposes including  a school house and gradually fell to ruin.

In 1992 the abbey and its lands was purchased by the 'Conservatoire du littoral', a coastal conservation group who have carrried out work to preserve both the buildings and the fauna and flora of the property.

As part of this work they have established a beautiful garden in and around the ruins which provides a charming setting for the majestic buildings. From various points around the abbey views extent over the abbey and its gardens and over the Bay of Paimpol and the Isle of Riom too.

At the approach to the abbey the borders almost have an English-garden style with deep borders full of shrubs including some beautiful, large pink hydrangeas and lots of clipped box balls. Herbaceous planting provides a succesion of flowers and in the autumn includes large clumps of pink Japanese anenomes.

Hydrangeas do thrive in the warm wet climate of Brittany and they are used successfully throught the abbey gardens and look particularly stunning inside the main body of the abbey church where they have been planted at the foot of the large Gothic arches.

Inside the cloister the calm atmosphere that would have prevailed here has been kept with a green colour palette provided mostly by ferns and clipped hedges. A small parterre on one corner of the abbey has been planted with large fuschia shrubs as well as agapanthus and geraniums and elsewhere a small herb garden has been created.

An orchard was planted in the abbey grounds in the Middle Ages and a formal French-style garden created during restoration work in the 17th century. This basic plan has been kept and squares of grass and lines of apple trees along with a central alleyway maintain this basic structure in the orchard garden.

To preserve the ancient apple varieties growing at Beauport Abbey an orchard conservatory has been created. There are 60 different varieties of apple in the orchard, 80% of which are specific to Beauport!

An artisan apple juice and cider production now takes place using the Beauport apples. Be sure to buy a bottle or two from the abbey's shop.

For more information about the abbey see our Beauport Abbey guide. 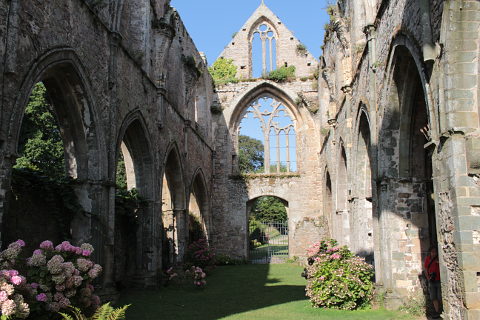 The nearby port of Paimpol and its historic centre are attractive and it has an excellent market on a Tuesday morning.

The nearby Ile de Brehat is known for its profusion of flowers and so enthusiasts of gardens in France will want to visit. The port of Ploubazlanec just outside of Paimpol has a ferry crossing to the island.

You can find more travel ideas in the Brittany guide.

Map of Beauport Abbey Gardens and places nearby

Visit near Beauport Abbey Gardens with France This Way reviews