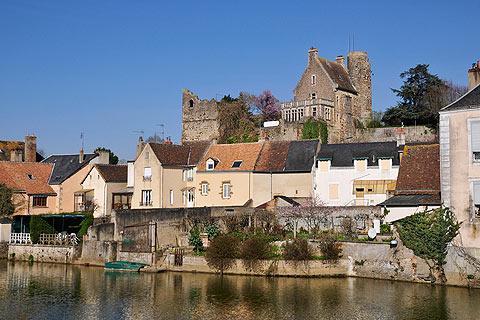 Beaumont-sur-Sarthe is a small town on the Sarthe river between Le Mans to the south and Alencon to the north (each of these towns is about 25 kilometres from here). The pretty market town of Fresnay-sur-Sarthe is 10 kilometres north-west of Beaumont.

Most visits to the region will be concentrated in the surrounding countryside, but Beaumont-sur-Sarthe itself also has a long and illustrious past which is still reflected in several buildings of interest and the town merits a visit. We suggest you start your visit by parking in the car park at Place Dufour, on the northern edge of the town centre.

A notable site of interest in the centre of Beaumont-sur-Sarthe is the Church of Notre-Dame. Although the church has its origins in the 11th century it has been much modified over the centuries - take a look at the stonework of the original roman style entrance to the church for one of the oldest parts. 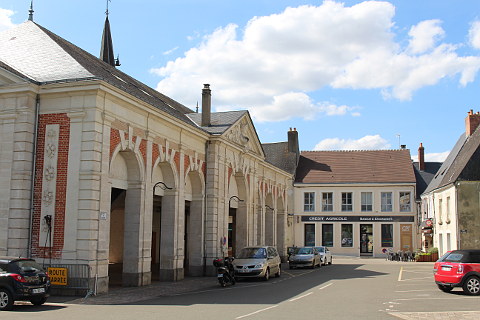 In the centre of the town you can also see the imposing 19th century market hall, built in the classical style of brick and white rock to replace the earlier wooden halls that had burned down.

A walk around Beaumont-sur-Sarthe reveals several interesting buildings such as the presbytery and the house where the 20th century painter Georges Rouault lived.

However the highlight of the town is the view of the river. Head to the roman style bridge across the river in the centre of Beaumont-sur-Sarthe and from here you have attractive views along the river, across the town, and to the watermill close by. You can also see various 'lavoirs' the ancient wash-houses along the river.

From the bridge you can then follow the road north that takes you straight back into the oldest part of the town, via one of the original entry gates. Another important monument is the castle, the ruins of which overlook the town and river from behind the mill and which dates from the 12th century. The castle is not open to the public.

After exploring the town you can take a stroll through the woods next to Rue de la Motte, towards the north-east of the town at the end of Rue des Promenades. This small hill, la Motte, offers a panoramic view over the river.

Whilst Beaumont-sur-Sarthe has some highlights the town did seem to be in a state of general decline when we visited with many shops closing and buildings looking a bit rundown. Hopefully this will be reversed in the near future! 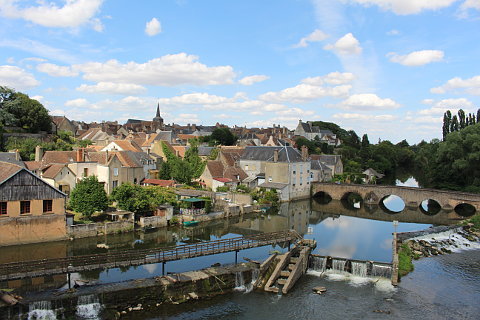 Vivoin and other local attractions

At Vivoin, a short distance north-east of Beaumont-sur-Sarthe and officially listed as a small city of 'character', you can visit the priory and roman style church of Saint Hippolyte. Although much of the original priory, dating from the 11th century, has now disappeared you can still see some remains of the cloisters and parts of some early medieval frescoes, as well as a small museum dedicated to life in the region during history ("Le Musée de la vie d’autrefois").

Also at Vivoin we enjoyed a stroll around the 'textile garden' which shows many species of plant used historically within the textile industry.

Saint-Marceau is another small village close by that also features a traditional church and priory in an attractive setting.

The surrounding countryside attracts many visitors and there are various trails laid out for your benefit both along the Sarthe river and through the woods and fields - ask at the tourist office for details. One of the most popular trails follows the four kilometre route of a disused train line between Ségrie (a few kilometres west of Beaumont-sur-Sarthe) and Saint-Christophe-du-Jambet and features various interesting information panels along the route.

Saint-Ceneri-le-Gerei is a beautiful village and home to the lovely gardens, Les Jardins de la Mansoniere. These are close enough and nice enough that you will not want to miss them.

Map of Beaumont-sur-Sarthe and places nearby

Visit near Beaumont-sur-Sarthe with France This Way reviews

Plan your visit to Beaumont-sur-Sarthe, Sarthe

Regular market(s) are held in Beaumont-sur-Sarthe each Tuesday. (Markets are held in the morning unless stated.)