Beaugency is a quiet town located in the 'Valley of the Kings', on the Loire River between Blois and Orleans in the Loiret department.

The most important event in the turbulent history of the town was the Battle of Beaugency, a series of battles led by Joan of Arc in 1429 in which the region was recaptured from the English. The tower in the town - Tour Cesar - dates from the 11th century and played an important role in the battle. This was an important victory because at that time Beaugency controlled the only river crossing in the region.

A second Battle of Beaugency took place during the Prussian invasion of France in 1870, when much of the French army was defeated near the town.

France This Way comment: the long history of Beaugency means there are several interesting historical monuments to be seen as well as various other places of interest and is a very pleasant town to explore. 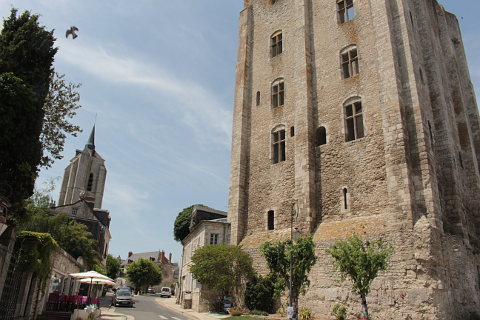 Start your visit with a stroll along the river front near the long bridge (it has 26 stone arches) to the east of the town centre. Although it is in the same position as the original 14th century bridge, it has been rebuilt and modified several times over the course of the centuries. Originally the wealth of Beaugency developed around the bridge, because the town charged a toll to those who crossed the river here, overseen by the Caesar Tower.

The Caesar Tower is a large square tower dating from the 11th century and is interesting because it is one of the oldest examples of roman style military defences in existence. It became part of a castle built in the 16th century, but the rest of the castle was destroyed at the time of the Wars of Religion. Near the castle tower you will also see a statue of Joan of Arc, commemorating the role she played in the historical battles.

On the site of the medieval castle you can now see the Dunois Castle, a grand townhouse subsequently converted to the renaissance style. Another impressive renaissance building in Beaugency is the the 16th century town hall, with its ornately decorated facade. Inside the town hall there is an impressive collection of eight wall hangings. The town hall sits on a beautiful, peaceful little square.

Other early medieval houses in Beaugency include the Maison des Templiers, a very ancient house dating from the 12th century and also with an unusual facade incorporating several blind arches and a 15th century half-timbered house. The medieval sights in Beaugency also include the small but very lovely Church of Saint-Etienne, a very good example of 12th century roman style church architecture that is now used for art exhibitions.

The Abbey of Notre-Dame at Beaugency is also more than 800 years old: it was here that the marriage of Eleanor of Aquitaine to King Louis VII was annulled, enabling here to marry the English King Henry Plantagenet. Although a substantial amount of the building was altered in the 17th century parts of the original remain, such as the round chevet and chapels and the carved capital stones. Inside, take a look at the altarpiece beneath the organ, an ornate woodcarving by Goyers of Brussels showing the birth and baptism of Christ. The stained glass windows are also very pretty and allow shafts of coloured light to illuminate the abbey.

There was a third church here in the 12th century, the Church of Saint-Firmin. You will see the belltower, although the rest of the church is no longer standing. A market hall was built on the site of the original church in the 19th century. Two other medieval towers still exist in Beaugency that were originally part of the town defences - these are the square clocktower and the round 'Tour du Diable'. 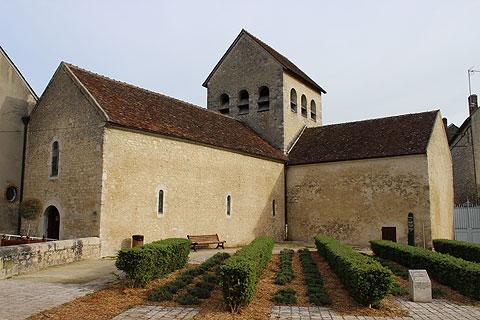 After exploring the region around the historical monuments, complete your visit with a stroll around the streets in the historical port area of the town to see the small traditional houses in the region that was once the thriving centre of Beaugency. Our favourite street here (we forgot to write down the name but it could be Rue du Ravelin!) has a small stream running down the middle of the road, and a good number of plants and flowers, and is very pretty.

To the north-east of Beaugency you can visit the impressive city centre of Orleans and see the cathedral of Sainte-Croix, and to the south-west you quickly reach the first of the Loire Valley castles such as the enormous Chateau de Chambord and the lovely historic town of Blois.

Map of Beaugency and places nearby

Visit near Beaugency with France This Way reviews

Beaugency is classified as a recommended detour town (plus beau detour)

Plan your visit to Beaugency, Loiret

Regular market(s) are held in Beaugency each Saturday all day. (Markets are held in the morning unless stated.)

The French version of this page is at Beaugency (Francais)