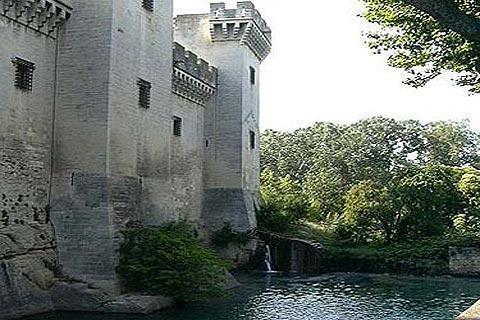 Beaucaire is a pleasant town in a nice setting on the river bank at the eastern edge of the Gard department, to the east of Nimes. The town is closely linked to Tarascon, which is likely to be visited at the same time, and is just across the Rhone River from Beaucaire (in the Provence region).

Although the main advantage of Beaucaire for visitors is its great location between and close to the towns of Arles, Nimes and Avignon, and its setting between the Rhone River and the Canal du Rhone a Sete, be sure to investigate the town itself when you are in the region 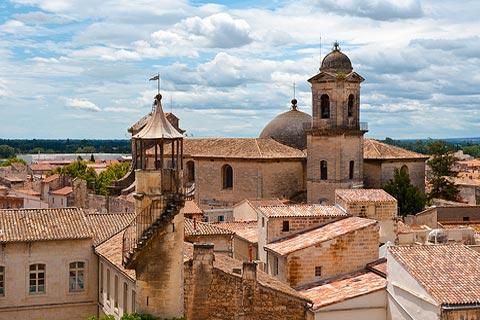 The main feature that you will see on the river is the castle at Tarascon. Beaucaire itself also has an impressive ruined castle standing above the town, with an unusual triangular donjon. The castle is also the location for a popular display of birds of prey known as 'Les Aigles de Beaucaire'.

The town also has a port on the Sete-Rhone canal, which acts as the centre of the town. Here you can stroll along the waterfront as well as organise boat trips or hire boats to explore along the canal.

Apart from the castle and the port, other places of interest in the town include the baroque style Church of Notre-Dame des Pommiers, built in the 18th century, and the Church of Saint-Paul, best known for its unusually decorated spire.

France This Way comment: some of the monuments are a little hidden in side streets so we suggest start your visit at Beaucaire tourist office on Cours Gambetta, where you can get a map highlighting each place of interest.

Note: a major event in the life of Beaucaire is the celebrations that take place in the second half of June to celebrate the dragon called 'drac' who, it is said, lived in the river 800 years ago and very frequently emerged to eat people. Unfortunately for those concerned the dragon was invisible, which made him rather hard to stop...

Another festival is held towards the end of July, which includes bulls charging through the streets and everyone having a good time! 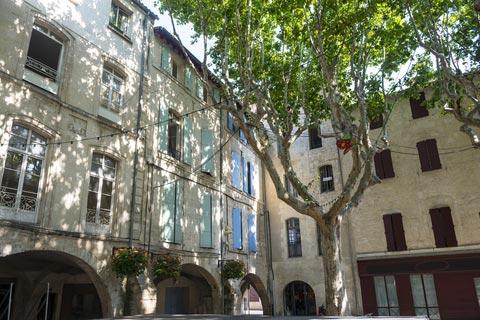 Places to visit near Beaucaire

You will certainly want to visit the important historic towns of Arles, Avignon and Nimes while you are here, and there are some other interesting sites to visit close to Beaucaire. These include:

- the Abbey of Saint-Roman, just outside the town, is a fine troglodyte abbey. The abbey was carved out of the soft rock by monks in the 5th century. Several rooms including the chapel can be visited and this unique abbey is on a hill and has lovely views out across Provence.

- at the Mas des Tourelles (take the St Gilles road from Beaucaire) there is an interesting recreation of a roman vineyard, garden and wine cellar where you can also taste 'almost authentic 2000 year old wine'.

Map of Beaucaire and places nearby

Visit near Beaucaire with France This Way reviews

Plan your visit to Beaucaire, Gard

Regular market(s) are held in Beaucaire each Thursday & Sunday. (Markets are held in the morning unless stated.)

The French version of this page is at Beaucaire (Francais)