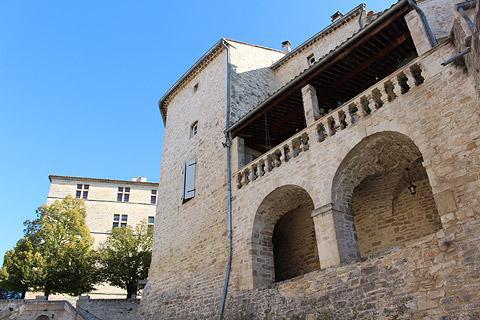 The town of Barjac is in the northern part of the Gard department in Languedoc-Roussillon. It has a historic centre with several monuments of interest to discover.

France This Way comment: the centre of Barjac is quite small and the historic monuments are quite minor but all the same it is a pleasant town to visit when you are exploring this lovely region.

You can start your visit at the Barjac Tourist Office, in the large square that occupies most of the southern part of the town centre. This square is pleasant with shops and cafes along one edge and overlooking a public garden, a large shady area of grass and trees with a fountain and where you can also find the tourist office. 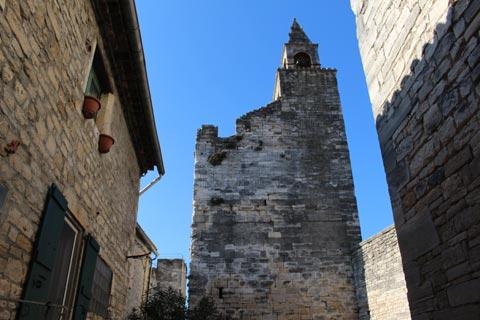 The historic centre, still surrounded in part by its 14th century defensive walls, is in the streets to the north of the Tourist Office. Most of the pleasure comes from simply strolling along these roads and the centre is small enough that you will come across most of the historic monuments along the way.

Although the defensive parts of the walls such as the towers were destroyed at the beginning of the 17th century, the walls themselves were allowed to remain as part of the town's defences against an equally dangerous menace: the Black Death that plagued much of Europe at that time.

Most of the highlights have quite detailed information boards, with a summary also in English, which I always think help bring a town to life and make it more interesting to explore. They also tell you when you are next to an important monument that you would otherwise not have noticed!

Almost in the centre of the town you can see the most important historic monument, which is the remains of a 13th century castle keep (donjon). The belltower was added in the middle of the 17th century. In the courtyard you can see a small stage and seating: apparently a well known music festival is held here each year, but it was quiet when we visited!

Very close to here you can see the Place de la Renaissance. As well as being the centre of markets in Barjac since ancient times, you can also see our favourite building in the town which is a most unusual and elegant townhouse that includes a round tower.

To the west of the centre around the Place du Château you can see a stone entrance through the towns medieval defences called the Porte Basse. This gate was actually rebuilt in 1679 and is not one of the original entrances which I imagine looked a lot more sturdy than the current version!

On the same square there is also an imposing double staircase with a fountain. The stairs lead from the lower level up to the base of the castle and was built in the middle of the 19th century to allow people to more easily reach the fairs that were held around the castle.

If you have been exploring the Gard department you might be expecting a ruined medieval castle but in fact the main castle in Barjac is much more recent having been built in the 17th century. It is quite a large but plain building with stone surrounds around the regularly placed windows being the main features of interest. The castle is now used as Barjac Town Hall. 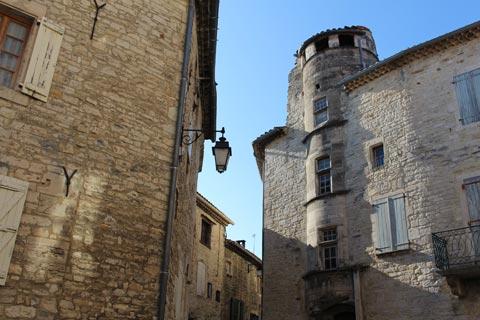 Continuing north through the centre of Barjac you will come across the Church of Saint-Laurent. This church was built in the 17th century on the site of an earlier chapel, then expanded in the 19th century. The well that is now to the front of the church was inside the chapel that originally stood here.

The northern Gard and southern Ardeche is one of our favourite regions of France with numerous ancient villages and sites of natural beauty to be explored. You will find three villages classed among the 'most beautiful villages in France' close to here at Aiguèze, Montclus and La Roque-sur-Cèze and others that are classed, like Barjac, among the Gard Villages of Character.

Among the natural highlights there are several caves open to the public near Barjac as well as other sights such as the Gorges de l'Ardeche, the Pont d'Arc and the Cascades du Sautadet - and the landscape all around you as you explore is also often very beautiful!

Map of Barjac and places nearby

Visit near Barjac with France This Way reviews

Plan your visit to Barjac, Gard

Regular market(s) are held in Barjac each Friday. (Markets are held in the morning unless stated.)

The French version of this page is at Barjac (Francais)