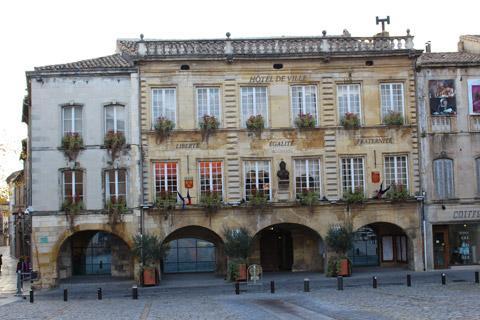 Bagnols-sur-Ceze is the principal town in the Ceze valley in the northern Gard department of Languedoc-Roussillon.

France This Way comment: we were quite disappointed when we visited Bagnols-sur-Cèze: because there are so many lovely towns and villages in the region we had high expectations but as a town to visit as a tourist we found the monuments of interest rather lost in the surrounding sprawl...but we appreciate that not everywhere has an industry based on tourism, and there are still some notable sights to be seen!

Although Bagnols-sur-Cèze is not primarily a tourist town there are a couple of points of interest in and around the town centre and a popular museum of art. 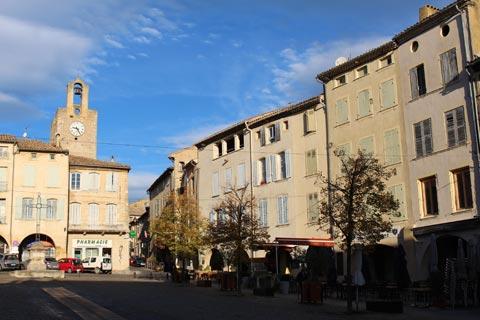 The main highlight in the town, and the place you will start your visit, is the large central square, originally called the Place du Marché and now Place Mallet. The Town Hall was built in 1675 and dominates one end of the square and there are arcades along two sides, as well as various cafes. The cross in the square dates from the 18th century.

A short distance up the hill from the Place Mallet there is a medieval clocktower, built in the early 15th century for Philippe le Bel.

As you explore the ancient streets around the centre of Bagnols-sur-Cèze you will come across the Church of Saint-John the Baptist, although the church entrance is on quite a neglected street. This church dates in part from the 11th century although much of the church has been modified and rebuilt since and the spire was added in the 17th century. The most interesting feature of the church is the entrance with four ionic columns, and inside there is a large raised stone balcony quite typical of churches in the region.

Upstairs in the Town Hall you can visit the Museum of Albert-André, which has quite a large collection of paintings and lithographs. These are mostly by 19th century French artists including minor works by Renoir, Matisse, Cézanne and Pierre Bonnard and most are in the modern style that was emerging at that time, with some quite interesting works. Entrance to themuseum is free.

A second museum here is the Archaeology Museum on avenue Paul Langevin which has artefacts from the Iron Age to Roman times that have been discovered in the region around Bagnols-sur-Cèze.

Elsewhere in the town you can see several other minor historic remnants such as a lavoir, parts of the ramparts and ornate stone doorways: ask in the Tourist Office for a map that highlights these. There is also a long shopping street called the Rue de la Republique that starts at the top end of Place Mallet.

You should also walk along the Rue Fernand Crémieux at the bottom of Place Mallet. As well as various imposing townhouses this street has several old shopfronts now painted to look like the shops and cafes of the olden days: a very good idea for bringing life into a street that I think other towns should copy! You will see more of these trompe l'oeil paintings in various other places in the centre of Bagnols-sur-Cèze. 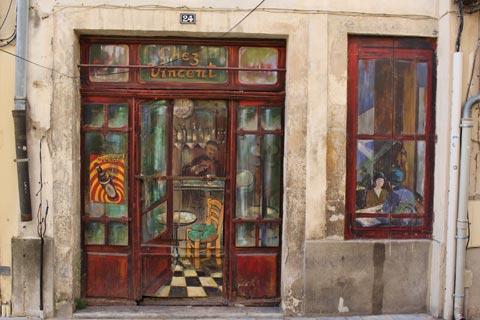 There are numerous villages and natural highlights of interest in the general vicinity of Bagnols-sur-Cèze. Those that we recommend very close to the town include the small villages of Saint-Laurent-des-Arbres and Saint-Victor-la-Coste, and the lovely village of La Roque-sur-Céze with the Cascades du Sautadet.

As well as exploring the villages we also recommend you take a trip to see the many places of interest in the centre of Uzès, the ancient capital of the region.

Map of Bagnols-sur-Ceze and places nearby

Visit near Bagnols-sur-Ceze with France This Way reviews

Plan your visit to Bagnols-sur-Ceze, Gard

Regular market(s) are held in Bagnols-sur-Ceze each Wednesday. (Markets are held in the morning unless stated.)