France This Way comment: although it is true that Azay-le-Rideau would attract few visitors if the castle was not here, it contains several sites of interest and a pedestrian area with cafes and shops and is a nice place to pass an hour after visiting the castle.

When you arrive you will see parking available in the centre of the village in the Place de la Republique, but quite probably that will be full and you will need to park in the visitor car park about 300 metres east of the village. 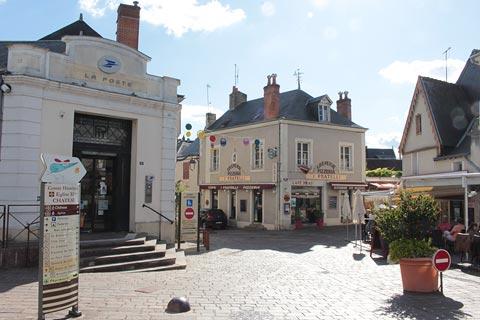 The Azay-le-Rideau tourist office is rather hidden in a small square a short distance west of the Place de la Republique, and should be your first destination because they have a useful leaflet with a 'Walk of Discovery' through Azay-le-Rideau: except for the castle and the church many of the places of interest are rather hidden down small streets and you will probably not discover them without this map!

The Chateau of Azay-le-Rideau is one of the most visited castles in the Loire valley, and in the centre of the village on the Indre river. It is a very beautiful renaissance style chateau in a lovely location surrrounded on three sides by water.

The castle was built in the 16th century incorporating French, Italian and Flemish influences and was further enhanced in the 17th and 19th centuries. Inside the castle you can see a few rooms furnished in the period style as well as a grand staircase. See Chateau Azay-le-Rideau for details of the castle and visitor information.

The original village developed in the 11th century around the castle and also a priory that was next to the castle.

It is useful to realise that a great deal of the historic centre of Azay-le-Rideau was destroyed in 1418 because the villagers were supporting the Burgundians, and was not a rich centre in the 16th century (unlike nearby Chinon) so the architecture in the village is more modest and often more recent than the well preserved historic centres you see in some historic villages.

The historic centre of Azay-le-Rideau is mostly along rue Balzac (the road between the castle and the Place de la Republique) and the adjacent roads such as Rue Gambetta, the Impasse Philippeaux, and Rue Rabelais. Another road with some interesting historic buildings is the Rue de l'Abreuvoir, to the west of the centre and with a watermill at the southern end and a mix of renaissance and 19th century buildings.

The most important historic monument in the village is the Church of Saint-Symphorien. This church is all that remains of the original priory around which Azay-le-Rideau developed and the small square in front of the church was where markets were held in medieval times. 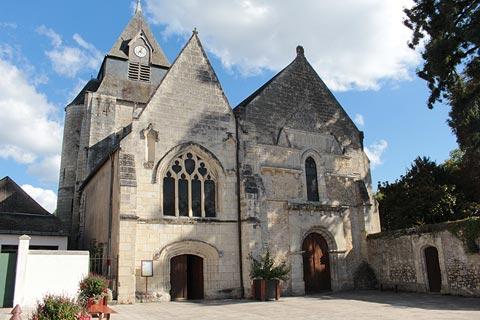 A few kilometres outside the village another castle on the Indre river is open to the public at l'Islette and shares many of the characteristics of the Chateau at Azay-le-Rideau.

Many of the most popular sights in the Loire valley are close to Azay-le-Rideau. Among our favourites nearby are the remarkable gardens at the Chateau de Villandry, the tiny village of Crissay-sur-Manse and both the town and castle at Chinon.

Map of Azay-le-Rideau and places nearby

Visit near Azay-le-Rideau with France This Way reviews

Plan your visit to Azay-le-Rideau, Indre-et-Loire

Regular market(s) are held in Azay-le-Rideau each Wednesday & Saturday. (Markets are held in the morning unless stated.)