Set in an impressive position on the 'Rocher des Domes' wich looks out over the Rhone River and the historic centre of Avignon, the Popes Palace s one of the most important historic monuments in Provence.

Explore the Popes Palace in Avignon

France This Way comment: although it is rather austere, the remarkable gothic style achitecture - which is unusual except in cathedrals and churches - and the grandeur of the Palais des Papes make a visit very interesting

History of the Popes Palace

For much of the 14th century Italy was ravaged by wars and by 1309 Rome had became a violent and unwelcoming city. One consequence of this was that it became impossible for the incumbent Pope - Pope Clement V - to remain in the city.

As a result, from 1309 to 1377 the Popes established the centre of the Catholic church in the town of Avignon in France, during which time seven different popes were in control of the church. By 1377 the situation in Italy had improved and the Pope was able to return to Rome.

It was early in this period, from 1335-1352, that Pope Benoit XII and Pope Clément VI built the largest gothic style palace and church in the world: it took only 18 years to build most of the enormous Popes Palace, although certain additions continued after this date. The scale of the building continues with the major rooms inside, several of which are enormous! 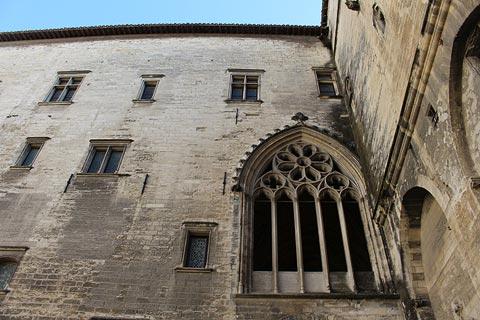 The wealth of the Catholic church meant that no expense was spared on the project, which has 15,000 sq. metres of floor area, and both the exterior and the interior decoration were lavishly decorated. In all likelihood there was no more impressive building in the western world at the time of its completion.

The influence of Avignon continued after this time, after the French cardinals objected to a new Italian Pope who was chosen in 1378, and they established an alternative pope in Avignon, Pope Clement VII who reigned until 1394 and was then succeeded by Pope Benedict XIII. These last two popes are referred to as the "Anti-Popes".

This major divide in the Catholic church was not resolved until 1403, so for almost all the 14th century Avignon was a major regional centre with a far-reaching influence.

By the 15th century the Popes Palace had became surplus to requirements, and was neglected and fell into disrepair. This decline continued for several centuries, with both neglect and vandalism contributing to the poor condition in which the Pope's palace found itself.

After the French revolution, like several French castles, the palace at Avignon was used as a military prison. From the start of the 20th century the fortunes of the palace have been reversed as the importance of the monument has been recognised and a great deal of time, effort and money spent on restoring the palace to its former glory.

Visiting the Popes Palace in Avignon

You enter the Popes Palace through the Porte des Champeaux, the main entrance in the middle of the front facade and below the two turrets (you will probably not notice, but these turrets are mostly a recent reconstruction, the originals having collapsed).

The palace is built around two courtyards: the Great Courtyard (La Cour d'Honneur) and the Small Courtyard. To the left (looking from in front of the building) is the Old Palace and to the right is the New Palace with the Great Chapel (upstairs) and the Great Audience Hall (downstairs).

Reaching the main courtyard, you are surrounded by the high walls of the palace buildings: take a look at the lovely stonework in the main arch window that overlooks the courtyard from the Great Chapel. The adjacent Small Courtyard is more welcoming, being much smaller and with grass in the centre.

Inside the buildings, although many of the rooms are rather austere, there is a great deal to enjoy when you visit the Palais des Papes: in total 25 rooms are open to visitors.

Apart from the rooms themselves with their soaring architecture, you will also see frescoes and wall coverings. In some of the smaller rooms such as the Popes Chamber and the Stag Room (Chambre du Cerf) the tiles and paintings are quite intact.

There are items of furniture, such as the Papal Throne in the Popes Room, although most of these are careful copies rather than the original furnishings. You will also see some of the tombs of the Popes and a grand staircase, and in some of the large rooms there are computer screen simulations to help visitors see how the interior would have been in the 14th century: short answer, much more colourful than it is today! 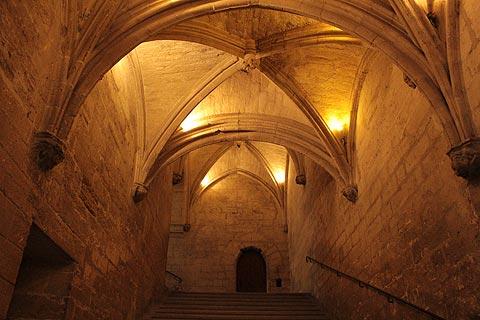 Major art exhibitions also take place quite regularly in the Popes Palace, which are very well suited to the large spaces available.

The building to the left of the Palais des Papes, surmounted by a golden madonna, is the Cathedral Notre-Dame des Doms. There has been a cathedral here since the 12th century, but much of what we see today is a later reconstruction. The statue of the madonna was added in the 19th century.

Another important relic from the time of the Popes stay in France is the ruined castle above the small village of Chateauneuf-du-Pape, a few kilometres to the north of Avignon.

See more castles in France. You can find more travel ideas in the Vaucluse guide and the Provence guide.

Map of Papal Palace, Avignon and places nearby

Visit near Papal Palace, Avignon with France This Way reviews

The French version of this page is at Papal Palace, Avignon (Francais)