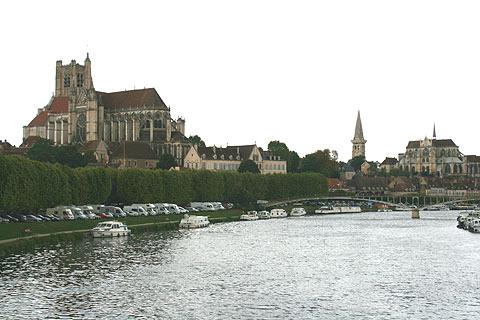 Auxerre is a town on the Yonne River and in the Yonne department of the Burgundy region. Historically, the town owes its importance to its important position on the river, and also to the once important trade route between the Mediterranean and the North Sea.

Auxerre has received the classification of a protected Historic Town in France as well as being one of the French 'villes d'art et histoire' towns (see French Towns of Art and History).

Auxerre is an interesting place to visit, with the town centre towered over by the cathedral and by several churches. The part of the town of most interest to visitors occupies the hill that runs up from the west bank of the river, and includes the major churches and the historical old town.

France This Way comment: although it has an impressive historic centre and several important religious buildings, it is true that some parts of the centre of Auxerre are rather neglected - although there was a lot of work going on when we last visited so all that might soon change! 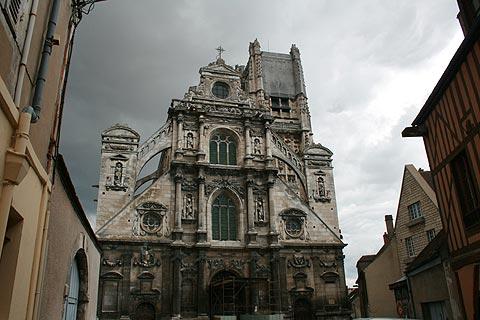 Before starting to explore ask for the map at Auxerre Tourist Office - they have a paid version which suggests a route to be followed and an 'under the counter' free version which also shows the highlights. The main Tourist Office in Auxerre is next to the river, although a smaller one can also be found near the clocktower.

The best way to get a perspective of the churches in Auxerre is by walking onto the main bridge across the river (the Pont Paul Bert). From here you have a very good view of the Auxerre 'skyline' (and is also the place where many photographs of Auxerre are taken). From here you can see three main churches - running south to north these are the Church of Saint Peter, the Saint Etienne Cathedral, and the Saint Germain Abbey.

The Cathedral Saint-Etienne is an imposing gothic style cathedral built and modified from the 11th to the 16th centuries. Take a look at the carvings around the doorway then pass inside the cathedral to see some of the best known stained glass windows in France, and the fascinating 11th century crypt where you can see remains of the earlier cathedral on the same site and a very ancient fresco.

The Abbey of Saint-Germain at Auxerre is also interesting, with the cloisters and other monastery buildings now open to the public, partly as a museum dedicated to the history of Auxerre and region. The abbey is renowned for the frescoes it contains in its crypt which date from the 9th century and are the oldest known church frescoes in France.

Although they dominate the skyline, Auxerre is much more than just crypts and churches - the town itself has a great deal to offer as you explore and much of the old historic centre of the town is now a region of protected development.

There are attractive squares where you can take a rest in a cafe, joined by narrow medieval streets and a myriad of attractive ancient houses, often with half-timbered facades. The parts of Auxerre around the town hall and the clock tower are the most interesting.

The highlight is the old town gateway in the heart of Auxerre Old Town, a 15th century clocktower where the ochre and gold coloured sundial and moondial can be seen. The tower is in the heart of the pedestrianised centre of Auxerre.

The rest of the old town should also be explored, especially in the section of town between the Town Hall and the Saint Etienne Cathedral, where you will discover various other interesting buildings. 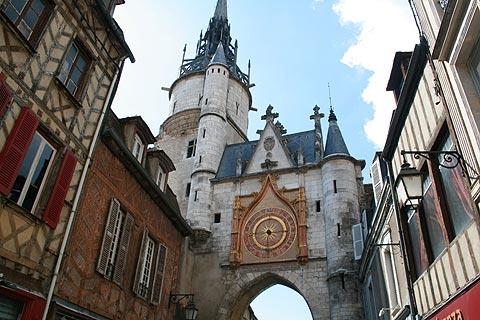 Other things to see and do in Auxerre

If you walk a little way along the river (the 'marine quarter' of the town), you have attractive views across the town and can see some of the many boats that stop here.

There are two museums in Auxerre that are of interest to visitors. One is the Museum Leblanc-Duvernoy featuring tapestries and furniture, while the other is the Natural History Museum.

Of the many parks and gardens in the town we recommend you visit the Arboretum Darnus-Rantheaume or the Parc de l'Arbre Sec, a botanic garden next to the river.

In the countryside to the north-east of Auxerre at Pontigny you can visit the largest cistercian abbey church in France.

We also enjoyed exploring the village of Chablis, in the Burgundy vineyards to the east of Auxerre.

Map of Auxerre and places nearby

Visit near Auxerre with France This Way reviews

Plan your visit to Auxerre, Yonne

Regular market(s) are held in Auxerre each Tuesday & Sunday & Friday. (Markets are held in the morning unless stated.)

The French version of this page is at Auxerre (Francais)