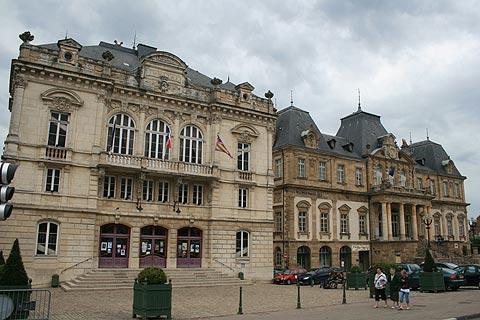 Autun is a town in the Saône-et-Loire department of Burgundy, to the north-west of Chalon-sur-Saone. The town was an active and lively centre even in Roman times, and it is still the Roman remains that are one of the big attractions.

Autun is listed as one of less than 100 important Historic Towns in France and is also classified among the official French Towns of Art and History.

A fairly small town, Autun still has the original fortified walls (ramparts) around the old town, is in an attractive setting with the Morvan Hills behind, and is one of the most visited towns in Burgundy. Start your visit with a look at the ramparts, which are well preserved and in places have attractive stone houses built above the walls.

Your visit can continue in the historical centre of Autun, near the cathedral. The Cathedral of Saint-Lazare is an attractive Roman style cathedral within the town walls, dating originally from the 12th century although signficant modifications were made in the following centuries, and the spire was added in the 16th century. 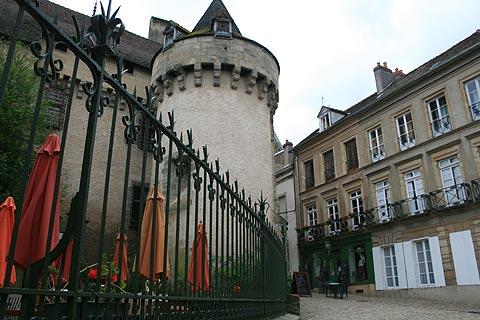 The cathedral is above all famed for its carvings and sculptures. Outside there are statues by Gislebertus, one of the best of the Romanesque sculptors - see the story of the Last Judgement in the tympanum above the west door for some of the best examples - while inside you can see some attractively carved capital stones. Next to the cathedral you can see the Saint-Lazaire fountain.

In the area around the cathedral there are some pedestrianised streets with bars and restaurants if you are looking for somewhere to eat. I can personally recommend the Chalet Bleu which did an excellent meal for a very reasonable price, which is on rue Jeannin behind Autun's theatre.

The centre of Autun is largely situated in the streets around the two large squares that are next to each other. One is dominated by Autun's Theatre and Town Hall and the other by the impressive Lycée buildings.

Be sure to also visit the 'Covered Passage', an ornate shopping arcade with a glass ceiling built in the 19th century. Another unexpected discovery in Autun is the old prison. Set on a circular plan, it was one of the first prisons in France to be built around individual 'prison cells'.

There are several Roman remains to be seen in and around Autun. These include two remaining gates that were part of the fortified walls: the Porte d'Arroux to the north and the Port Saint-Andre to the east. Both follow a similar design, with wider arches for carriages to pass through and narrow arches for pedestrians. The Port Saint-Andre is the best preserved and the most impressive of these two gates.

You can also see the Roman amphitheatre; and the Temple of Janus, although the remaining corner of the temple only hints at the grandeur of the original building. It is said that there were originally other temples nearby. The theatre was among the largest in the Roman empire and could seat up to 20 000 people.

Another interesting roman remain in Autun is the slightly curious pyramid Pierre de Couhard at the south of the town and outside the walls. 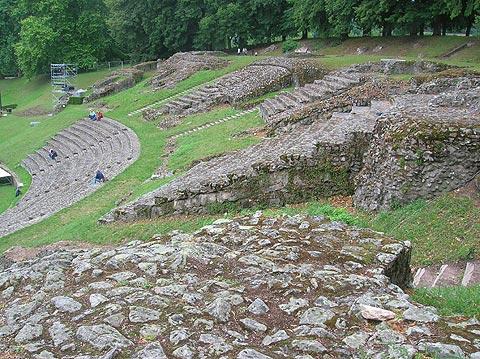 There are several museums in Autun, dedicated to such diverse subjects as Natural History; the children who played in bands that accompanied the French Army (the Musée des Anciens Enfants de Troupe); and the Musée Lapidaire that contains various architectural items from the medieval period, among others.

If you only have time to visit one museum, the Musée Rolin has an interesting collection of art and historical items including those by the well known medieval artists Gislebertus and the Maitre des Moulins. Among the highlights is a statue of the Mary-Magdalene, brought here from the Cathedral of Autun.

The most popular attraction close to Autun is at Bibracte. This was once the capital town of the gauls in France, and archaeological digs, reconstructions of buildings and a museum help to recreate the life of this important community.

Autun is also a gateway town for exploring the quiet countryside of the Morvan Natural Parc, to the west of the town.

Map of Autun and places nearby

Visit near Autun with France This Way reviews

Plan your visit to Autun, Saone-et-Loire

Regular market(s) are held in Autun each Wednesday & Friday. (Markets are held in the morning unless stated.)

The French version of this page is at Autun (Francais)