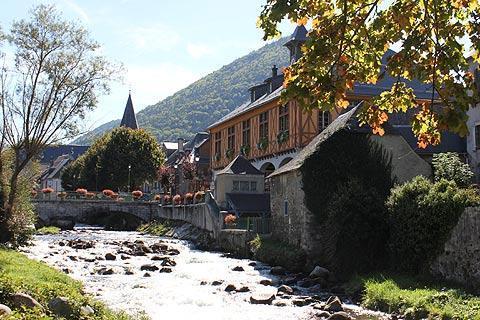 Arreau is a small town in the heart of the Pyrenees of southern France and at the eastern end of the Pyrenees National Park. The town is in a pretty riverside setting and there are several historical buildings of interest, all surrounded by the steep wooded hills of the Pyrenees.

First I should say that the Arreau Tourist Office was closed at the time of our visit and although I could see occasional signs indicating a 'route touristique' to follow the signs seemed to disappear or be hidden away for most of the time. No matter, the town is quite small and I think I discovered most of the highlights! 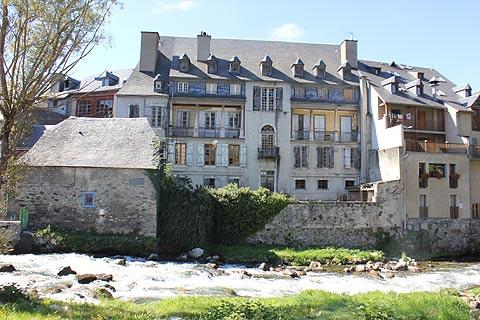 The Mairie - market hall is in the center of Arreau and easily recognised by the open market area at ground level (markets are held here each thursday) and the small clocktower on the roof. A pretty building but do note that the building was only built in 1932 on the site of the original 16th century market hall, and the colombage woodwork is fake!

Starting from here all the important historical sites in Arreau are close to hand, as is the riverside walk - the part of Anneau along the river is the most picturesque and interesting part of a visit.

France This Way comment: when out exploring it is quite rare to come across places that exceed my expectations - Arreau is one that most certainly did although I must admit I had never heard of the town until I was in the region and stopped on the off-chance that it would be worth a look around. In fact there is a great deal to see and enjoy here!

The notable monuments that you will discover as you explore include: 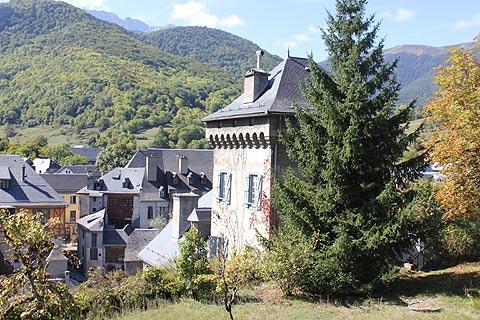 Return a little way up the hill and follow the steep lane on the left near the Chateau de Segure towards a calvary cross and with a nice view across the rooftops of the town below.

Although you will come across various small towns, villages and ski resorts in the Pyrenees it is without doubt the scenery and the chance to enjoy the outdoors that attracts most visitors here.

The highlights near Arreau in the Pyrenees National Park include the Col du Tourmalet, the mythical mountain route from the Tour de France, as well as various other popular cycling climbs such as the Col d'Aspin, so don't be surprised if you see groups of tired cyclists in the centre of Arreau!

Map of Arreau and places nearby

Visit near Arreau with France This Way reviews

Regular market(s) are held in Arreau each Thursday all day. (Markets are held in the morning unless stated.)

The French version of this page is at Arreau (Francais)