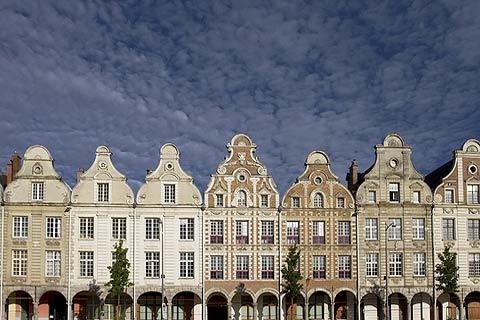 Arras is found to the south-west end of the Pas-de-Calais department and south-west of Lille in the Hauts-de-France region of northern France. Amiens and Paris are to the south of the town.It is an attractive city built on a deep bed of chalk and limestone that from medieval times onwards provided the building materials for the homes, workplaces, churches and public buildings in Arras.

The city initially avoided damage by the advancing German army in 1914, but when the British won the town back a bombardment followed that demolished the towering spires for which Arras was once famous and devastated some of the most beautiful Flemish-style squares and buildings in France.

The highlight of Arras is its old-town centre which has been carefully and attractively restored, mostly to the exact plan and design of the original town, following the very great damage suffered during the First World War. This has been so successful that Arras is now classified among the official French Towns of Art and History.

The best way to explore the centre of Arras is to follow the guided path indicated by 'nails' in the pavement, that passes all the major sites of interest.

There are two large open squares that dominate the town center. The larger of these is the Grand Place and the smaller is the Place des Heros. Both are surrounded by Dutch style (baroque) houses and mansions above arcades at street level, and have the attractive style and curved rooflines typical of the town, creating an attractive ensemble.

Altogether there are more than 150 of these baroque style houses around the central squares in Arras, including the house that originally acted as the inspiration for the design of the town centre at 47, Grand Place.

It is in the smaller of the two squares that you will find the Town Hall and the entrance to the belfry, which dominate the end of the square and are the architectural highlight in Arras.

The Town Hall and belfry were rebuilt after the First World War to exactly the same design as the earlier buildings (16th century) that had been destroyed during the fighting and the belfry is now of the belfries of France that has been designated as a World Heritage site. You will understand what a remarkable achievement it is when you see the decorative stonework of the facade and the three rows of mansard windows!

After ascending the belfry, and still in the town hall, you can descend into the subterranean world below with rooms and tunnels carved out of the ground below and learn about the history of the region. This remarkable achievement was much developed during the First World War when more than 20 000 soldiers occupied this underground world while preparing to launch the Battle of Arras.

The citadel in Arras dates from the 17th century, when the town was an important regional military centre. Reinforced by Vauban, the citadel is best explored by following the footpath that passes along the walls. A particularly poignant site is the "Mur des fusillées" where the nazis shot more than 200 members of the French resistance during World War Two.

Next to the fortifications you can also stroll through the large Jardin Minelle, a peaceful public park with a wide range of trees and plants based around a central lake. You will also discover several other large parks and gardens here, and as a result Arras is now listed as a 4* ville fleurie.

Important religious monuments in Arras include the cathedral and several churches. The 18th century cathedral was built on the site of an earlier cathedral which was is said to have been one of the architectural gems of France, but was unfortunately destroyed during the revolution. In neo-classical style, the interior of the cathedral is particularly interesting, taking inspiration from ancient temples.

Next to the cathedral, the Abbey Saint-Vaast was rebuilt in the 17th century and is a very substantial collection of religious buildings. The abbey is now home to the important Museum of Fine Arts in Arras, with its extensive range of paintings and other objects, including many works of art by Flemish and French artists.

More surprisingly, and also built as a consequence of the damage caused during the war, there are a good number of art deco style buildings in Arras. You will see these typical 1930's style facades in many of the streets around the town centre. 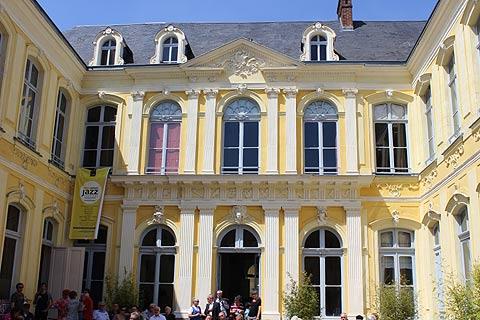 There is a poignant war cemetery and memorial towards the edge of the town. A fascinating insight into the lives of soldiers in Arras in the First World War is provided by the Carriere Wellington Museum which opened in 2008.

Further evidence of the First World War can be seen at Cambrai, east of Arras and site of the first ever tank battle, and at the war cemetery at memorial sites at Peronne, to the south of the town.

Map of Arras and places nearby

Visit near Arras with France This Way reviews

Plan your visit to Arras, Pas-de-Calais

Regular market(s) are held in Arras each Wednesday & Thursday & Sunday & Saturday. (Markets are held in the morning unless stated.)

The French version of this page is at Arras (Francais)