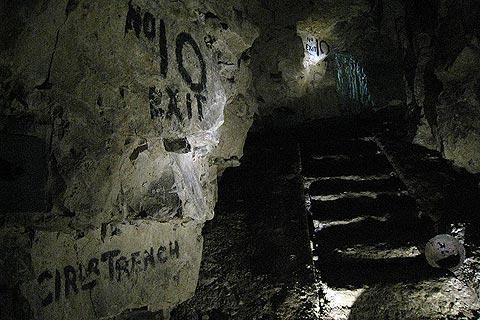 The scene is a museum in Arras, Northern France, the Carrière Wellington, which opened in early spring 2008. There can be few places that so accurately and vividly portray what it was really like in the First World War – the ‘war to end all wars’.

What makes Carrière Wellington different is that it is all about ‘real’ war: 90 per cent inactivity, 10 per cent sheer adrenaline and terror. Here it seems so easy to imagine the Tommies’ mindset and join them metaphorically – and sometimes physically – stumbling along, allowing a herd instinct to take over from individual actions. The museum is all about how the soldiers lived, breathed, ate, drank and carried out the most basic functions, just like normal human beings. And then they marched obediently up those deadly steps.

Two years later, still under British control but now a frontline hub for Allied forces from all over the British Empire, the relative safety of those limestone caves, quarries and connecting tunnels became a true refuge from the assault. With the cream of Britain’s miners and tunnellers already lying under Belgium and French soil, entrenched in the near-stalemate of the Somme after the battle began on July 1, 1916, or working flat out back home digging the coal for factories, the Army turned to New Zealand for help.

With skill, power and enthusiasm the Antipodeans set about turning the network of caves into a vast interconnected honeycomb of sleeping quarters and billets, tunnelled railways, latrines and officers’ messes. Defecation was a real and logistical problem. Waste could not be left underground – it had to be carried in buckets up to the surface. And woe betide the man who let a bucket slip!

So life carried on as normally as possible. A steady 11C temperature meant that the caves were constantly chilly but at least the men were sheltered from the howling winter storms above. Washing was possible, but difficult. Water collected in natural ‘baths’ or basins, and the soldiers used these for a full wash – but it was often better to be fourth or fifth into the bath when the water was not quite so cold.

The plan was a masterstroke: at a specific time the Allies would emerge from a hole in the ground, completely surprise the dug-in German army and march on to victory. The reality was not quite so simple. Just two weeks before the planned attack the Germans pulled back, leaving the emerging Allies exposed in No Man’s Land. But it was too late to make big changes, so the 25,000 troops who had lived underground for months on end marched out of the chalk caves at 05.30 on April 9 1917, with snow turning quickly to mud, to be met by sniper fire and machine guns.

Incredibly, the plan worked. In just two days the Allies overran two German lines and achieved their objective – until the Germans rested, brought in reserves and attacked again. Nevertheless, the Arras attack was the beginning of the end. German forces rallied but on November 7, 1918, the politicians were driven to surrender at La Pierre d’Haudroy and boarded a train for the armistice signing at Compiegne.

This haunting museum is a tribute to all who marched up those steps. There are few artefacts – the tunnels were cleaned out during the Second World War – and the audiovisual presentations are low key enough not to over-dramatise.

Carrière Wellington Museum is only a day trip away from southern England, so catch it now before the moneymakers realise that they can turn it into a tourist spectacle. So far, no overpriced café, ice cream booth or ‘made in China’ toy soldiers compete for your cash.

Map of Arras Carriere Wellington and places nearby

Visit near Arras Carriere Wellington with France This Way reviews