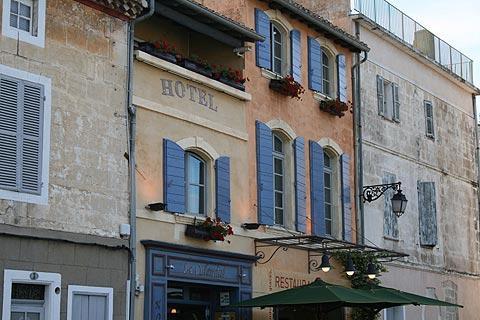 Arles is a town situated in south-west Provence and to the north-east of the Camargue region. Arles is most famous for two things, its Roman ruins and its association with Van Gogh, but while both play a large role in attracting tourists to the town it would still be worth visiting even without either of these 'highlights'.

Although there are numerous places to visit in Arles the main star is the town itself. Open squares with bustling cafes linked by narrow streets lined with attractive houses and shops, many looking old and faded and all the more romantic as a result.

The centre of Arles is quite compact and easy to explore. In our guide below we first visit the Roman ruins, then the medieval town and then more recent highlights, but in reality these are all quite intermingled.

Arles is one of the French 'secteur sauvegardé' towns (see Historic towns of France) and is also listed as a Town of Art and History in France. 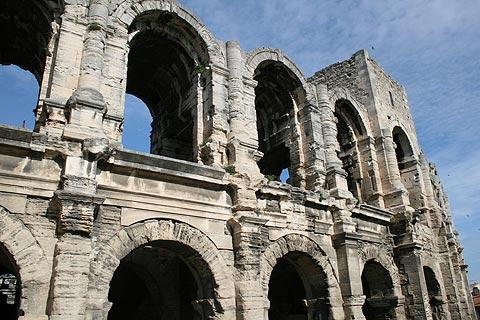 Start your exploration of Roman Arles at the amphitheatre which is partly restored. The amphitheatre is a large and substantially intact round structure once used for gladiatorial competitions, with enough remaining of the original building to give you a good impression of what it would have been like 2000 years ago, sitting on the benches and watching the gladiatorial battles.

The other important Roman ruins at Arles include the Roman theatre, the necropolis (Alyscamps with an evocative walk past sarcophagi to a small dark church) and the thermae of Constantine (Constantine baths) at the northern edge of the town. Each of these is individually interesting but there is much less to see than at the amphitheatre, although the theatre is quite substantial and has sufficient remains to give a good feel for the original building which could seat up to 10 000 spectators.

Further Roman sarcophagi can be found at the excellent Museum of Arles and Provence, along with many other interesting historical artefacts including a unique 2000 year old Roman barge, mosaics and busts. The museum is very well organised with lots to see and is one of our favourite museums in southern France.

You can see one of our personal favourites among the Roman artefacts in Arles in the Place du Forum. This square was the heart of the city in Roman times and is now surrounded by impressive but more recent buildings. All that now remains in the Place du Forum from the Roman era is part of an entrance gate set on two columns and now incorporated into the wall of the Hotel du Forum.

Moving forward to medieval times, walk now to the Place de la Republique to see the Church of Saint Trophime. This Romanesque style church is famous above all for its ornately carved doorway depicting the Final Judgement, and further romanesque details inside. After looking in the church, take a look in the attractive 17th century town hall just across the square from the church to see the stairway and statue.

Adjacent to Saint Trophime is the entrance to the 12th-14th century cloisters of the church. Unlike the church you pay to enter these cloisters but they have been recently renovated and the architecture is very lovely to see, including both romanesque and gothic elements. You can also go on the parapet that overlooks the cloisters as well as see some historic tapestries so a visit is recommended to anyone who appreciates historic architecture. 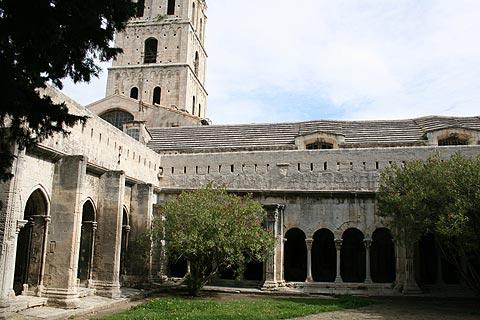 Van Gogh and other sights in Arles

There are lots of other sights that you will come across as you explore the town including churches, an obelisk and some fountains, for example, as well as several sites with links to the time Van Gogh spent in Arles so we do recommend you visit the Arles tourist office on Boulevard des Lices just south of the church of Saint Trophime (next to the Parking du Centre) for a detailed map of the town centre or you are likely to overlook a few interesting sights.

Despite the two years he spent in Arles being his most productive period for painting there are unfortunately none of Van Gogh's works to be found in the town. You can however visit the cafe that the artist painted in his famous 'Café, le soir' painting, which has made great efforts to retain its original appearance and is in the Place du Forum (it was not a cafe for most of the 20th century but in the 1990's it was redecorated as in the famous painting and reopened as a cafe). The number of people taking photographs of this cafe make me think it is probably the most visited place in Arles!

The Place du Forum is also the lively heart of medieval Arles, so a great place to come back to for a coffee after exploring the city.

One sight in Arles that is interesting is the Espace Van Gogh which has a small courtyard recreated exactly as it was painted by Van Gogh in 'Le Jardin de la Maison de Santé a Arles'. This location was once the mental hospital that Van Gogh attended and the painting is one he painted from the balcony outside his hospital room. Some of the bushes are gone and the little hut the nun is walking away from is no longer there, but otherwise, you are standing in the shadow of his painting.

This is a lovely idea that works very well at putting you 'in the footsteps of Van Gogh' and is in a tranquil place away from the bustle of the city streets.

You can also visit the Foundation Vincent Van Gogh at the Palais de Luppé (between the Arènes and the Theatre) that has a good collection of 'tribute to Van Gogh' works by other modern painters and artists including Francis Bacon, Lichtenstein and Rauschenburg.

Moving on from Van Gogh, the Museum Arlaten in Arles is a museum of the history of the region and has some very interesting displays and artefacts, especially in the 'Salle des Rites et Legendes' (Hall of Rites and Legends) 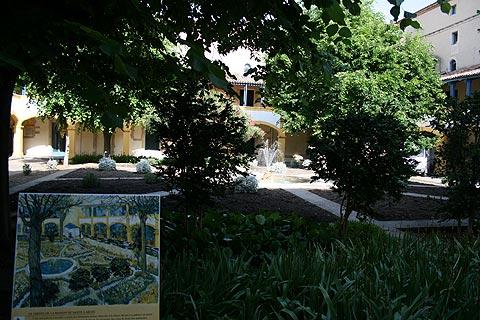 A good time to visit Arles is during the Saturday market, with the extra colour and activity it brings to the town. The garden d'été (summer garden) near Arles Tourist Office is a nice shady park with a children's play area.

A couple of kilometres outside Arles, 11th century Montmajour Abbey and the associated 12th century cloister is a listed French National Monument and makes for an interesting side trip from the town. Nimes is also close by and also has interesting Roman and medieval monuments: see the Nimes guide for details.

For a change of scenery you can travel to the nearby Camargue region, a natural marsh area with flamingoes and wild horses among the wildlife to be seen.

Map of Arles and places nearby

Visit near Arles with France This Way reviews

Plan your visit to Arles, Bouches-du-Rhone

Regular market(s) are held in Arles each Wednesday & Tuesday & Saturday & Friday. (Markets are held in the morning unless stated.)

The French version of this page is at Arles (Francais)